The attendees at the International Business Council (IBC) of the Chattanooga Area Chamber of Commerce were a diverse mix of nationalities, professions, expats, and industries. The annual meeting of the IBC, the Chamber's newest council, attracted students, family members, colleagues, and executives. The diverse crowd illustrated the broad participation in Chattanooga's national and international booming growth.

Chattanooga has a history of solving problems, turning them around, and growing exponentially. The Chamber's VP of Economic Development Charles wood, spoke about that successful growth. Billions of dollars have been invested in the area in the past decade. This past year alone, Chattanooga has seen the largest Chinese investment in the state of Tennessee and an embassy commercial delegation is doing further research on relocation to the area.What happens when these companies come to Chattanooga? The challenges for the international employees and their families were the topic of the evening's discussion, Beyond the Job: Is Chattanooga Supporting International Business Families? 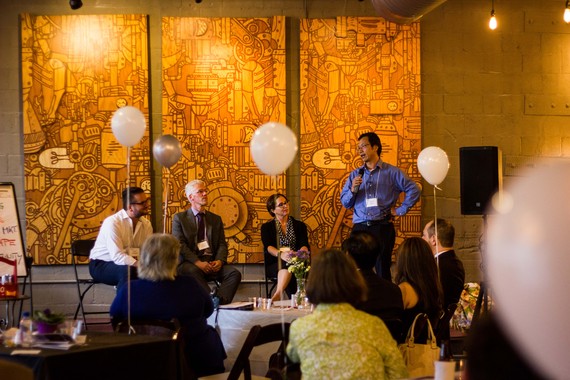 The panel was moderated by Christian Hoeferle (The Culture Mastery), who describes himself as German by birth, American by choice, and Bavarian at heart. The panelists included Helge Nestler (Wacker Chemical), Frank Yin (MLILY), and Megan Hanewald (Volkswagen). The expats, or Foreign Service Employees (FSEs), shared their stories of coming to work in the Chattanooga area, which they now call home.

Helge Nestler described the many years of preparation by Wacker before the company decided to locate a new plant in Tennessee in 2010. Helge relocated here the following year, bringing his wife and three children who didn't speak English. He smilingly described how the friendliness of neighbors was a big factor in getting settled. They brought gifts of groceries, brownies, and a gold fish. He highlighted the role of the company's Human Resources Department which recommended schools with the best environment for transitioning. The children learned English quickly and, much to the amusement of the audience, speak it with a Southern accent.

Frank Yin worked in China in international relations and then for manufacturing companies. His wife was a tourist guide and met a group from the University of Tennessee at Chattanooga (UTC) which led to a scholarship for her to study here. Frank followed her, without having a job, and became a waiter before going back to school himself. He soon became an accountant/auditor with the Elliott Davis Decosimo Accounting firm, one of the top financial consulting firms in the Southeast and in the U.S. When Chinese companies started to relocate to Chattanooga, Frank found his dream job working for one of them.

While not an expat, Megan Hanewald is an American who became an exchange student as a teenager, studied in Germany and became a Fulbright Scholar. She's been in Chattanooga for eighteen years and was eager to join Volkswagen and welcome them here. She acts as a VW global assignment specialist for employees and their families. As the only person on the panel whose native language is English, Megan was particularly articulate advocating on their behalf.

Several themes emerged as most challenging for internationals coming to the area. The first focused on education. There needs to be education for children that is comparable to what they receive in their home countries. There are about 100 FSE children in the school system who must keep up with both the local curriculum and the international curriculum. Students often struggle on their own, attempting to excel both here and in their home country as preparation for if and when their families return. There are currently only two public high schools in the area with an International Baccalaureate (IB) program that can assist them. A family must live in those school zones to take advantage of the IB programs.

At this point, the discussion turned to the second theme: finding affordable housing. Americans don't usually rent homes, they buy and sell them. Rental homes near the IB schools are extremely expensive. In addition, if students remain and attend the public university, they do not receive in-state tuition fees. FSEs are frustrated and many feel exploited.

A third theme emerged concerning the FSE spouse expats. The days of one working partner and one non-professional partner content to be unemployed are no longer. The ability of the spouse to find work and key to a successful assignment. Language classes and spouse support groups are increasingly common. Having company in the settlement process prevents the isolation that is all too common when the working partners leaves for the office. Having job prospects mean that education and experience will not be wasted or trivialized.

Last, but not least, is the red tape. Expats spend countless hours on getting their social security numbers, insurance, drivers licenses, and credit cards. One of the panelists reported that it took him eight years to get his Green Card. Despite the time and energy spent, the panelists were philosophical about the red tape and accepted it as par for the course of international relocation.

Yet, they appreciate the help of Human Resource Departments, culture coaches, relocation consultants, and friendly neighbors. There is hope that the community will adjust even further in the future as the numbers of international companies increase. One option is for for international companies to enter into the business of buying and selling homes to relieve the housing challenges. A second option is for additional public schools to adopt IB programs. A third possibility is to increase the hiring of spouses and invite them to join civic organizations where they can network effectively.

As for being neighborly, I have yet to see a gift of brownies go unwanted, not to mention a goldfish for the kids. The message to the audience was that we can all bring something of value to the international table, and the effort is much appreciated. That's a message that can enhance the expats experience and the success of economic development throughout the Chattanooga region, and well beyond.