When it comes to personal happiness, Spanish cities make it to the top of this year's city ranking. Madrid gives expats the warmest welcome of all.

Madrid is the third-best city to live abroad according to previously unreleased data from the third annual InterNations Expat Insider 2016 survey. With more than 14,000 respondents, it is one of the most extensive studies ever conducted to explore the general living situation of expatriates. Spanish cities are popular among expats. The latest InterNations survey finds that despite the poor rating in the Personal Finance Index, people consider the quality of life in Madrid or Barcelona to be exceptionally high. It turns out that Barcelona is even home to the happiest expats worldwide out of all the cities featured in the survey. In the overall ranking, Madrid has made it to the global top 3, at third place, while Barcelona comes in on a rather more mediocre 11th place. 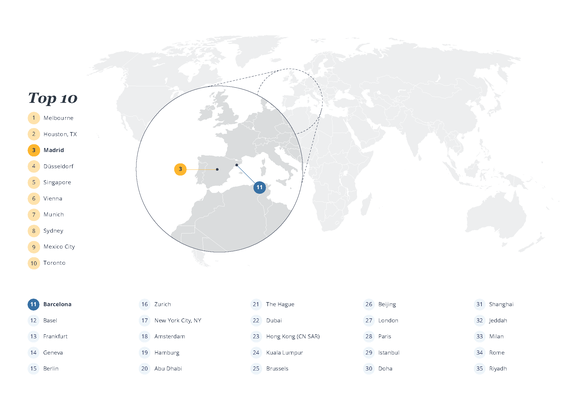 Spanish Cities Are the Most Welcoming
Spain proves itself to be a welcoming place for expats, with Madrid ranking first and Barcelona coming in fourth place in the Feeling Welcome subcategory of the Ease of Settling In Index. Over three-fourths of respondents in Madrid (77 percent) say they feel at home in the local culture, and 71 percent agree that it is relatively easy to make new friends in this city: thus, Madrid also ranks first in the Finding Friends subcategory. Moreover, the Expat Insider 2016 survey finds that expats in Barcelona are the happiest: the city comes first in the Personal Happiness subcategory. In fact, 70 percent of the respondents are in a happy relationship, and 64 percent are overall satisfied with their work-life balance. Another reason that contributes to people's happiness in Barcelona might be the warm and sunny climate, which is rated positively by 95 percent of the respondents. Indeed, 69 percent couldn't be any happier with the weather on the shores of the Mediterranean.

Barcelona Top in Leisure Activities
While the Spanish capital ranks first when it comes to general satisfaction with life abroad, with 93 percent of respondents saying that they are overall happy with expat life in Madrid, Barcelona finds itself in fourth place. Madrid also outperforms Barcelona when it comes to the friendliness of the local population, the cities ranking second and sixth, respectively, for friendliness. Both cities, however, are well above the global average 67 percent of expats rating the general friendliness of the population positively: 88 percent in Madrid and 80 percent in Barcelona give this factor a favorable rating. Barcelona is the number one city for enjoying a rich variety of leisure options. An overwhelming 60 percent rate this factor as very good', double the global average, and 95 percent overall feel positive about the leisure options available in Barcelona. However, Madrid follows right behind and ranks second for leisure options, with 92 percent rating this factor positively.

When it comes to the Working Abroad Index, both Barcelona and Madrid could do a lot better, ranking 32nd and 29th. Especially in the Job Security subcategory both cities occupy the lower ranks: Madrid ranks 32nd and Barcelona even 33rd. Only 44 percent and 49 percent, respectively, rate their individual job security in Barcelona and Madrid positively, and the results are even worse when it comes to the general state of the economy: merely one-third of the expats living in either city gives this factor a positive rating. At least, both Madrid and Barcelona appear to be fairly affordable, placing third and eighth, respectively, in the Cost of Living Index. In fact, not a single respondent in Madrid rates this factor as very bad.