Melbourne tops the list of the best cities to live abroad according to previously unreleased data from the third annual InterNations Expat Insider 2016 survey. With more than 14,000 respondents, it is one of the most extensive studies ever conducted to explore the general living situation of expatriates. This year, Melbourne ranks as the top expat city, with Sydney also making it into the top ten on eighth place. The latest InterNations survey found that despite negative feelings about affordability, the warm weather and the friendly attitude of the local residents, combined with a great work-life balance, make Melbourne and Sydney top destinations for moving abroad. 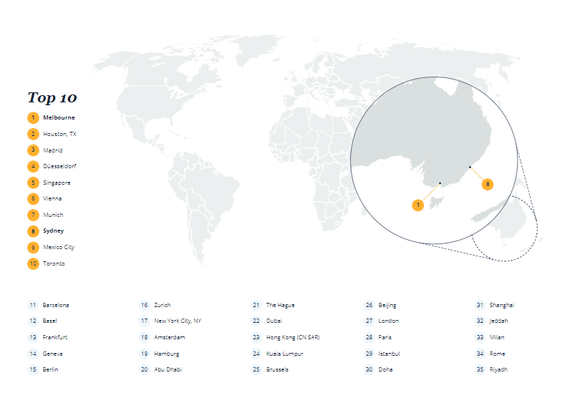 A Satisfying Work-Life Balance
Overall, expats in Australia rank the country as the tenth-best destination out of 67 in the Working Abroad Index. The majority of expats feels happy with their work-life balance, as 71 percent say they are content with this aspect of life abroad. So it is no surprise that both Melbourne and Sydney do well for work-life balance. Melbourne takes first position out of 35 cities worldwide, with 79 percent of respondents saying that they are satisfied with their work-life balance. While the respective figure for Sydney is significantly lower at 69 percent, this result is still noticeably above the global average of 60 percent. Expats also find that there is an abundance of leisure options for their time off from work -- Sydney and Melbourne rank third and fourth respectively in the Leisure Options subcategory of the Quality of Life Index.

Warm Weather and a Warm Welcome
The satisfaction of work-life balance in these two cities and the great leisure options are accompanied by glorious weather: 75 percent of the expats living in Melbourne rate the weather positively, and an astoundingly high 91 percent of respondents in Sydney are happy with the local weather. Both Sydney and Melbourne rank highly in the Ease of Settling In Index, too, placing ninth and fifth respectively. Melbourne also ranks fifth for feeling welcome and fourth for friendliness; Sydney follows not far behind, ranking seventh in both subcategories.

The warm welcome in these cities is not surprising as more than seven out of ten of expats living in Australia (71 percent) say they are happy with the friendly attitude towards foreign residents. The local figure for Sydney is exactly the same while Melbourne even tops it with an impressive 83 percent. In fact, 30 percent of all respondents in Australia are so happy with their lives that they have obtained the citizenship of their destination, noticeably more than the global average of 11 percent

Expats Happier in Melbourne
Sydney and Melbourne differ most significantly in two key areas; personal happiness and personal finance. Melbourne ranks fifth for personal happiness in stark contrast to Sydney, which ranks much lower on 15th place out of 35. In Melbourne 19 percent of respondent's rate their overall happiness as 'very happy' and only 5 percent respond negatively. In contrast only 9 percent of respondents in Sydney say they are 'very happy' while 7 percent respond negatively.

Not only are expats apparently happier in Melbourne, but they are more satisfied with their personal finances, too. Melbourne comes in on an average 14th place in the Personal Finance Index, whereas Sydney does far worse: ranking 30th out of 35 cities, it appears in the bottom 5. In Sydney, only 53 percent of respondents feel positive about their financial situation, which is considerably lower than the global average of 64 percent.