When a playwright's quill strikes against sheets of paper, a theatrical piece is what surfaces. Give that same dramatist's tool in the hands of Anwar Maqsood, and the quill turns into a wand. A wand that spreads sparks every time it's struck. One such recent venture of the Maqsoodian school was Siachen, directed by Dawar Mehmood; and when the two pair up, the duo comes out with theatre that keeps the audience hooked to every shred of fibre there is. 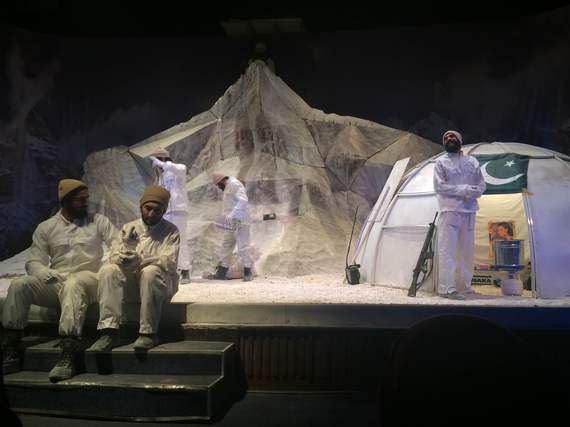 Maqsood is known for his masterstrokes in the field of satire and wit. Siachen is another proof of what the artiste comes out with for the public every time a play is penned by him. And it needs no proof for this piece of theatre ran more than 100 consecutive shows, every time with a full house. The longest glacier of the fearsome Karakoram range, the title of the play was enough to invite members of Karachi's populace.

The curtain doesn't unfurl at the start of the play for gloom is what envelops every corner of the Art's Council's auditorium, the venue where the play was enacted in Karachi. With a child telling his father not to go to the savage coldness of the north to a sister pleading her brother to return in time for her wedding, farewell notes guide through the playhouse's audience with the spread of a spotlight. 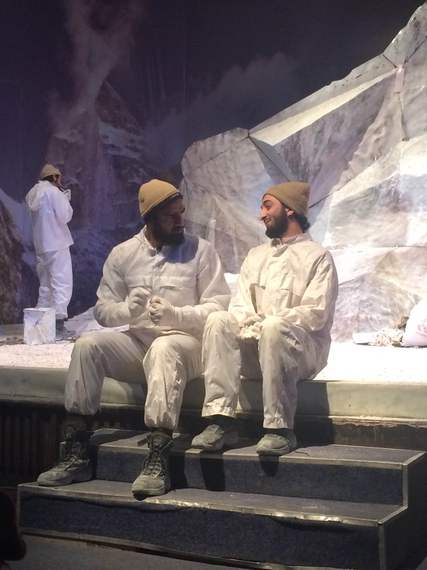 To experience the effect of the brutal conditions of that which lies miles away up north of Pakistan, the cast and crew of the team travelled to witness the conditions of the brutality of what the soldiers from both sides of the Line of Control (LoC) experience by staying there and being isolated from the mundane activities to instill in them feelings which are experienced by those who from decades are up there protecting the nation's sovereignty.

The drapes when lifted, bring to view a set that has a snowcapped peak in the backdrop followed by an igloo which has a Bollywood actor's, Kajol, poster peekaboo-ing. With soldiers discussing the travails of the bitter cold, with water freezing almost instantly to weak radio connections, the topic of discussion is none other than the Englishman's game which has the two neighbours' soldiers in a spark of a debate. The start of the play too, has a tiff between the two soldiers commentating through what happens through the next ball.

With immense power in the dialogues, the audience experiences no less than a roller coaster of sentiments. And when the ride is driven by a mighty pen, it surely allows the viewer to experience it in all its emotional dimensions. From roars of laughter to when the heart's strings are pulled resulting in a wee of tears, to say Siachen is a powerhouse of emotions, with the right amount of wit and elements of tragedy, would not in the least bit be wrong.

Between gun shots, and chills that envelop all those witnessing theatre's history, a striking moment ensues when Yasir Hussain, a striking theatre actor, emerges on set, in the form of an Indian Bihari. The fluency with which he speaks the tongue, is spot on and it is Hussain at his best. 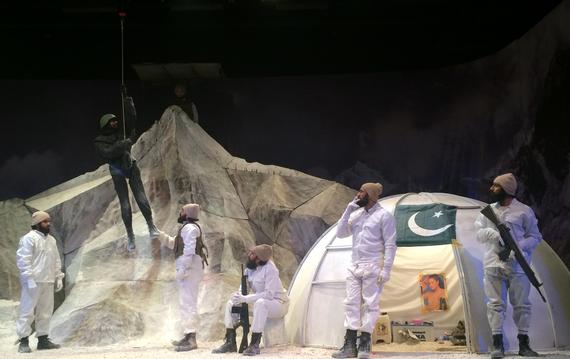 The hardships and the stark atrocities of the climate, Mehmood and Maqsood tried bringing a chunk of it for the audience to witness with tear-jerking dialogues, an instance of one being, where a soldier talks about preferring a deep freezer for the cold in it would be less than what is experienced out in the open. 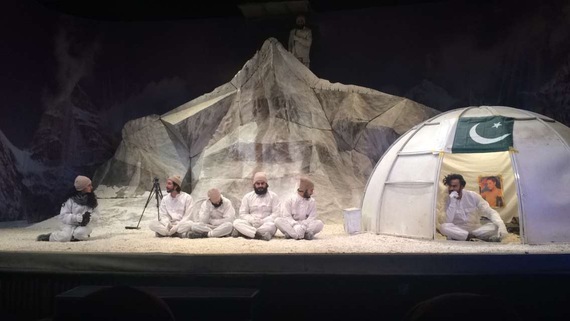 The rendition of the national anthem which sews up the fine aesthetics of this piece of artistic theatre, rekindles another round of emotions as the poetic beauty of Hafeez Jullundhri's pièce de résistance reign over the goosebumps which were left by the combat that results in a shower of red body fluid.