Since World War II, we have lived in a world of experts and expertise, and for an expert, not knowing gets a bad rap. Actually, its worse than that. For an expert, the very idea of not knowing challenges one's self-image, one's entire story of oneself. After all experts are people who have learned and now know a lot about some particular subject, and experts are judged as good or bad depending on the extent of that knowledge and their ability to apply it.

There are three parts to this. The first, is the idea of knowing everything (or quite a lot) about something. The second is how one comes to know, and the third is the idea of judging and being judged. Let's examine each and also consider two practices that can serve us come to grips with these matters.

Built into the idea of being an expert is the idea that one knows a lot about one's domain of expertise. This seems natural enough, and much of professional training is devoted to mastering what are generally considered to be the core competencies of the field, the so-called basics. Of course, any discipline worth its salt requires development beyond entry level skill, and herein lies the rub.

The notion of being an expert wouldn't be so troubling if we could contain or bound the notion of sufficient knowing. That is, if we could limit our appetites for knowing a reasonable amount at a reasonable stage in our development then we would be OK with what we know and our rate of increase in knowledge, both. But human beings being human beings, our conception of our own expertise often suffers from a kind of mission creep; we hold ourselves accountable for more and more until, for some, the idea not knowing anything becomes, itself, unacceptable.

Four Stages of Learning or Competence 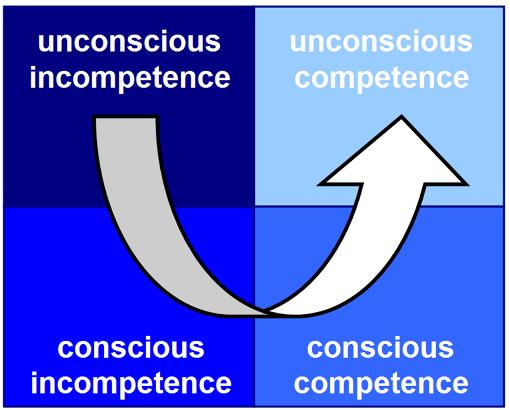 These are often plotted on a 2×2 graphic like the one shown (original link here).

The key step in this process is stage two, conscious incompetence. Becoming and acknowledging the possibilities in new knowledge or practice are the starting gate of learning. Anything that blocks awareness of the dividing line between knowing and not knowing can be an obstacle to learning, and herein lies one difficulty with expertise mission creep.

As our expectations of what we should know grow, one way our mind deals with mission creep is to simply deny that we don't know. People ask us questions, we make up answers-theories based on what we already do know -- and life goes on. In this way we remain in stage one, unconsciously competent, relatively blissful about our ignorance, but also not at the starting gate of learning.

A second way we deal with the enlargement of our expectations is to judge ourselves, sometimes harshly, about the things we don't know (c.f., the choice map, here). Unfortunately, when we are judging, we are not open-we are not learning-and although we are in the stage of conscious incompetence, being in harsh judgment of our incompetence again holds us away from the starting gate of new knowledge.

Two Practices for Peace and Learning

So what's an expert to do? The very notion of "expert" seems to demand an insatiable appetite for knowing more and more, and yet this logic seems to leave us (a) unpeaceful or (b) unready to learn. Fortunately, there are two simple practices that can help:

Tip for improving: To help enforce the practice at first, give yourself a daily quota of three or five or 10 times of saying "I don't know" during the day. At first, this may be hard to do, but as you practice, it will be easier and easier to come to grips with not knowing.

Practicing these two practices together can be a powerful way to tame expertise mission creep and keep on learning.

The Beauty of Not Knowing

We live in an age that values expertise, yet expertise often brings with it certain side effects around not knowing and learning. This post has discussed certain aspects of the logic of the story of expertise and considered two practices that can help short circuit some of the deleterious consequences of that logic. The practices are straightforward and they can help bring more peace and learning to life. They also can be a gateway to increased vulnerability and wholeheartedness (here) in ways that can also be beneficial. The practices are easy to try, and not difficult to sustain. Why not give them a whirl and see what they can do for you?