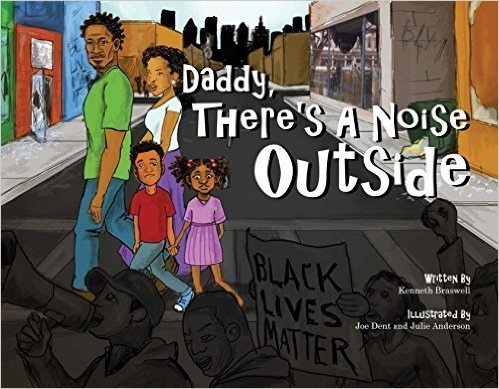 Explaining our chaotic world to kids is a challenge every parent faces -- even more so during these times of political and racial unrest. That's what Fathers Incorporated founder and community activist Kenneth Braswell discovered when his then 6-year-old son asked him about the Baltimore protests surrounding the indictments of Freddie Gray's death. At first, Braswell didn't know how to answer -- but his explanation grew into a beautiful and important new children's book, Daddy, There's a Noise Outside.

The story of two children who are awakened in the middle of the night by noises outside the window of their inner-city home and spend the next morning talking to their mom and dad about the protests in their neighborhood, the book breaks down situations like rioting in a way that even young children can understand -- which is quite an accomplishment, as any parent of an inquisitive child knows! We spoke with Braswell about his journey as an author, and about the public's reaction to the book (formally released this year on Martin Luther King Jr. Day).

The Stir: What inspired you to write the book?

Kenneth Braswell: I was in Baltimore for another event at the time of the Freddie Gray indictments, and folks started calling me in for meetings to see what we could do to help. CNN was all over it, my wife and son were home that day looking at the TV and my wife said to my son, "Daddy's there" -- and my son's question was, "Why is he there?" There were police, troopers, all kinds of things swirling around Baltimore that day. So my wife's answer was, "Wait until he gets home; he'll tell you."

At the time my son was 6 years old -- he doesn't forget anything. He's very astute, very logical, very curious. He doesn't miss a detail! So when I came home, I don't think I was fresh in the door when he asked me why I was in Baltimore with all those police. I said, well, the people were protesting. His question to me was, "What is protesting?"

I still had my suitcase in my hand! I said, "Give me a minute to get settled." I realized I had an adult answer, but I didn't have a 6-year-old answer. I was struggling with how to explain not why it was going on in Baltimore but what was going on. So I started talking.

Basically, I didn't explain the specifics around the Freddie Gray incident; I felt it was more important for him to understand why people protest in general. So I explained the definitions around protest, how it's typically a result of something somebody feels strongly about or disagrees strongly with. I was searching in my head for the analogy to help him understand and something hit me.

I said ... You know how sometimes when Mommy and Daddy tell you to do something and you don't want to and you walk away and roll your eyes and go to your room? That's what protest is. When something is going on you don't agree with and you act upon it. There are so many different ways you can protest. You can roll your eyes, go in your room, be silent, scream, all of those things.

More from The Stir: 17 Books by Black Authors Every Kid Should Read Right Now

He regurgitated it back to me and I realized he understood what he was talking about, and it relieved me. He understood that in Baltimore, everybody was upset and expressing themselves in different ways.

The Stir: How did your own childhood influence the way you spoke to your son about protesting?

KB: I was born in 1961 in Brooklyn. I was the same age as my son at the time of the Baltimore protests when Martin Luther King Jr. was assassinated. I don't remember what or why, but as a 6-year-old I knew something dramatic happened because I can remember the atmosphere and how it felt. So much so that one day during a fire drill at school we crossed the street and I remember looking up and seeing men on top of our school with rifles -- come to find out they were Black Panthers protesting what had happened around some of the things going on in NYC at the time.

What I recall is that my mother and all my teachers never explained to us what was going on in that particular situation. I don't even remember having a recollection about the Civil Rights era until I got into high school in the mid-'70s, and I had lived through it!

So I think it's important -- whether you're black, white, green, or plaid -- that all children should have an awareness of their environment, particularly now when we live in such a diverse society. It's really important that our children understand compassion for people who don't live or look or act like them but are in the same country, and that they be very conscious of things that are going on with other people. Those things might not impact you, but you have to have some level of compassion for what they're going through.

More from The Stir: 25 Top Chapter Books to Read With Your Child at Bedtime

When you go into my son's school [in Northern Georgia], it looks like "We Are the World" -- there's black kids, white, Latino, Jewish -- and that got me thinking about how beginning to have him understand and embrace other cultures is more important for him than it ever was for me.

This whole notion of race in this country, just because you don't talk about it doesn't mean it's gonna go away. We need to start age-appropriate conversations about race and diversity when kids are still young; we can't wait until they're in high school until we talk about society -- and even then, when we do, we're talking about history.

The Stir: How have people reacted to the book so far?

KB: It's been great. Schools are buying it, libraries are buying it, people in Utah, people in places where we're like, I didn't even know there were any black people there! The comforting message it sends to me is that parents overall care about how their kids are interpreting the world around them.

We're not specifically talking about #blacklivesmatter, we're talking about what happens when people disagree. And what is more heartwarming for me is that we've created a book that has created a platform for parents and grandparents to be intimate and reach that level of bonding.

Daddy, There's a Noise Outside is available for purchase at the Fathers Incorporated website and on Amazon.

More From The Stir:

10-Year-Old Has No Time for Bullies, Too Busy Being Fierce At Fashion Week