From Miley Cyrus to Jaden Smith or Ruby Rose, the influx of celebrities eschewing gender with diverse expressions has given way to ordinary non-famous folk, like myself, coming out to friends and family. Which has left many of you wondering:

What exactly is genderqueer? How is this an identity, distinct from gender roles? And how can you understand this experience?

Genderqueer is an umbrella term for any gender identity that is not strictly male or female. Because it encompasses so much variation, every person who identifies as genderqueer defines their gender differently. 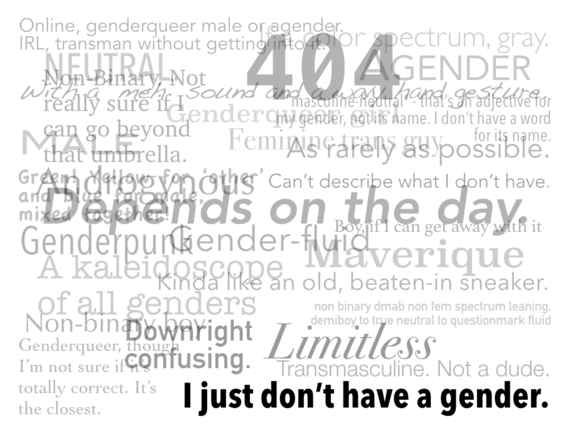 How do you describe your gender?

If someone has chosen to come out to you as genderqueer, it doesn't mean they have figured everything out. For a lot of people who identify as genderqueer, their gender identity and the way they express it continues to evolve for a number of years. This includes clothes, pronouns, name, physical transition, medical transition and other stuff.

It's not necessarily that genderqueer people are confused, it's just that discovering who you know yourself to be can be a long process, which often involves unlearning years of what we thought gender was supposed to be.

You're going to have to ask a lot of things, like what name they prefer, how you should address them in public and in private (because a person can be out to various degrees to different people), and most importantly, what genderqueer means to them.

After someone is comfortable enough to come out to you, keep checking in about any changes. If you don't know which pronoun someone uses, you're going to have to ask. Seriously, just say "what pronoun do you use?" In fact, even if you think you know someone's pronoun you should still ask, because gender expression -- the way someone looks on the outside -- does not always match gender identity -- the gender they feel on the inside.

It's always better to ask than to assume.

Know that you will probably make a lot of blunders along the way. All of us started out at the beginning. As long as you are respectful and honest with your intentions, your actions will be appreciated.

Explaining Genderqueer to Someone Who Is Not

I can understand feeling like you should be a different gender from what your parts are, or from what you were raised as, but I don't understand what it would be like not to feel like either gender. Is it about the social constructs around what society tells you that girls and boys/men and women should be like? Because I understand rejecting those, not wanting to like cooking or the color pink or high heels.

-- Question from a reader

Start by asking questions; but this time, ask them of yourself.

Let's assume you are a woman, and that you're comfortable identifying as a woman. But perhaps you don't like to wear high heels, or to cook, or you hate pink; you reject stereotypically "feminine" things. Yet you still feel like a girl.

Why? What makes you feel this way? Take a minute to actually articulate this, and hopefully you can see how difficult it is to explain why your gender identity is what it is to someone else.

What if I told you that tomorrow you will feel exactly the same, and see yourself in the same way. However, everyone else sees you as a man, treats you as a man, and expects you to do stereotypically man stuff.

It's hard to realistically imagine this, so let's do an experiment. Walk into a men's clothing store and try on some clothes. Seriously, try it. Gauge your comfort level, your sense of safety. Introduce yourself to someone as "John." How does that feel (wrong, weird, awkward)? How do other people treat you (with disdain, with surprise, with ridicule)? Now imagine looking at yourself in the mirror and seeing a beard, or stubble, or having a buzz cut. Nobody is staring at the mirror except you. But how does looking like this make you feel?

Transgender people experience something similar: a disconnect between their assigned sex at birth and the gender they are. In addition, there is a mismatch with how other people see them and what is expected of them.

Transgender people who are binary-identified find comfort on the other side of the gender spectrum. For instance, someone who was assigned male sees herself as female, and feels at home looking like, being seen as, and being treated as a woman. There are still infinite variations of trans women, as there are infinite ways to express womanhood and femininity.

However, some transgender people are distressed when putting themselves in the female side as well as the male side. Neither box feels quite right. Recall our thought experiment, and imagine feeling this sensation of discomfort, awkwardness, or anxiety when thinking of yourself as a woman as much as when imagining walking around the world as a man.

What does it really mean to be a man or a woman?

Gender identity goes beyond gender roles. It runs deeper than clothes, hair, makeup, colors; although these are means to express it, they do not make your gender.

Gender identity is a feeling: something internal, intangible, and very difficult to explain with just words.