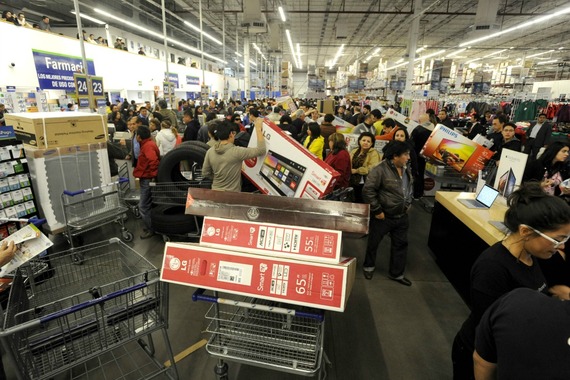 The disassociation between consumer confidence and consumer spending habits over the past two years has been one of the Mexico's most interesting economic puzzles. The economy remains stuck in a three-year slowdown (GDP contracted in the second quarter by a sequential 0.3%), tighter fiscal and monetary conditions are in place as a result of low oil prices and a weak peso, and the string of corruption and impunity scandals surrounding the political class (and particularly the ruling PRI) appears to have no end in sight, even despite the passage of anti-corruption legislation. But despite this, Mexicans are on a spending binge. Retail sales are in the double digits, and overall private spending appears as the only bright spot amid so many other lackluster indicators. Mexicans are known to be cynical to a fault especially on political or economic matters, but barring some dubious psychological explanation (like curing economic woes by shopping), what is behind this consumer paradox?

Mexico is currently undergoing a consumer spending boom that began in 2015 and that appears similar in scale to the brief period of stellar growth that followed the 2009 global recession (the Mexican economy grew by over 4% on average in 2010-12). According to ANTAD, one of the country's main retail associations, retail sales grew by a nominal 10.3% in 2015, of which same-store sales (which exclude sales from newly opened stores) were up by 6.7%. This trend has not only continued but intensified in 2016; retail sales are up by 10.6% in the January-July period, with same store sales at an impressive 7.3%. In real terms, growth has been even better; Mexico has enjoyed historically low inflation rates since 2015 and discounting average inflation during this period, retail sales have been up by 7.6% in 2015 and 8% so far in 2016. That's over triple the rate of GDP growth.

The consumer boom is explained by three main factors. The first is, as mentioned above, historically low inflation which in 2015 averaged 2.7% (including a record low rate of 2.1% in December) and in January-July of this year has averaged 2.6%. Mexico's inflation tends to hover in the upper range of the 2-4% inflation target range set by Banxico but this is the longest stretch on record where it has consistently remained closer to the bottom. The second factor is the surge in private credit. Using IMF data, overall private credit has been up by an astonishing 19.5% on average since January. Data from the bank regulator, the CNBV, has overall credit up by 15.2% in June, and with consumer credit rising by 13.1% (which remains double digit territory if taken in real terms). 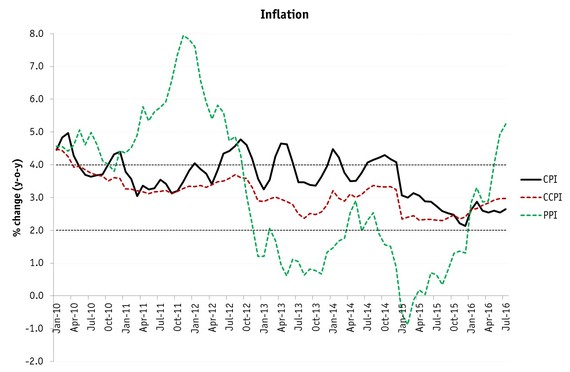 The third and arguably most important factor, however, has been the increase in remittances in peso terms due to currency depreciation. Although remittances in dollar terms have risen in recent years (after remaining stagnant since the 2009 global recession) and have been up by 8.9% year on year in January-June, in peso terms, they are up by an astronomical 30%. Last year, the rise was almost as dramatic, with remittances in peso terms up 25.1% versus just 4.8% growth in dollar terms. Remittances tend to be received by lower- and middle-income households which have a higher marginal propensity to consume. As such, it is likely that much of this extra income is spent. 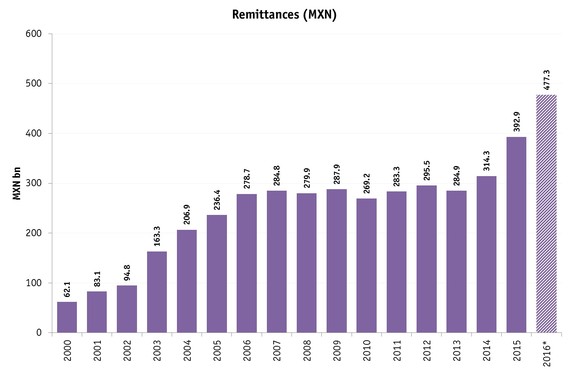 Source: Banxico: Figure for 2016 is annualized based on January-June data

But Consumers Are in a Bad Mood

Despite the consumer boom, Mexicans remain broadly pessimistic over current and expected economic conditions. The consumer confidence indicator currently remains in negative territory and saw a major slump in July (likely a reaction to post-Brexit budget cuts and Banxico's stronger-than-expected rate hike). However, the most interesting aspect about consumer confidence in Mexico is the divergence between household and national confidence, which does not appear to have a historical precedent. In theory, both confidence levels should be broadly similar; there is no reason to believe that on aggregate, households should see their own confidence levels any better or worse than the national levels. Indeed, before 2013, both confidence levels tracked each other relatively well, even throughout the 2009 recession. After 2013, however, they have begun diverging and are now considerably apart: there is an 18.1% difference between household and national expectations, and an almost equally large 15.3% difference between household and national sentiment. 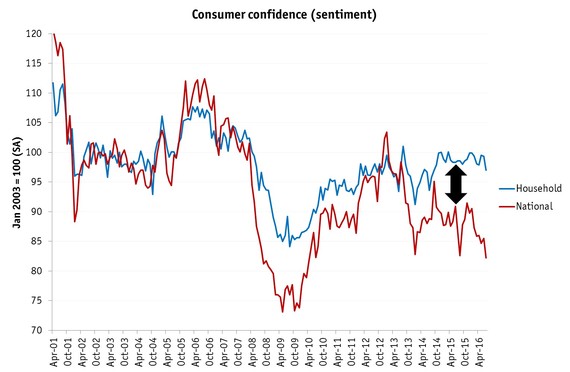 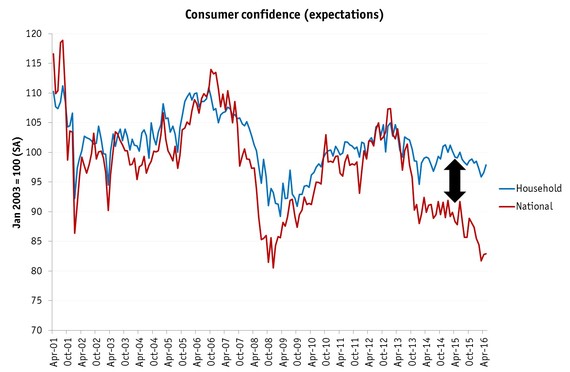 It's difficult to see this trend and not assume that Mexicans are simply expressing excessive pessimism over the economy while hinting that their own household conditions are not actually that bad. This is not uncommon in many polls in the US or Europe on crime where, for example, people consistently claim that their country is getting more dangerous but their neighborhood isn't (the effect is magnified if there's been a high profile crime that has gotten significant media attention). Donald Trump's doom-and-gloom speech at the Republican National Convention is a textbook case of how negative national sentiment can be used for political gain even if there is little statistical evidence to support it. It is also likely that economic pessimism is mostly reflecting political pessimism, particularly over rampant corruption and impunity that is constantly in the headlines.

Pessimism Is a Problem in Itself

In a speech back in April, Mexican president Enrique Peña Nieto blamed his rock-bottom approval ratings on "bad social humor". The ill-timed (and widely scorned) comment nevertheless contained a grain of truth, if only on the economic side. The discrepancy between Mexico's dynamic spending patterns and depressed consumer confidence - which in most cases is a very accurate leading indicator of economic performance - cannot be explained otherwise, and has lasted far too long now to have been a statistical fluke. Unfortunately, it may only be a transitory phenomenon. Inflationary pressure is building up, as evidenced by producer price inflation (which usually passes off to consumers a few months later) of 5.3% in July, and even just a slightly stronger peso will prevent remittances from rising in dollar terms the way they have over the past two years. Strong bank lending could last longer, but risks fueling a rise in household debt if it isn't supported by rising incomes.

By pulling the rug on the factors that are underpinning Mexico's consumer paradox, we will return to the situation where pessimism isn't just a sentiment, but a driver of weak economic performance. And without an offset from investment or trade, the result will be that Mexico's slowdown will persist for longer, at least until 2018. So far during Peña Nieto's term, GDP has expanded by just 2.1% per year on average, which in per capita terms translates into a paltry 0.8% - far too low to address the country's pressing socio-economic needs or to give a sense that prosperity is around the corner.