When we think Nevada, our minds often go to Las Vegas. But not everything happens in Vegas. The Silver State offers way more than just Vegas and unlike Sin City, what happens in Nevada doesn't always stay in Nevada.

Such is the case with the annual Burning Man festival. The buzz on it has gone way beyond Nevada's borders and the event is now an established annual mecca for 50,000 people from all over the world who converge in the Black Rock Desert to set up a temporary city on that dusty terrain. It's known for radical self-expression and self-reliance and includes the ritual burning of a wooden effigy, from which the festival gets its name. Burning Man has become so popular that it was sold-out for the first time last year in its 25-year history and is sold out again this year.

Beyond the well-known Vegas Strip and the famous gathering on the "playa" of Burning Man, there are plenty of other road trip opportunities and events to explore that are more off the beaten path.

In fact, Nevada just kicked off its new campaign "Discover Your Nevada" which encourages Nevadans to explore their own vast state, which is filled with Wild West history. Gov. Brian Sandoval and Lt. Gov. Brian Krolicki have pledged to take a few road trips this spring to several of the places we mention such as the ghost town of Rhyolite, as well as the ruins of Fort Churchill near Yerington and the mysterious town of Rachel on the Extraterrestrial Highway. They liken their road trip to the Bob Hope and Bing Crosby road series, calling theirs "Road Through Nevada."

"Travel is the No. 1 contributor to our state's economy and when we can increase the number of travelers dining in roadside restaurants, buying tickets to shows, visiting museums and staying in hotels, our entire state sees the benefits," says Krolicki, who is also chair of the Nevada Commission on Tourism. "This campaign is an example of Nevadans helping Nevadans by doing something they do every summer anyway: travel."

Nevada has some devastatingly beautiful landscapes such as its oldest and largest state park, Valley of Fire State Park, just 55 miles outside Vegas. This is also one of the governor's planned stops on his road trip. The park gets its name from the red sandstone formations that formed from shifting sand dunes 150 millions years ago. Rock art left by the ancient people who were once here can still be seen in the park today. 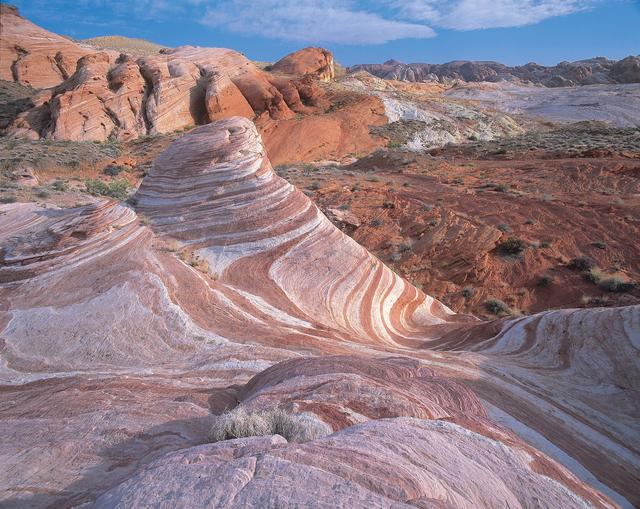 If you enjoy nature and wildlife, Great Basin National Park is where you might see bighorn sheep or wild horses gallivanting. This is also historical Pony Express territory. You can soak in the solitude nature provides and the untouched West, tour Lehman Caves or even look up at the stars with a ranger on astronomy nights at Great Basin. This is worlds away from the neon lights of Las Vegas.

The newest attraction that opened in Nevada, in February, was the Mob Museum, which was a $42 million construction project funded by local, state and federal grants.

The National Museum of Organized Crime & Law Enforcement (its more formal name) was created by the team behind the Rock and Roll Hall of Fame and the International Spy Museum. The Mob Museum is located in the old courthouse and post office building in downtown Las Vegas, a few miles from the busier Strip. It is one of the few remaining historical structures left in the city.

The centerpiece of the 41,000 square foot museum is the restored courtroom where the Kefauver hearings, that investigated organized crime in 1950, took place. The museum, which covers all things mob-related and is open seven days a week, has iconic artifacts such as the wall from the St. Valentine's Day Massacre. The Mob Museum is an important player in the revitalization of downtown Vegas and the hope is that it will help create some 13,000 jobs.

Last fall, the eagerly awaited Terry Lee Wells Nevada Discovery Museum opened in Reno. Located in Reno's former city hall, it's the only children's museum of its kind in the area. The museum is named after the late Reno philanthropist who was also the cousin of actress Dawn Wells, who played Mary Ann in "Gilligan's Island." Wells, who is also a Reno native and fourth generation Nevadan, is the president of her cousin's foundation.

If Wild West history is your thing, southeast of Reno is Virginia City. The town was born in 1859 and it was a mining area for gold and silver. This is also the place Samuel Clemens first used his pen name Mark Twain when he wrote for the Virginia City Territorial Enterprise newspaper. Here, the stops to see include Piper's Opera House, the Fourth Ward School and the Comstock Gold Mill. The Virginia & Truckee Rail Road is a ride back in time on this historic railway in steam and diesel trains. This is Nevada's most famous short line that once connected Reno to Virginia City. The Gold HIll Hotel, Nevada's oldest hotel, is located just outside Virginia City.

While many "Burners" are now planning their annual trip, there are other events in the area worth checking out for those going to and from Burning Man. Or for those contemplating alternatives, it's never too early to start planning a road trip around these events.

Foodies who like old-fashioned ribs, might enjoy the Best in the West Nugget Rib Cook-off (Aug. 29 - Sept. 3) at John Ascuaga's Nugget in Sparks, Nev. Rib cookers from around the country compete in this end-of-the-summer event and there is always the obligatory rib-eating contest.

The visually dramatic Great Reno Balloon Race (Sept. 7 - 9) is said to be the largest free hot air ballooning event in the country. More than 100 hot air balloons will participate. Last year there was a Darth Vader balloon, and may the force be with you this year as you join the average of 150,000 spectators who come to enjoy the rainbow of hot air balloons in the sky over Reno.

If you're in Reno for the balloon race and you're also an airplane enthusiast, you probably know about the National Championship Air Races (Sept. 12 - 16). Despite last year's tragedy of several deaths when a plane crashed into the stands below, this annual event, which is the only one of its kind, will go on. It's billed as the world's fastest motorsport and described as NASCAR in the sky, but a couple times faster. There are five days of racing with six classes of aircraft that fly speeds exceeding 500 mph.

For enthusiasts of the two-wheeled kind, there's the Street Vibrations Motorcycle Festival (Sept. 19 - 23) that ushers in fall. This festival is an intersection of music, metal and motorcycles. A portion of proceeds go to the Juvenile Diabetes Association.