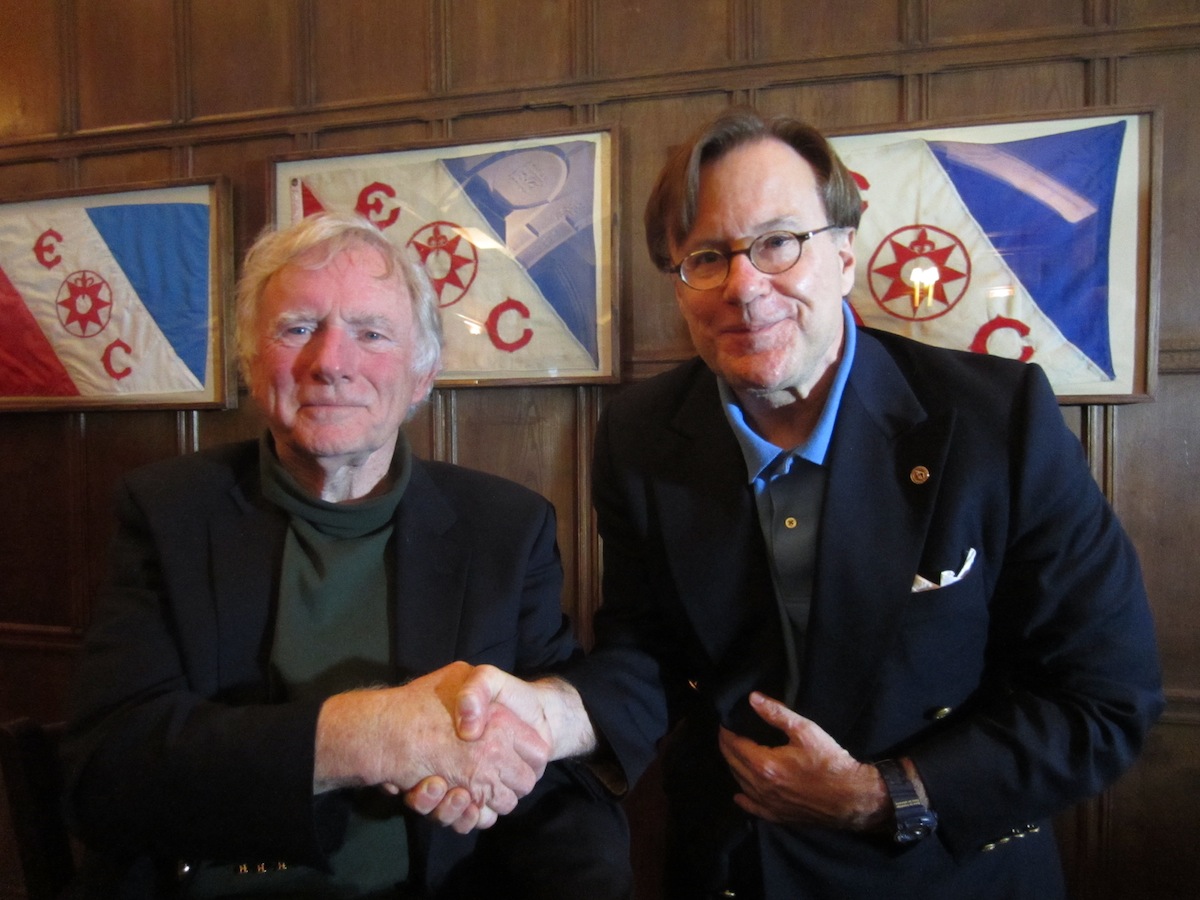 World Record holding deep-sea diver Don Walsh made an appearance at the Explorers Club (EC) yesterday kicking off the society's first-ever "Exploring Legends" seminar, a live Q and A interview series that will feature popular adventurers.

In 1960, Walsh -- accompanied by fellow explorer Jacques Piccard -- became the first person to venture to the deepest part of the ocean, approximately 35,798 feet into the Mariana Trench located in the Western Pacific Ocean.

During the EC event, moderator Jim Clash -- an adventure journalist -- led Walsh through a series of questions ranging from the Russian takeover of his North Pole expedition to what he saw at the world's greatest depths.

"I hope [the audience] appreciates what it took for a guy 50 some years ago to... risk his life and set a World Record," Clash said. "In the future, we plan to have astronauts who have walked on the moon and Mount Everest summiteers on the panel; people who have really done amazing things."

The EC is a 108-year-old society of exploration enthusiasts that includes prestigious members like Teddy Roosevelt, Buzz Aldrin, and Charles Lindbergh. Walsh is the club's honorary president.

The event precedes the EC's annual Lowell Thomas Awards dinner, a black tie affair to honor outstanding explorers. It will include a keynote address by Bertrand Piccard, the first person to complete a non-stop balloon flight around the world. He is also the son of Jacques Piccard who accompanied Walsh on the lauded dive.

Here are some of the highlights from the discussion:

Clash: Back then [before the dive] you had to find the deepest part of the Mariana Trench. How did you guys do that?

Walsh: In those days, we didn't have GPS or any type of satellite navigation system. So, how do you know where the depth is? What we used were four-pound blocks of TNT... and we had someone with a stopwatch and we'd hear [the TNT] go, 'bang,' then we'd stop the stopwatch... and that gave us an indicator. So, on an arbitrary basis, twelve seconds is deeper than five seconds. We used up a lot of TNT, and that's how we figured it out, but we still didn't know how deep it was until we made the dive and read our Gaff Gauge.

Clash: Tell us what you saw down there.

Walsh: Just before we landed... Jacques calls me over and says, "look!" And it was a flat fish, kind of like a sole. In other words, it was a bottom-dwelling fish. Before James Cameron made his dive in March, I told him, "please find that fish," because it had been half a century since our dive and all the ethologists said, "you don't know what you're looking at." So, I desperately wanted James to find another fish to ratify our sighting.

Clash: You call that place your office, but were you at any point scared down there, and if so, how do you deal with fear?

Walsh: No, you're on your game, you're very alert. Being scared and having fear zaps your mental acuity and you can't afford to do that because you have to stay very sharp. All these practice dives we had been making in Guam were exactly the same, so by the time you reach the deepest dive... you become, I don't want to say 'one with your machine,' but close to it.

Clash: OK, I want to know about James Cameron's dive. Cameron [prepared for] this in pretty much secrecy to the general public, and so I think a lot people were surprised. Did you know it was going to happen?

Walsh: In 1993, James summoned me to Lightstorm Entertainment, his documentary film company in Malibu, Calif. I had worked with him before as a technical advisor on The Abyss, so we were acquainted when he was doing his documentaries on Titanic and Bismarck. He called me and he said, "I have an idea. I want to design a submersible for the deepest place in the ocean... do you want to go along?" And I thought to myself, "well, been there done that, bought the t-shirt," but I wanted to learn more about the project. So, I signed a non-disclosure agreement. After that, he told me absolutely zero for about a decade.
The cabin on the submersible is only four feet in diameter... and he took up yoga to figure out how he could focus on a really uncomfortable position with his knees up around his ears for so long. He worked it out so he could do it and control himself.

Among other technologies that have advanced is the science of communicating... He could rather efficiently tweet. So, here's James' wife sitting at our control center and when he hits the bottom, she tweets him, "Congratulations." And when he came back up, he quipped, "no matter where a guy goes in the world his wife can still get a hold of him."

Clash: The Russians went down in a submersible under the Arctic ice and claimed the North Pole. I know you were involved early on in the idea and planning. Can you talk a little bit about that?

Walsh: I have been going to the Polar Regions since the mid-50s (I have a mountain named after me in Antarctica).

I found out that no one had ever been to the real North Pole; they've walked on the frozen water, but never gone below the surface.

It took us about eight years [to set up a program]. That's how we started making dives to the Titanic, as a placeholder... until we got everything lined up to make the dive to the North Pole. It was never intended as a main course of business; it was just to keep everyone alive.

In 2009, it all aligned. We got the funding for the expedition, sold all 20 tickets, and got ship charters. The Russians [suddenly] said, "hands up, this will be an all-Russian expedition, one dive, and that's it." Our entire 10 years of planning... were hijacked. It became part Russia's official contribution to the international Polar Year and they basically took the program away from us.

Audience: Do we know if there is a point deeper than the one where you originally went?

Walsh: They did find a deeper place. After we had gone back home, the rest of the team put Landers [deep ocean vehicles] down there and got to over 36,000 feet, but it was not a manned vehicle. I'm sure Cameron will go back there.