There are three main hypotheses -- that is, educated guesses that can be tested through research and exploration:

Amelia Earhart and her navigator, Fred Noonan, disappeared over the Pacific in 1937. What happened to them?

2. They were captured by the Japanese military and died; or

3. They landed on Nikumaroro, an uninhabited coral atoll in what is now the Republic of Kiribati, survived for awhile but finally died.

For over 25 years, I've worked off and on as a volunteer archaeologist with The International Group for Historic Aircraft Recovery (TIGHAR), testing the Nikumaroro Hypothesis. My colleagues and I have made nine trips to "Niku," as we call it, to do surveys on land and in the water. We've inspected other nearby islands, and done historical work in Fiji, Funafuti, England, and other parts of the world. We've done research in oceanography, meteorology, radio science, chemistry, forensic anthropology, and other disciplines. We've studied everything from 1930s cosmetics to the behavior of coconut crabs. We think we have a pretty good idea what happened to Earhart and Noonan, though we don't know for sure.

Here's our evidence in a very small nutshell:

· Earhart and Noonan were headed for Howland Island, on the equator north of Niku. To judge from the strength of their radio signals, they got close. The last universally accepted radio message from them said they were flying on a course of 157-337 degrees. That course, plotted through the neighborhood of Howland Island, also passes close to Niku.

· After they disappeared, over 100 radio messages were received at stations around the Pacific that were logged as possible messages from her. When the U.S. Navy failed to find her, the messages were dismissed as hoaxes, but TIGHAR's research suggests that at least half of them weren't.

· About three months after they disappeared, a British team exploring Niku for possible settlement saw debris suggesting someone's "bivouac," but didn't make anything of it.

· In a photo one of the British team took of the island's northern reef, there's an odd image off in one corner, caught by accident. Forensic imaging experts say it looks like an airplane's landing gear.

· Deep on the reef face below where that possible landing gear was in 1937 (It's gone now), robotic imaging has revealed what may be airplane parts.

· A settlement was established on the island in 1939; it lasted till 1963. The settlers -- from Kiribati and Tuvalu -- found and used airplane parts; they have stories about this, and we've recovered fragments of aircraft aluminum in the ruins of their village.

· In 1940, they found human bones -- thirteen of them, near the south end of the island, associated with the remains of a man's shoe, a woman's shoe, a sextant box, and a few other artifacts. Sent to Fiji, the bones were identified by a medical doctor as those of a European or mixed-race man. The bones and artifacts have been lost, but we have the doctor's notes and measurements. Forensic anthropologists examined the data and concluded -- with caveats -- that the bones suggest a European woman of Earhart's stature. 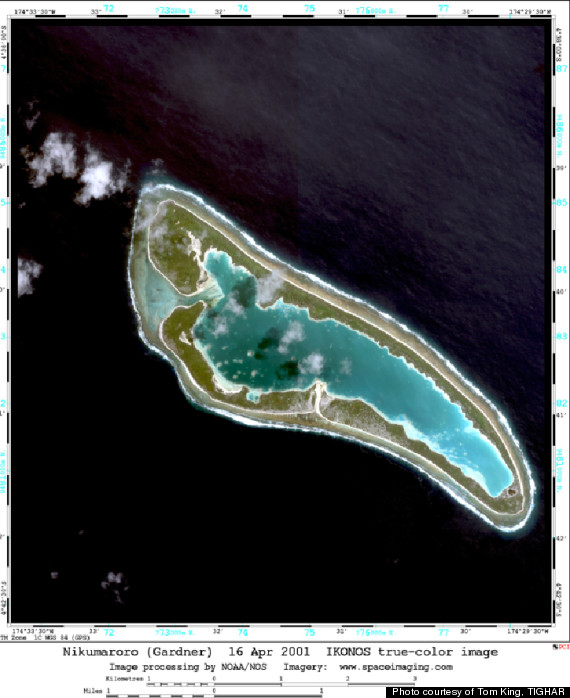 Satellite image of Nikumaroro, where Tom King of TIGHAR searched for the aircraft

· We're pretty sure we've located the site where the bones were found, and we've excavated part of it. We've found the remains of campfires with bird, fish, and turtle bones, clam shells, and some very interesting artifacts -- like:

o The remains of a woman's compact dating to the 1930s;

o A jar, also from the 1930s, that apparently contained a mercury-based cosmetic used to lighten freckles;

o Other cosmetic bottles from the 1930s; and

o Two bottles that were apparently left sitting upright in one of the fires, perhaps in an effort to boil water -- there is no fresh water on the island except what can be caught during rainsqualls.

Here's what we think happened:

· Unable to find Howland Island, Earhart and Noonan flew south along that 157-337 degree line, and found Niku. The tide at the time was a low "neap" tide -- the lowest point in a multi-day tidal cycle. So the broad shelf running out to the reef edge had little or no water on it. They landed safely.

· Over the next few days, they camped nearby and visited the plane when the tide was low enough and it wasn't unbearably hot, sending of radio signals whenever they could.

· Over the next several days the high tides got higher, and finally at the "flood" stage the plane floated over the edge of the reef, leaving one landing gear stuck in a hole.

· Earhart and/or Noonan (probably Earhart, we think) explored the island and wound up camping and living off the land at the south end. She (or he, or they) survived there for some days or even weeks, but eventually died, probably of thirst.

That's what we think happened, but we don't know it's what happened; it's our hypothesis, and we're planning more work - notably an exploration of the reef face with manned submersibles - to test it further.

But what about the other hypotheses?

The one that probably most people believe, because it's the simplest, is that Earhart and Noonan never found any island, crashed into the ocean, and sank. That may be what happened, but it doesn't account for the radio messages and the various things found on Niku.

The other popular hypothesis is that Earhart and Noonan flew into the Japanese occupied islands of Micronesia -- most likely the Marshall Islands -- and there were captured and either were executed or died of disease. Many, many stories have been told in support of this idea, by residents of Micronesia and by men and women of the U.S. military during and after World War II. But that's what they are -- stories, and while they might be true, they also might not be; no one has produced hard evidence. In recent years psychological research has demonstrated that even sincere eyewitness testimony by honest people can be seriously distorted by a variety of factors. Another problem is that the "Japanese capture" hypothesis requires that the U.S. and Japanese governments have hidden the truth all these years. Maybe that's what's happened, but it makes for an awfully complicated hypothesis.

We prefer a simpler one -- they couldn't find Howland, they did find Nikumaroro, they landed there, and they died. That's the one we'll keep investigating until we either prove it correct or decide that we're wrong.

For further information on the Nikumaroro hypothesis and TIGHAR's work, visit tighar.org, or see:

This post is part of a series produced by The Huffington Post to commemorate the 79th anniversary of Amelia Earhart's 1935 record-breaking solo flight, when she became the first person ever to fly from the mainland United States to Hawaii. To see all the posts in the series, click here.