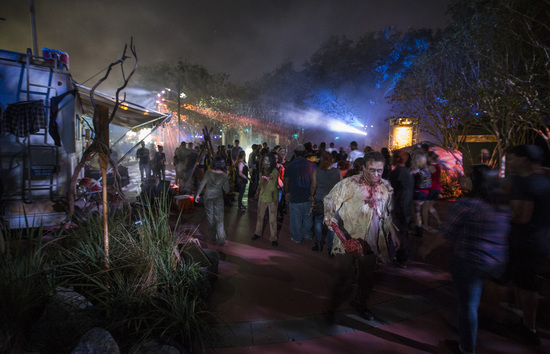 The Halloween screams don't end after Oct. 31 for the creatures, and creature creators, at Universal Studios Orlando's Halloween Horror Nights. While you may be removing gooey fake blood, latex or fangs after a long night of candy corn and cocktails, the scares continue at the 23-year-old event in Central Florida.

Running through Nov. 2, Orlando's Halloween Horror Nights (HHN) -- which has a counterpart at the Universal Hollywood in California -- has consistently ranked at the top of lists of best haunt. In fact, HauntWorld, a magazine for professional owners and operators of Halloween attractions, called it "simply the king of all Halloween theme parks."

And for a second year in a row, the "king" of haunts has partnered with the ruler of cable television, AMC's series The Walking Dead, to create a zombie-ridden experience. Although this year the scream team has expanded to include park-wide "scare zones" where so-called "Walkers" from the show will terrorize guests as they explore the movie-set streets -- and wander through scenes from the first three seasons of the mega-hit show. Also, "The Walking Dead: No Safe Haven" haunted house, or maze, allows those guests to visit the disturbingly accurate prison and town of Woodbury from the show.

In addition to haunted houses based on popular franchises like Walking Dead -- as well as An American Werewolf In London, Cabin In The Woods, Evil Dead and the Resident Evil video games -- the attraction also offers live shows based around Bill and Ted's Excellent Adventure and the Rocky Horror Picture Show.

Michael Aiello, creative director of Halloween Horror Nights, said the "nationwide notoriety" of HHN is partially due to never ending evolution, even after the event opens for the year. Located in soundstages and temporary, building-sized tents, Aiello said the haunted houses are designed to allow for "constant experimentation."

"It is a living beast," said Aiello.

Even from our employee preview the Wednesday before we open to the public that Friday, there are tons of things we're adjusting and modifying; every single facet of our maze is constantly in flux.

For instance, Aiello said an animatronic head with moving eyes from the Cabin In The Woods "zombie redneck family" added to a mass of body parts two weeks ago, as was a blast of water that emanated from a bone saw scene in the same house.

Aiello said this constant experimentation has been a mission of the event since he began 16 years ago as a "scareactor" who "jumped out of a washing machine 80 times an hour." But the technology has changed. Instead of an actor screaming themselves hoarse all night, they can cue up sound or light trigger as they jump out. And in the Werewolf house, intricately detailed puppets connected to a drive shaft and steering wheel allow a creature to leap, snarl and move around.

Additionally, Aiello's team can test new elements in a house that may be utilized more in future years. They recently tried out radio-frequency technology in the Evil Dead house so a performer could actually say the name of guests who had signed up for Universal's Legendary Truth interactive game experience. This could be rolled out even further down the road.

"The guests reacted negatively -- but very positively in our realm," he said. "They're cringing, they're running, they're screaming."

Moreover, next year's fears are already in the works. Halloween Horror Nights 2014 is three weeks in the planning phase, and construction on the mazes will actually begin in April, with each taking about four weeks to complete. Of course, working with intellectual properties requires much longer to pin down. Aiello said HHN has wanted to do an "American Werewolf" house for four years, but couldn't make it happen until now.

But when the event does develop a house based on a popular movie, show or video game -- which only began in 2007, said Aiello -- HHN works closely with the creators to authentically adapt a brand to a maze.

When Universal was first tackling The Walking Dead brand last year, Aiello said AMC and the show's executive producer and special effects supervisor Greg Nicotero were heavily engaged. This year, he said HHN had a "bible of sorts" with the brand that allowed them to expand the experience. But the network and Nicotero continue to green light the attraction's designs.

"All of the sculpts we do and molds we create are based on Nicotero's designs, from top to bottom," said Aiello, who commented that Nicotero would send him images to use for designs. For example, the effects master took about 90 photos of the character Michonne's zombie "pets" so they could recreate them for the park.

For his part, Nicotero said the task of creating zombies at the theme park is a "little more challenging" than it is on television. He added that Aiello's team has earned his respect because they have much more ground to cover than a show set does, and that the performers engage more closely with a guest than an audience member can with a Walker on-screen.

"All in all, we have 150 Walkers coming in and we'll do 20 "hero" makeups, 50 mid-ground makeups and in the deep background, we'll put masks on," said Nicotero.

That benefits the television show, from a filming standpoint, that people will never get close to the camera -- for the theme park, it's quite different because you can never tell which of the performers will get closer to guests... we can edit stuff out if there's a Walker that doesn't look quite right; it's a lot different having a live experience.


But Aiello said compliments like this, and from "hardcore fans" who notice the tiny details and "Easter Eggs" the designers hide in the mazes, makes it all worth it.

A big fan of An American Werewolf In London, Aiello recalled when he met with the film's director John Landis, who was skeptical that HHN could bring it to life.

"Our first creative session, he left going, 'I approve of what you're doing; I don't think you can do it, but I approve it,'" said Aiello. "Then he came opening night and went through the maze, put his hand on my shoulder and said, 'you did it.'"

Of course, Michael Aiello said the cringing, running and screaming from guests make his job pretty great as well. And with a couple more days left of Halloween Horror Nights, there are still many to be enjoyed before the event haunts 2014.