Located near Sawyer, Michigan, along the shore of Lake Michigan, this state park is home to three miles of shoreline, six miles of hiking trails, and some of the tallest sand dunes around southern Lake Michigan. The dunes range from bare to wooded, and when first seen from a distance, appear a bit smaller than they really are. 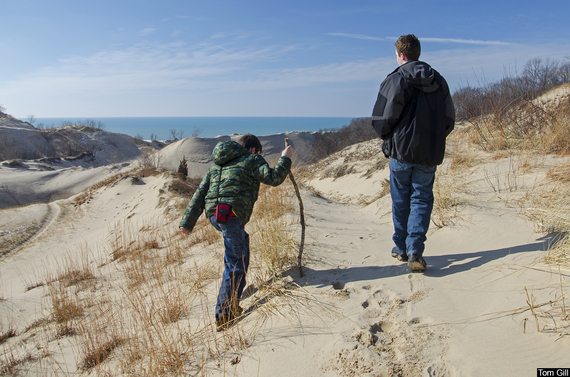 Exceeding a height of 250 feet, the ever-changing sand dunes of Michigan's Warren Dunes State Park provide a beautiful landscape for hiking and exploration. 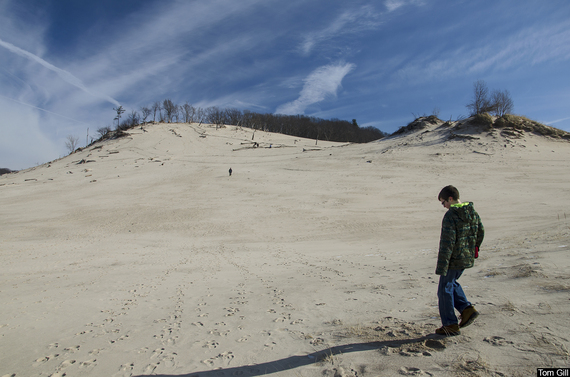 Our winter hike began from the beach, up to the tallest dune in the park, appropriately called Tower Hill. It's the most prominent dune viewed from the beach. 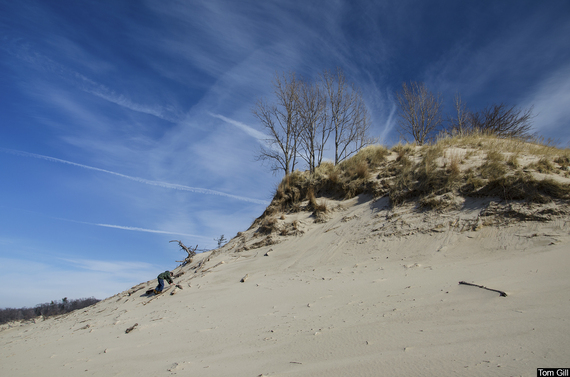 The distance between dune ridges is realized once a hike begins, and what seems to be a gradual incline becomes a challenge for hikers. Gravity and the wind work against each other to form the dunes, resulting in a slope of about 30 degrees. While this isn't too steep, the loose sand makes the climb up or down a dune quite a workout. 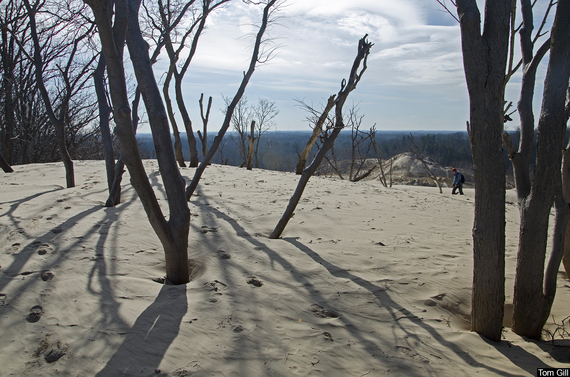 Once at the top, we encountered the "living" part of the dune--the portion that moves with the winds, which, in this case is slowly burying the nearby forest. Called "living dunes," these dunes move away from Lake Michigan as the sand from the windward side blows over them and falls on the leeward side, in essence causing the dune to move inland. In this process, everything in the wind's path is buried in sand. Dead standing trees on top of the dune and the partially buried forest below provide evidence of nature at work. 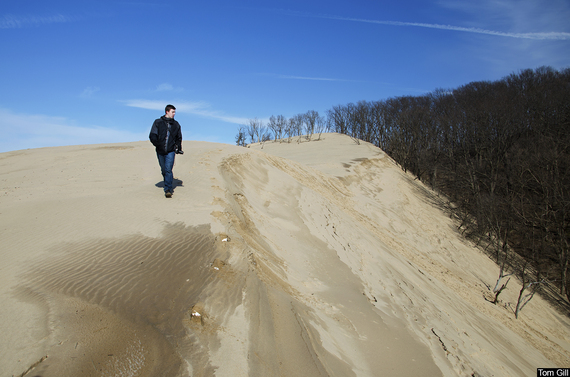 This dune has slowly consumed the forest adjacent to it. Soon, the trees will disappear in the deep sand. The buried trees may re-emerge in a few hundred years, after the dune passes by. Or, as happens in some cases, the inner portions of the trees might rot away, leaving only the hard outside portion. If this happens, the hollow, straw-like tree could create a void in the sand and, eventually, become the source of a dangerous sinkhole. One such sinkhole at the nearby Indiana Dunes National Lakeshore swallowed a young boy in 2013. It took teams of workers with heavy equipment hours to extract him. The boy survived the ordeal, but the dune remains off limits to visitors.

Once atop Tower Hill, we hiked over to an adjacent wooded dune, and then followed the trail for a bit until it led to an opening that provided a breathtaking view of the dune valley below. From this elevation, the interesting, overlapping patterns of various dunes were evident. 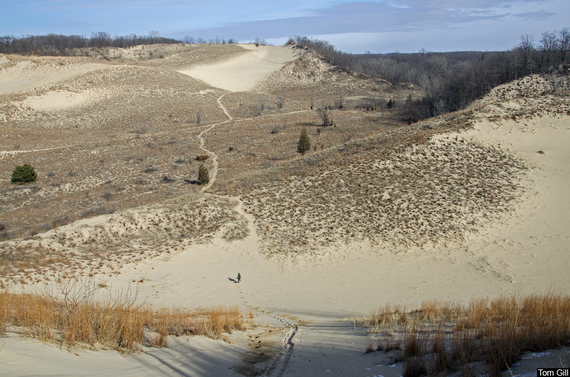 We decided to cross the valley and climb the far dune, and were surprised by the actual distance once we began walking. Climbing this dune yielded another spectacular view of Lake Michigan on one side, and the Michigan countryside on the other. 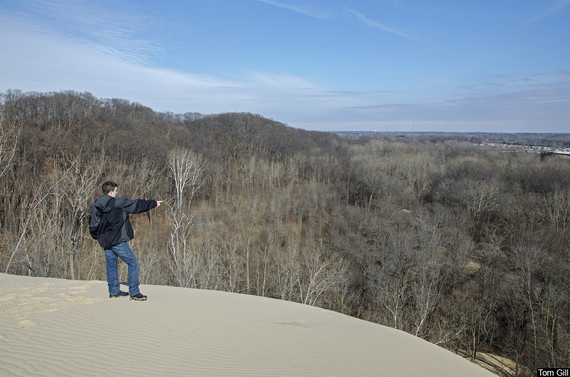 Yet another trail led to the forest at the foot of the far dune. Here, hikers descended the dune along this loose sand trail. It's more challenging than the observer might imagine, but a lot of fun. 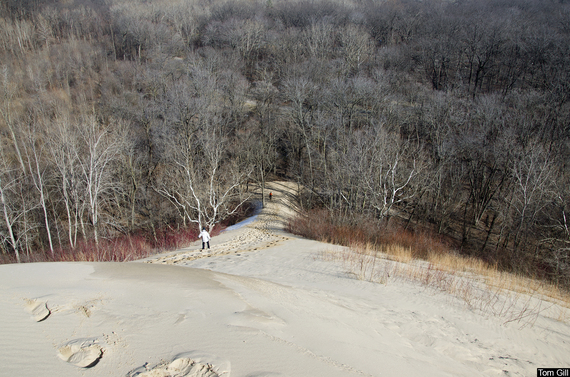 After taking in the view, our hike resumed along the narrow dune ridges that pointed to Lake Michigan. Here, hikers are immersed in the rolling landscape. They can experience dunes of varying sizes and shapes, along with some interesting "living dunes" close by. 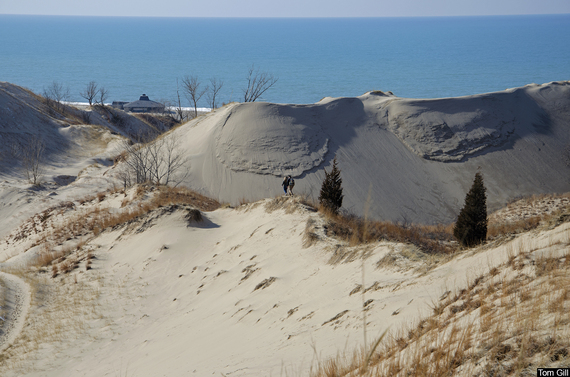 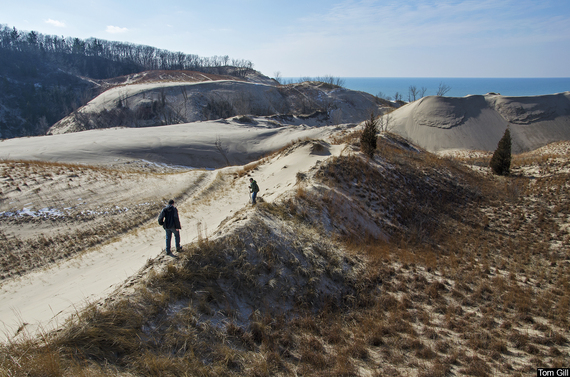 Walking along the ridge created some distorted shadows of this hiker. The shadow fell down the slope of the dune, elongating it. There are an endless number of interesting things to see on hikes such as this. 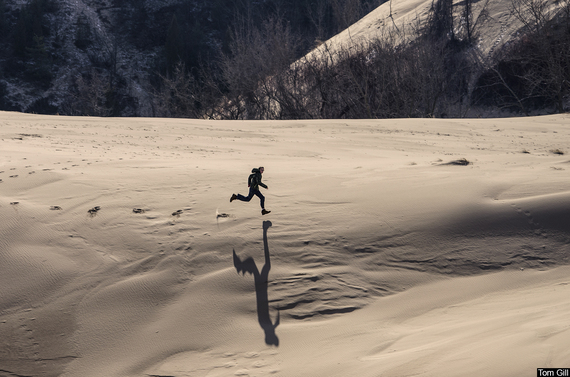 Walking closer to the beach, we noticed that the living dunes showed evidence of their movement toward the top, due to the cold temperatures earlier. The moistened sand froze into formations resembling a landslide. 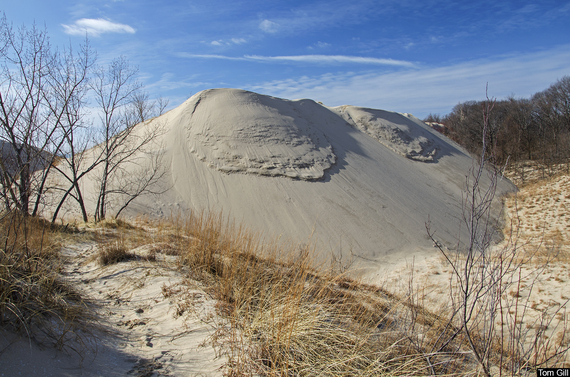 There are many more areas of the Warren Dunes to explore, and every season brings a distinctive appearance to the landscape. Take advantage of a brisk winter afternoon, or any of the upcoming seasons, to explore them yourself.