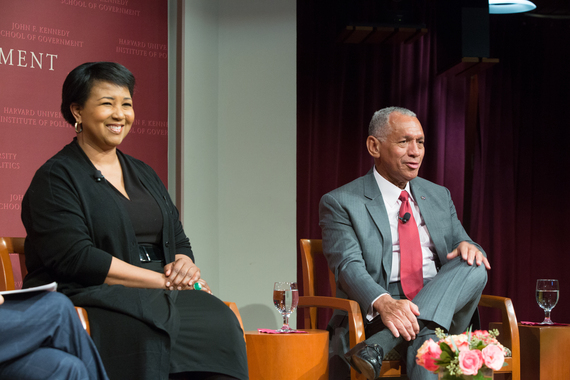 In 1969, Neil Armstrong and Buzz Aldrin planted the American flag on the moon. Ever since then, space exploration has inspired generations of Americans; General Charles Bolden, surprisingly, was not one of them.

I was over the moon (pun intended) to sit down with General Bolden before the JFK Jr. Forum's "Exploring Space and Interstellar Travel" forum, and find out what inspired the current NASA Administrator and one of the most well-respected astronauts of this generation, to pursue a career in space exploration. He told me that, "In spite of not thinking about becoming an astronaut, two things [he] was always interested in, just naturally and inquisitively, were math and science." These traditional subjects however, now need to make room for NASA's new and increasing focus on an interdisciplinary direction -- what Bolden dubs as "new space". Between "the support of our international partners" and "entrepreneurs, American industry, and academia", a modern type of collaboration has arisen, giving America "an opportunity to try to galvanize and pull together all kinds of disparate people". People, who's lives on Earth are already being impacted on a daily basis by advancements in technology courtesy of NASA.

“What do you see as the future of space?”“President Obama set out a grand challenge for NASA back in 2010. He wanted...

As humans push deeper into space, NASA has become the crucible in which traditional sciences, private sectors, politics, and public support have joined forces to exhibit the best of human achievement. Each mission that is embarked on, pushes the boundaries of our knowledge, our technical know-how, and the determination of countless men and women to explore beyond the world we see today. Having interned at NASA's Goddard Space Flight Center, I was lucky to be a part of a team in which there was a genuine spirit of adventure and purpose towards making the year 1969 only the beginning of space discovery. This same spirit that got us to the moon, might by the 2030s, land humans on another planet.

Bolden, appointed by President Obama in 2009, describes NASA's current initiative of "embarking on a journey to Mars" as "exciting and challenging," because outer space is unpredictable to say the least. Bolden emphasized that "exploration means, by definition, that we don't have a clue" of what we might find, and that is precisely "why we go." The greatest discoveries in history were made by the bold and fearless, like General Bolden and fellow panelist, Dr. Mae Jemison. A former astronaut and Principal of The 100 Year Starship Project, Dr. Jemison, pushed the dynamic conversation even further. Interstellar travel, she argued, is, in actually, a not-so-far-off possibility. With conviction, commitment, and great public will, Dr. Jemison and General Bolden both agree that there are no limits -- space and what there is to learn from it, is indefinite.

The night was dotted with light-hearted references to Star Trek, Star Wars, and even the most recent space-related blockbuster film, The Martian. Yet every day, right under our noses, NASA is already "turning science fiction into science fact."