My sweaty hands flicked through the rail of vintage clothing that was too small for me anyway, and I thought I would get done for loitering. My eyes were fixed on the open door in the back of the small second-hand store on Agmashenebeli Avenue, plotting for someway to sneak into the interior of one of Tbilisi's key art nouveau buildings.

With the shop assistant's back turned, I slipped into the cool corridor. I motioned forward, conscious of my heels tapping on the tile flooring as I looked up at the frescoes on the wall, depicting scenes from "The Knight in the Panther Skin" by Shota Rustaveli, a classic poem in Georgian literature. The crack in the paint traced a road up to the flaking ceiling in desperate need for restoration, while the wrought-iron staircase of flowers set against the painted backdrop referred to the building's original beauty that showed through the decay.

Number 36 on Agmashanebeli Avenue echoes back to Georgia's art nouveau golden age. Even with its faded exterior colored gray by a century of car fumes and dust, the curves of its gilded iron balconies, plaster detail and accented windows still recall Tbilisi's modernist grandeur, but it is also a poster child of its much needed attention.

There is very little academic knowledge available on Georgian art nouveau, mostly due to its rejection during the Soviet era, when the once popular style became demoted to the category of "unimportant art". While art nouveau in Georgia is slowly gaining academic recognition, there is also the danger that many of these key examples of Georgian modernism are on the verge of becoming extinct.

How art nouveau style came to Georgia is still uncertain, some say that the modernist movements from France and Germany penetrated Russia, and the "stil modern" style eventually trickled down through to the Caucasus. Others cite Georgia's location on the Black Sea as the direct point of entry for the art form from Europe. Even though art nouveau was imported, the Georgians transformed it into an art movement they could call their own. 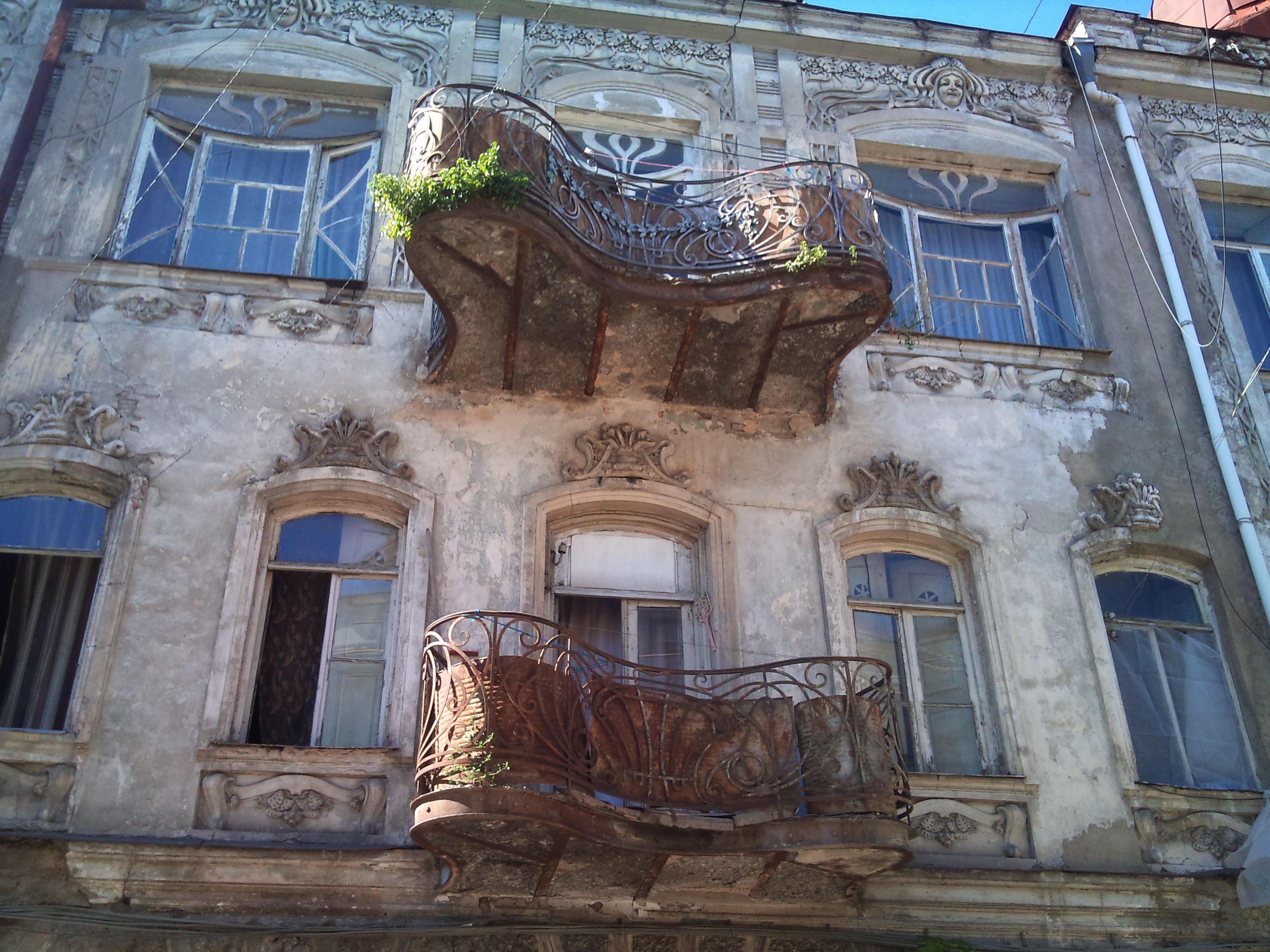 Art nouveau arrived fashionably late in Tbilisi, when early examples popped up around the city circa 1902. The residential house on the former Vartsikhe Street, now renamed Rome Street located just behind 36 Agmashenebeli Avenue, is the oldest example to date. The Georgian architect Simon Kldiashvili, who best represented the architectural side of the Georgian art nouveau movement, made his mark on this façade characterized by undulating iron balconies.

Tucked in a side-street off Agmashanebeli Avenue, the multicolored tiles, broken off in places, crown the top of 3b Ia Karagereteli Street (1903). The walls are stripped bare, down to the naked brickwork, covered only in patches of paint and plasterwork, becoming another monument left to the ravages of time and bad maintenance. 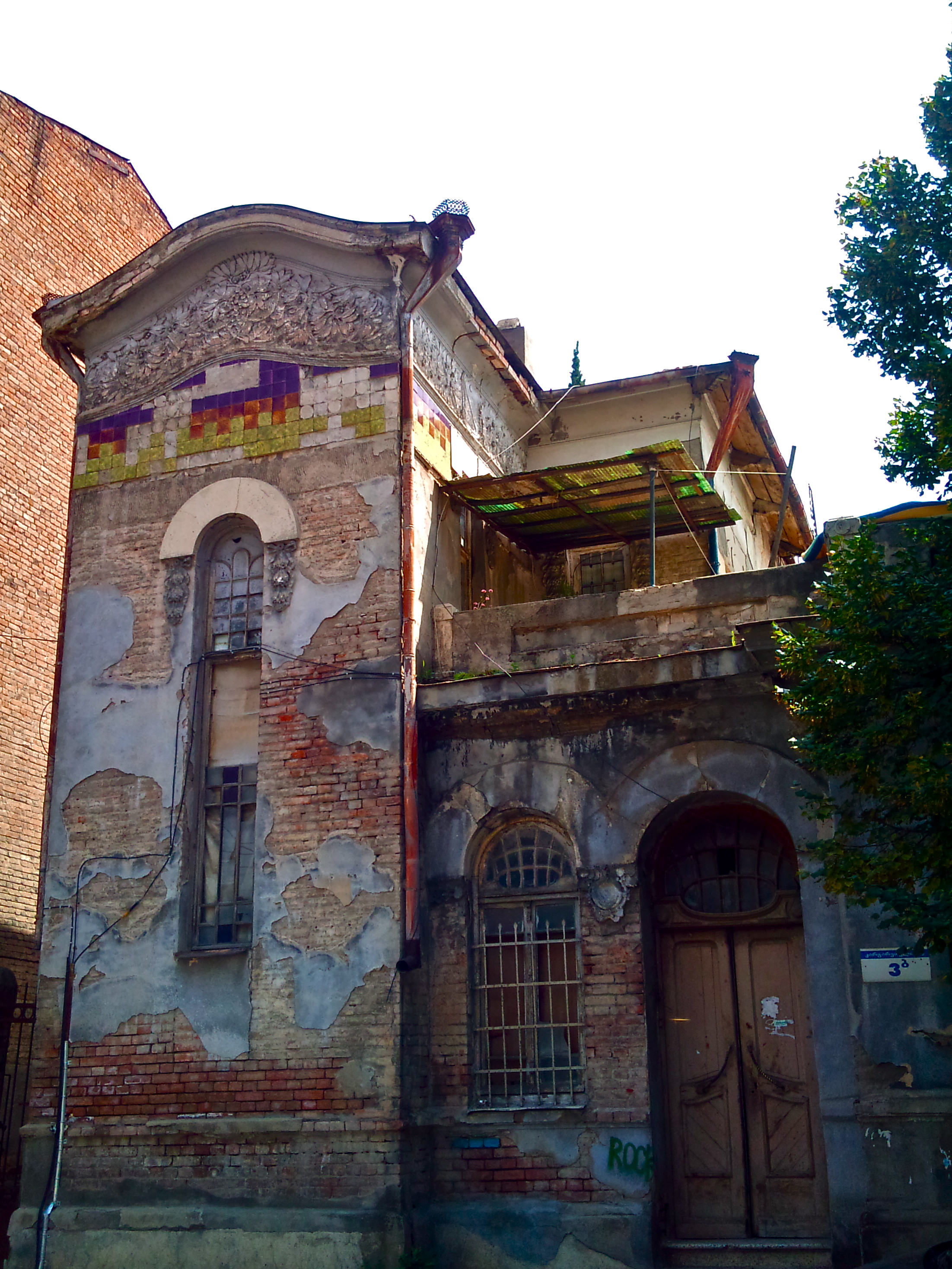 The air of fading grandeur lingers among the flaking buildings, where modernism and neo-classical design live side by side. Going inside these semi-abandoned houses, even if they are not classically art nouveau themselves, there are continuous reminders of the "stil modern", from the iron railed stairways to the details in the tiles.

The Apollo Cinema, dating back to 1909, was once a thriving movie theater, where the introduction of art nouveau along with the art of film arrived simultaneously in Georgia. However, the Apollo cinema has become a tragic testimony to the neglect and risk hanging over the art nouveau heritage of the Georgian capital. The building was listed among Tbilisi's most endangered monuments, and until recently it was on the verge of condemnation. While its restoration may have saved the building from being torn down, the Apollo has undergone poor renovations, which resulted in the loss of its original features.

The art nouveau that was once immensely popular throughout Georgia has been forgotten, neglected and the conservation of Tbilisi's art nouveau heritage has become a serious problem. Ever since the Soviet Regime, which considered the style bourgeois, art nouveau was condemned as "a crime of ornamentation." For this reason "stil modern" was never considered an important part of Georgia's heritage, letting damp, poor maintenance and age erode these buildings until they fall into disrepair, ruin and are eventually pulled down or become subject to poor renovation work, where frescoes are erased by paint and ornamental plaster details are lost. 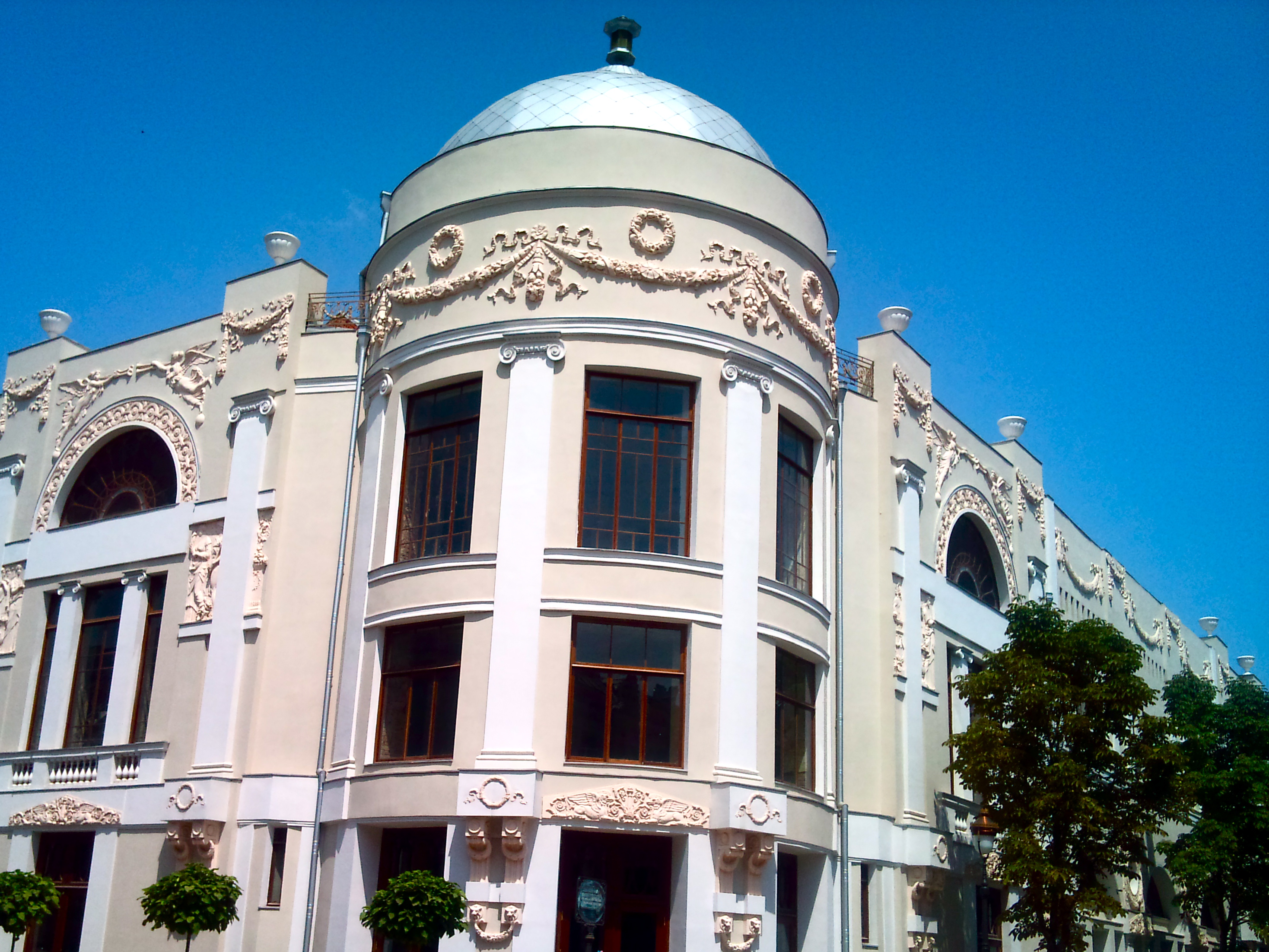 The need to put Tbilisi's art nouveau on the map has been noted in recent years. The Art Nouveau Preservation group aims not only to draw attention to these monuments, but also seeks to raise awareness for the need of their conservation. The group hopes to encourage more academic study into its history, since it's become a black spot on the architectural map of the Former Soviet Republic of Georgia.

In 2002, the World Monuments Fund included Georgian art nouveau in its list of most important and endangered monuments, and as of 2006, Tbilisi's art nouveau has been registered in the Brussels "Reseau, Art Nouveau Network. It also became a member of the Barcelona "Art Nouveau European Route."

Tbilisi may be one of the great art nouveau cities of Europe, but it's one that hasn't received the recognition it deserves - and perhaps by the time it does, it'll be too late.

A Tour Round Tbilisi's Art Nouveau

I would like to give special thanks to Maia Mania for her knowledge and help in my research on Georgian art nouveau.