History is rife with examples of human violence and immorality, from genocide and ethnic cleansing to corporate and governmental corruption. The people who are a part of these crimes are difficult to understand -- they seem far removed from us; their motivation and their culture seem alien. What can push people towards committing atrocities and moral violations that are so extreme they seem incomprehensible to most?

In her 1963 book Eichmann in Jerusalem, Hannah Arendt reports on the trial of Adolf Eichmann, a German SS official who managed the logistics of the deportation of Jews to ghettos and concentration camps during World War II. Arendt's portrayal of Eichmann is surprising -- rather than an evil monster, she describes him as "terribly and terrifyingly normal". Arendt's observation of the "coexistence of normality and bottomless cruelty" in Eichmann led her to coin the term "banality of evil". Under this lens, evil was not something incomprehensible and different but something almost ordinary.

Parallels with Arendt's Eichmann can be found in Joshua Oppenheimer's documentary The Act of Killing, which has Indonesian death squad killers re-enact their crimes in various Hollywood tropes and discuss the days of the genocide. Watching these killers dress in elaborate costumes, reminisce over their former glory, and quibble like children over small details of their fantasy re-enactments, Arendt's words on Eichmann come to mind: "everybody could see that this man was not a "monster", but it was difficult indeed not to suspect that he was a clown". But one striking question remains: if these men are not monsters, what compelled them towards such atrocious crimes? 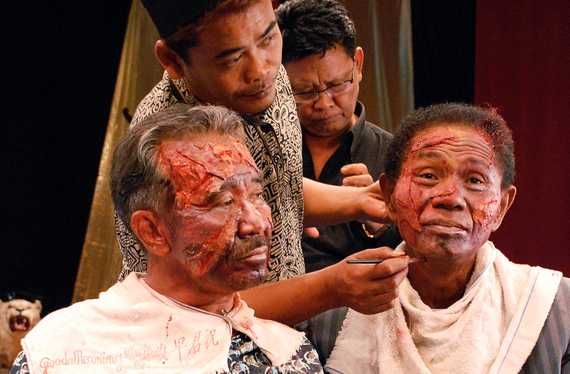 It is evident that authority and ideology play a role in the normalization of acts we would normally consider evil and morally reprehensible. The infamous Milgram experiment, where participants readily obeyed authority figures even when these figures instructed them to perform acts conflicting with their moral codes, illustrated the power of authority and provided a damning refutation of the bad apple theory, the comforting and commonly accepted notion that those who commit atrocities like murder and genocide, or those who are corrupt, are fundamentally different from the rest of us. Although the Milgram experiment has become widely discussed, we often experience a sort of cognitive dissonance when thinking about it: we tend to accept the findings of the experiment while believing we ourselves would have acted differently. Rather than ignoring this dissonance, the Milgram experiment should make us doubt our own invulnerability to the influences of authority and expectation.

From regimes like Nazi Germany and Indonesia's transition to the "New Order", we can see that group identity is another important factor. Philip Zimbardo's Stanford Prison Experiment is one particularly salient example of the arbitrariness and power of group identity. In a simulation of a prison environment, participants were arbitrarily assigned the role of prisoners or guards. Guards adopted authoritarian measures (to the extent that the experiment was abruptly ended early), while many prisoners submitted to the harsh treatment. While this study is often presented as evidence for the baseness of human nature, it would be more accurate to say that it demonstrates how group identity and environmental factors can affect behaviour.

Social psychologists explore the ease with which we adopt group identities with the "minimal group paradigm" -- group identities are surprisingly easy to establish, and we are willing to privilege ingroup members and treat outgroup members poorly even when group identities are largely arbitrary. The "othering" and dehumanization of the outgroup may be essential for the perpetuation of violence and discrimination. We may adopt different moral codes depending on the group we are identifying with - for example, those who become engulfed in corporate corruption often become gradually normalized to the moral code of the organization, even if they retain their own moral code outside of it. Similarly, Nazi officers may be perfectly kind people amongst their family members or social circles, where their dominant identity is not that of a Nazi but of a father or friend, and the moral code that goes along with the Nazi identity is less salient. In other cases, retaining a private sphere where one can break out of the ideological environment may be difficult or even impossible - take East Germany's Stasi, who created an Orwellian surveillance state where citizens were constantly in fear of being observed.

Is the takeaway that we are all dangerously close to moral depravity? Maybe not, but it is important to realize that we are more susceptible to ideology and authority than we are conscious of. It is important to realize that these large-scale atrocities occur not solely because of people who are inherently evil and morally corrupt, but that they perpetuate and grow because ordinary people become swept up in a particular ideology and moral environment. In Eichmann in Jerusalem, Arendt concludes that "the sad truth is that most evil is done by people who never make up their minds to be good or evil" - this lack of thought, this refusal to acknowledge the dissonance between the moral ideology of the time and our own moral codes, is fatal. The Act of Killing closes with a scene of one death squad killer retching at the site of many of the murders he committed, after playing the victim in one fictional re-enactment of their crimes - a particularly chilling reminder that ordinary people, not monsters, lie behind even the greatest atrocities in history.