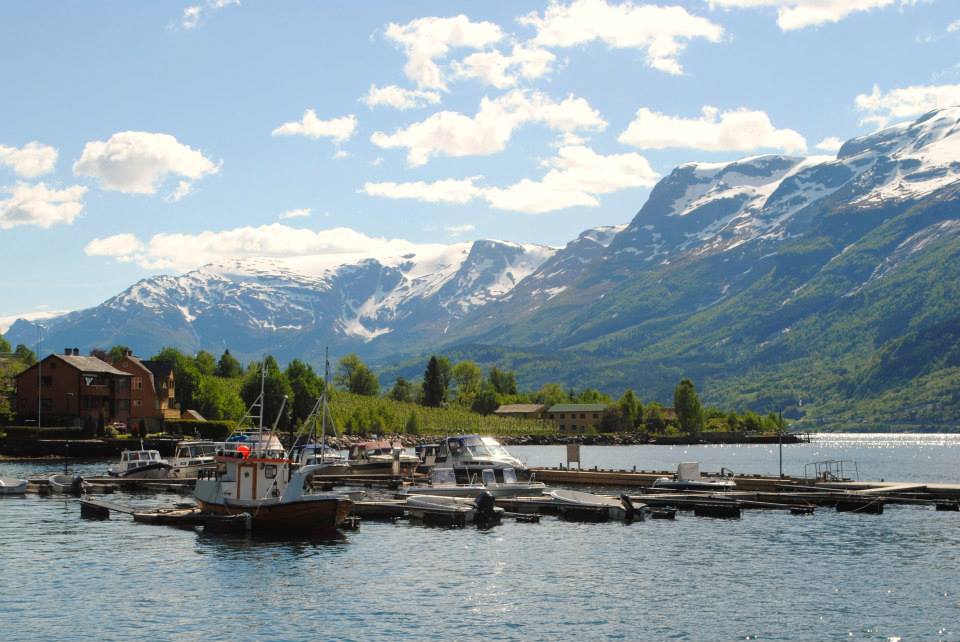 To visit the Norwegian fjords, long arms of the sea formed by glacial erosion, begin in Bergen, a cheerful port city surrounded by seven mountains. The city's historic center wraps around a bay crowded with sailboats. Old wooden houses in reds and yellows line the water. At the market, local fishermen offer a smorgasbord of smoked salmon, herring, spiced whale meat, moose and reindeer sausage, and the city's best fast food: salmon curry. Steep cobblestone streets are lined with bars, cafes and souvenir shops selling antlers and thick Norwegian sweaters. And just a couple blocks from the waterfront is a funicular railway that will take you up Mount Fløyen to a lookout point where you can see the entirety of the city and its surroundings.

From Bergen, many travelers take a cruise through the fjords. An option which provides more variation is the Norway in a Nutshell tour, which takes you through the region by train, bus and ferry.

The first leg of the trip is a train ride to Myrdal, where you board the legendary Flam railway train, one of the world's steepest railway tracks. The train rides along the edge of cliffs, overlooking rivers that run through the fjords, and tunnels in and out of mountains. The railway is used more by tourists than by locals, and so it stops at Kjosfossen, a roaring waterfall, where a woman known as a Huldra, the Scandinavian version of a siren, emerges from atop an adjacent cliff to sing and dance for onlookers. Flailing about in a medieval red gown with wavy blond hair down to her waist, she is quite a spectacle.

Flam
The train lets you off in the small village of Flam, built on a flat plain surrounded by lush farmland and rugged mountains. One of the village's hotels, the Flamsbrygga, has a Viking-style microbrewery where you can sample several award-winning beers and aquavit, which are distilled locally.

A short walk down the quai is Fjord Safari, which takes you on a two-hour ride through the Aurlandsfjord and Nærøyfjord on a motorized rubber boat, getting so close to a waterfall at one point that you're showered with mist. Villages dot the waterside, with rustic houses embowered in trees. If you're lucky, you'll spot porpoises and seals in the water.

Head south to Hardangerfjord, described in 1939 as "perhaps the most magnificent in a land where superlatives are soon exhausted," a statement which holds true today.

One of the largest fjords in the world, Hardangerfjord offers ample opportunities for outdoor adventures like sea kayaking and canoeing. The surrounding mountains provide hikes of various difficulty levels. One short hike takes you from the center of Eidfjord to the Hæreid Plateau, where more than 350 burial mounds, dating from 400-1000 A.D., lie among birch trees. For a more challenging route, climb up a steep mountainside to the Kjeåsen mountain farm, located high above the Simadalsfjord.

A short bus ride from Eidfjord is the Vøringfossen, a spectacular waterfall that tumbles in white torrents down 182 meters into the canyon below.

A walk along an ancient footpath near Eidfjord leads to a zipline that extends over class five rapids. After you're harnessed into the zipline, you leap off the edge of a cliff and slide to the middle of the river, where you are suspended just above the water, next to a thunderous waterfall.

Exploring the Fjords of Norway

Practical Information:
The best time to visit the fjord region is from May to September, with the warmest months being July and August. In the summer, the daylight does not fade until after midnight.

It rains so often in this area that the Norwegians have a saying: "There is no such thing as bad weather, only bad clothing." So pack accordingly - a raincoat is a must.