Some book collectors do not care very much about where they store their books. The English King Henry VIII, had a fine collection of books, but when visitors came to view them they were horrified by the conditions they were stored in, commenting on how they were stacked randomly on the floor and in untidy heaps covering every available surface. Thankfully, since Roman times, if not before, others have cherished books and wished to show them off to their best advantage.

Incredibly, until now, there has been no single volume tracing the history of library buildings through the ages. For the last three years, I have been traveling the world together with Will Pryce the architectural photographer, visiting and photographing 85 of the world's greatest libraries in 21 countries. The result is The Library: A World History (Chicago University Press), the most complete account of library buildings to date.

It is impossible to show all the magnificent libraries we have seen on our travels, but here are some of our favorite images from the book (all photos taken by Will Pryce). 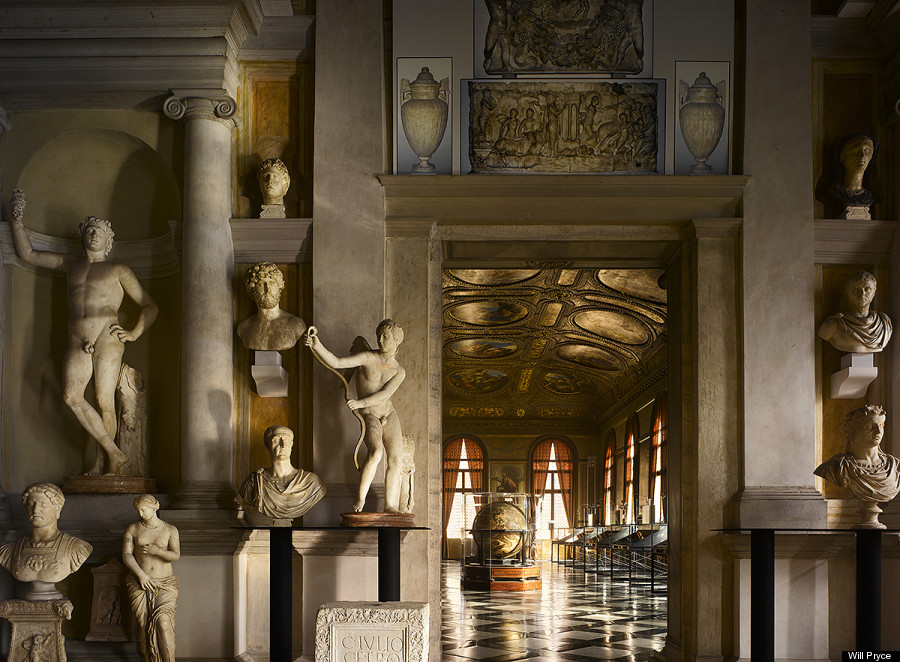 The Biblioteca Marciana in Venice, Italy
The first-floor entrance lobby to the Biblioteca Marciana (completed in 1564) in Venice is reached by a dramatic and richly decorated staircase from an outside doorway in the center of the grand facade facing the Doge's Palace. Since 1596 the vestibule has housed the Grimani Collection of sculpture. Beyond is the reading room, one of the finest rooms in Venice. The ceiling roundels were painted by the leading artists of the day. It was originally furnished with 38 long wooden lecterns, 16 down each side of the room, arranged like desks in a school classroom. They displayed the priceless volumes left to Venice by Cardinal Bessarion in 1472, each volume secured to the desk by a long iron chain. 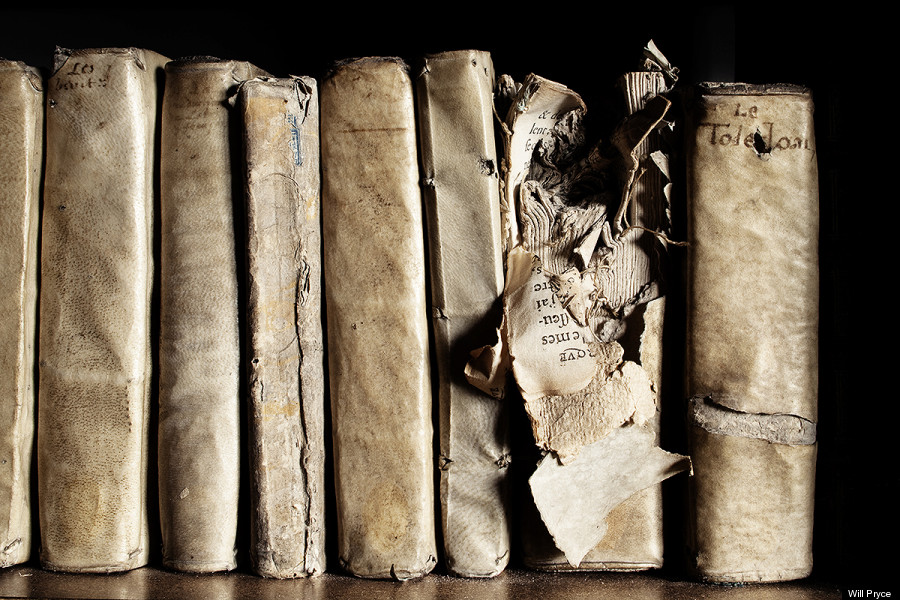 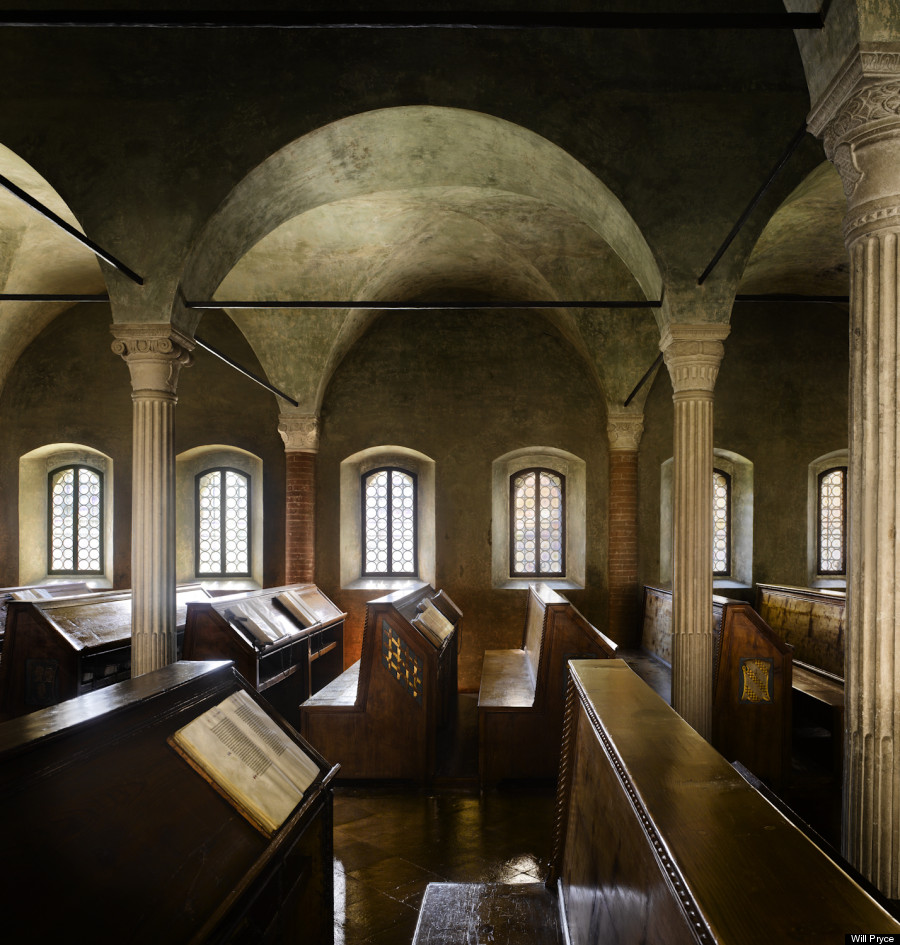 The Biblioteca Malatestiana in Cesena, Italy
The Biblioteca Malatestiana in Cesena, near Rimini in Northern Italy is without doubt the best-preserved example of what a late Medieval library looked like. Constructed in 1452 for Malatesta Novello, it was designed by the otherwise unknown architect Matteo Nutti. It still contains the books that Malatesta commissioned to be painstakingly copied out by hand. Each has been preserved in its original position, chained to the desks to prevent theft. In libraries such as this one, the readers went to the desk where the book was situated rather than requesting for the books to be brought to them. The brick vaults, covered in green painted plaster, were designed to resist fire. 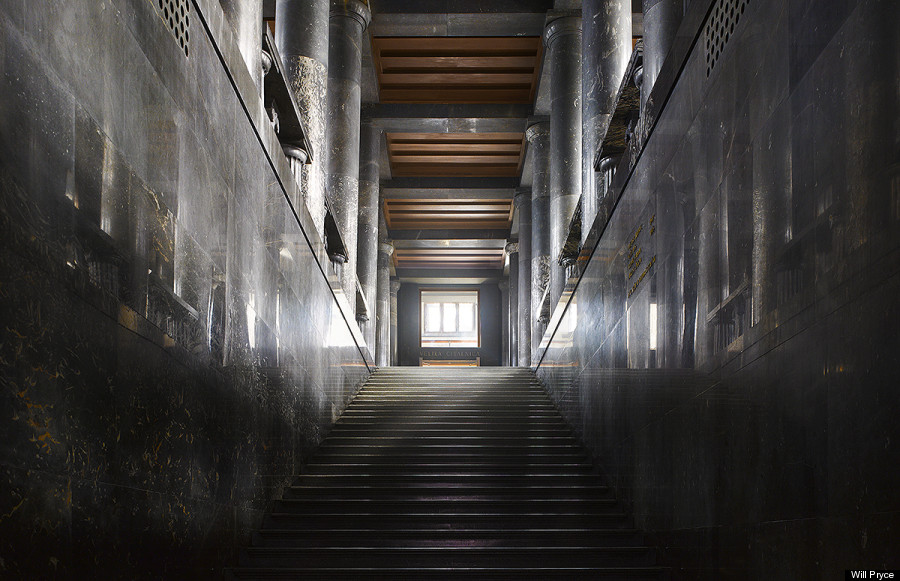 The National Library of Slovenia
Once ascended, never forgotten; this dark forbidding staircase ascends from the entrance vestibule to the brightly lit library above. This is a common theme in library design, but rarely done with such flair as here in the National Library of Slovenia, Ljubljana designed by Joze Plecnik and completed in 1941. A German plane crashed into the library reading room in 1944, closing it until in 1947. It has been open ever since. Plecnik was an eccentric designer and the library is one of his finest creations. 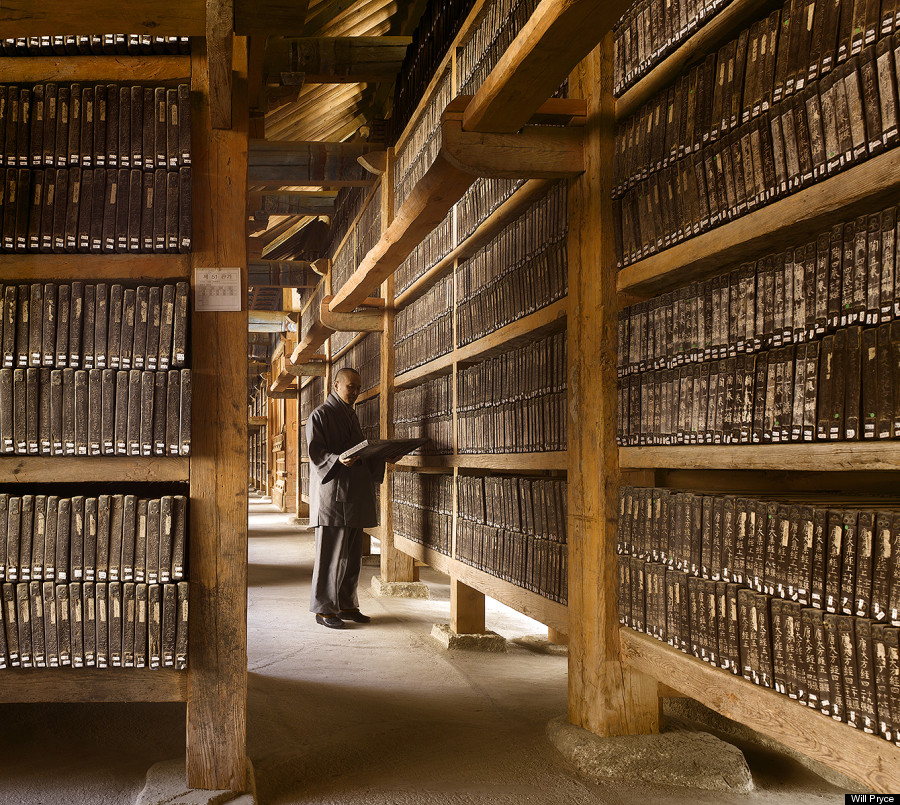 The Tripitaka Koreana, Haeinsa Temple, South Korea
The Tripitaka Koreana, Haeinsa Temple, South Korea, 1231. This is one of the oldest and most remarkable collections in the world. The items on the shelves are not books, but wooden printing blocks. There are over 80 000 of them. This building is not open to the public, although you can visit the temple and stare through the windows. It is one of the most remarkable places we were given access to. The blocks have been preserved by the clever design and layout of the buildings that house them, which ensure shelter and adequate ventilation. Set high in the mountains, cool winds have helped to keep the blocks in perfect condition for over 800 years. 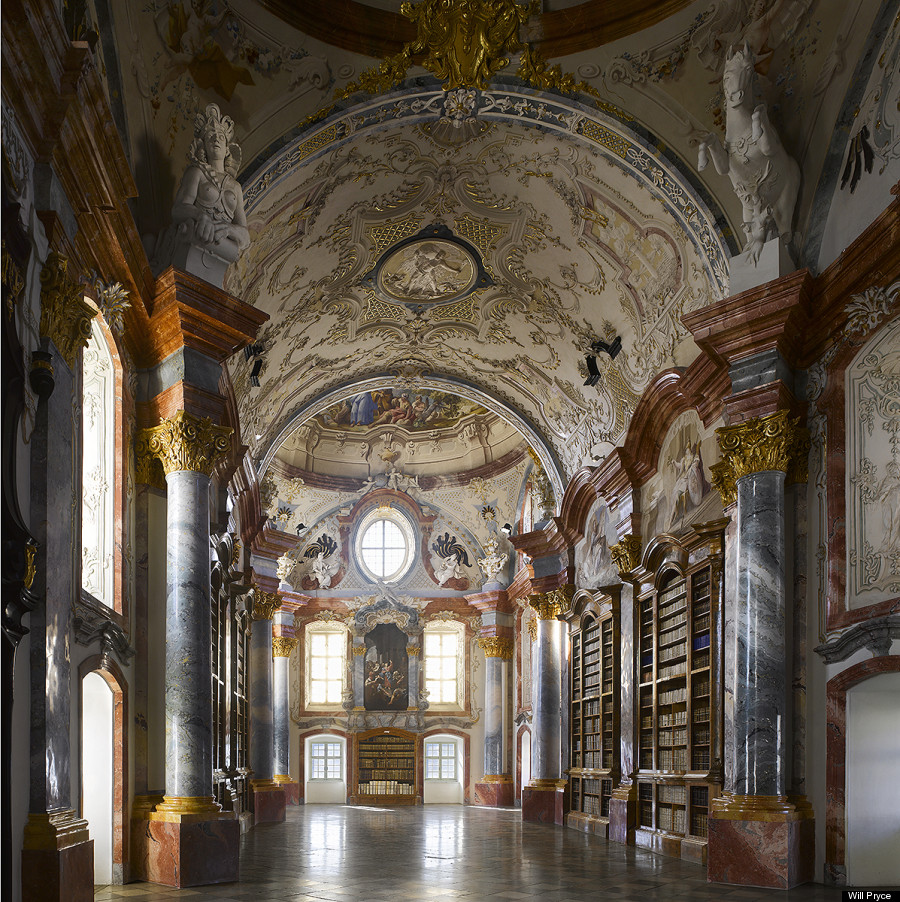 Altenburg Abbey in Austria
The eighteenth century saw the construction of some of the most lavish libraries ever constructed. Altenburg Abbey in Austria was constructed in 1742. Its grand hall is especially designed to exaggerate the size of the relatively modest collection of books the abbey had at the time. Underneath the library, a huge crypt was designed as mortuary chapel for the abbots. Thus the dead were remembered below, with the library housing the thoughts of the dead above. However it is difficult to think such grim thoughts in such a room so obviously designed to entertain the eye and lift the heart. 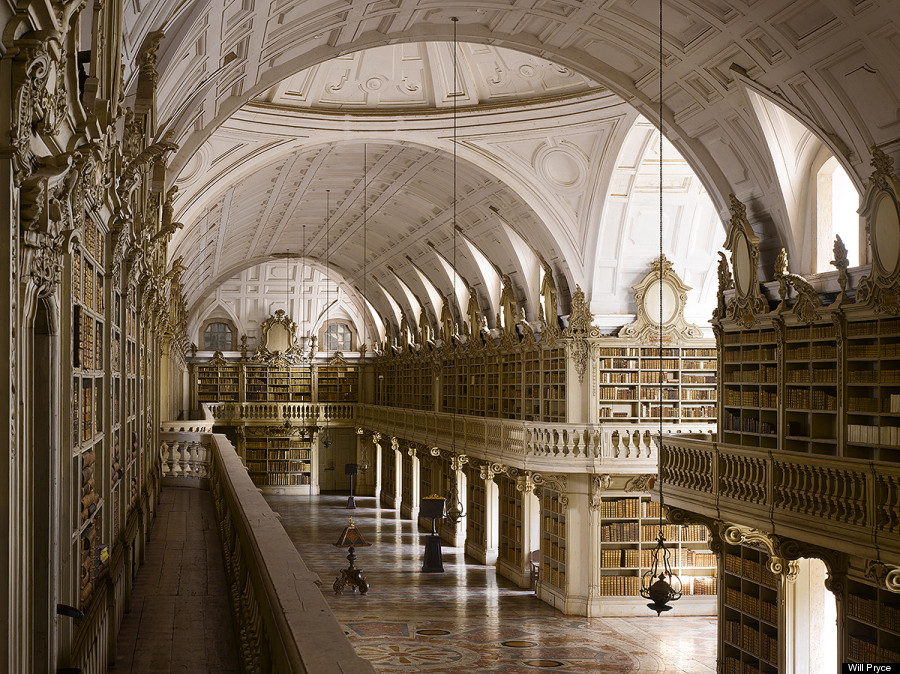 Mafra, Portugal
Mafra, in Portugal is 88m (288ft) long, making it the longest monastic library in the world, narrowly beating Admont to the title. Housed in a monastery within a royal palace, the library was originally intended to be gilded and to have an ornate painted ceiling, in keeping with other libraries of the period, but its long and protracted construction period meant that both the style of architecture and the purpose of the library changed during construction. This is one of two libraries in Portugal that house colonies of bats which live behind the bookcases and feed on the insects which might otherwise eat the books. 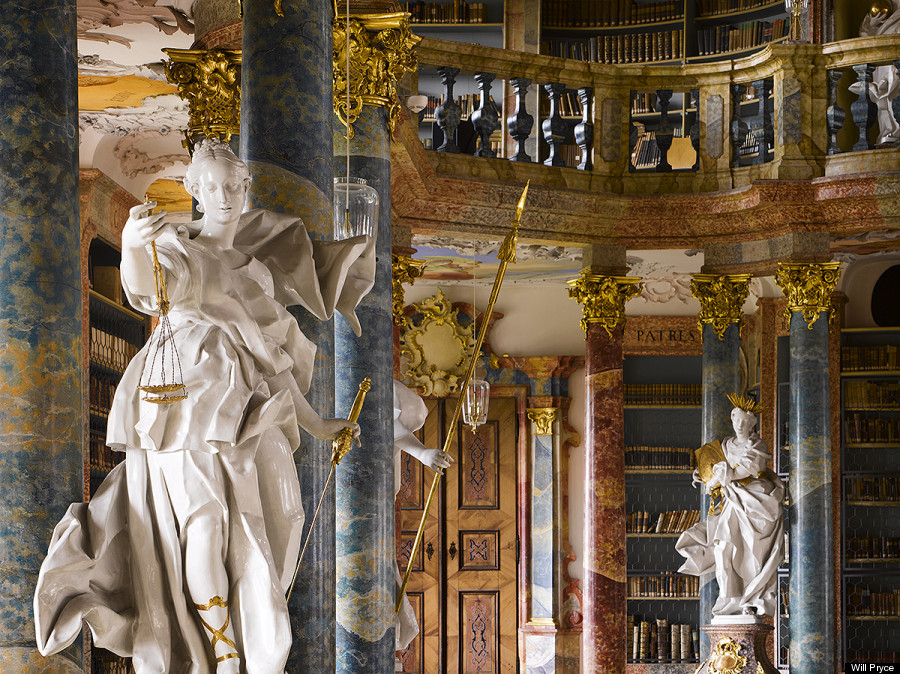 Wiblingen Abbey's library, Germany
The Rococo produced some of the most sumptuous library interiors in history. The library of Wiblingen Abbey (1744) in Southern Germany is a riot of colors, rich golds, light pinks and blues, every surface positively dripping in decoration. Perhaps not to everyone's taste, these wonderful library interiors nonetheless take one's breath away. But all is not what it seems: the marble columns and statues are painted wood. This is a magnificent stage set for displaying books. The library also contains perhaps the most elaborate of all library secret doors: The whole niche that holds the statue on the gallery hinges with the statue inside to allow you to get to the stairs. 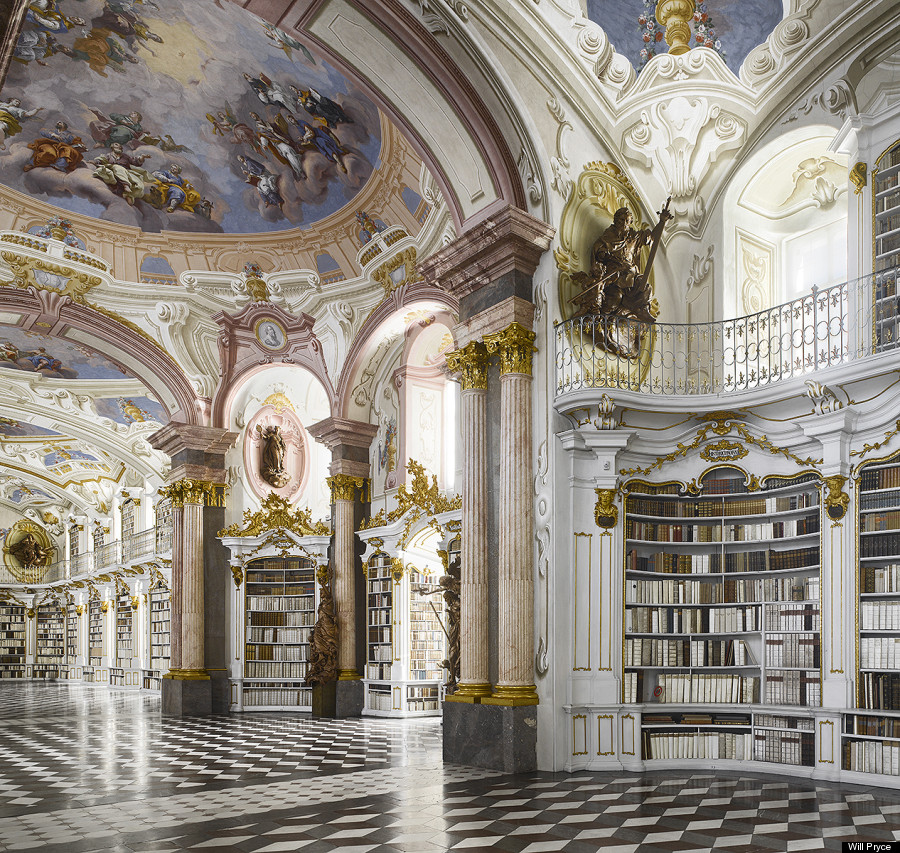 Admont Library, Austria
Of all the great monastery libraries of the eighteenth century, Admont, in the foothills of the Alps, is perhaps the most awe-inspiring. The corridors and staircases that lead to this room are relatively plain and nothing prepares the visitor for the space that is revealed when the doors are opened. At 236 feet long and 43 feet wide, the library is one of the longest monastic libraries ever built. Even the portable library steps are Rococo in design. Originally the collection was rebound in white leather to match the walls. There are no desks to work at because these library rooms were never intended for study. The books were taken back to the monks' warm cells to be read. This room was always just for housing and showing off the collection and not for study. 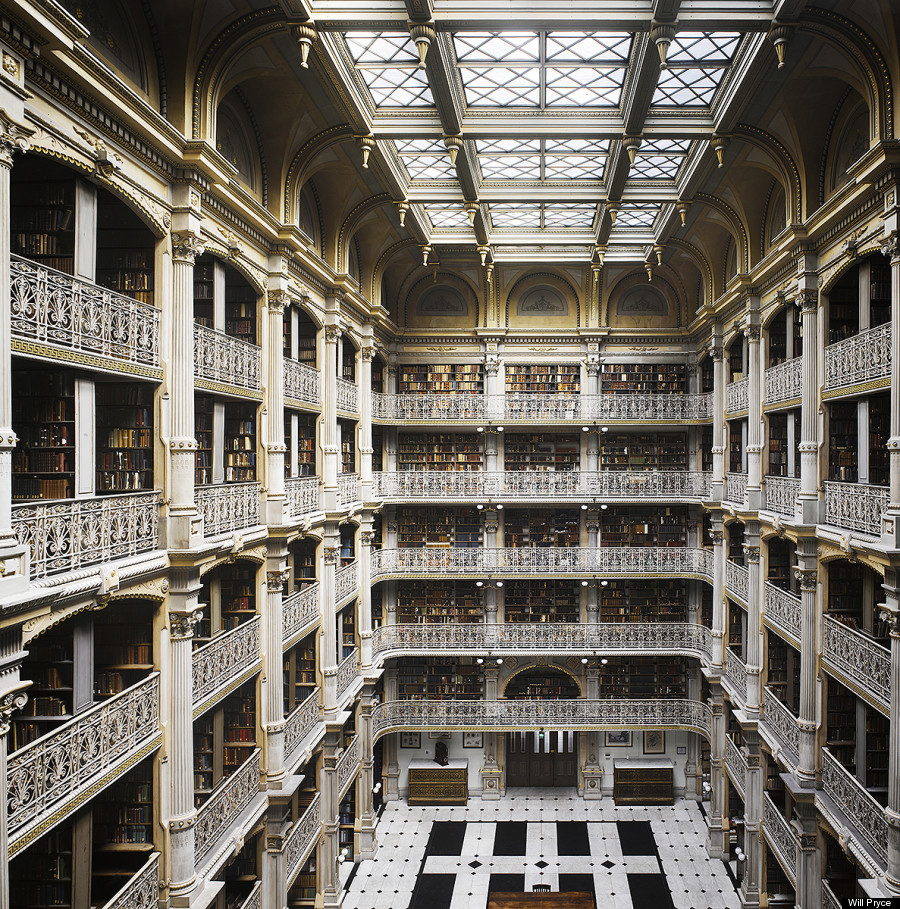 The Peabody Library, Baltimore (U.S.)
Gas lighting and iron created a new form of library in the nineteenth century: the iron stack hall. The Peabody Library (1878) in Baltimore is the best surviving example. Virtually everything in this picture-- the columns, the capitals, the balconies, the railings and the ceiling-- are made of iron. Hot air heating was supplied through grills in the floor. The use of iron also meant that the library could be built over a concert hall, the weight of the books supported on iron beams over the space below. If you are ever in Baltimore, be sure to add this to your list of sights to see. 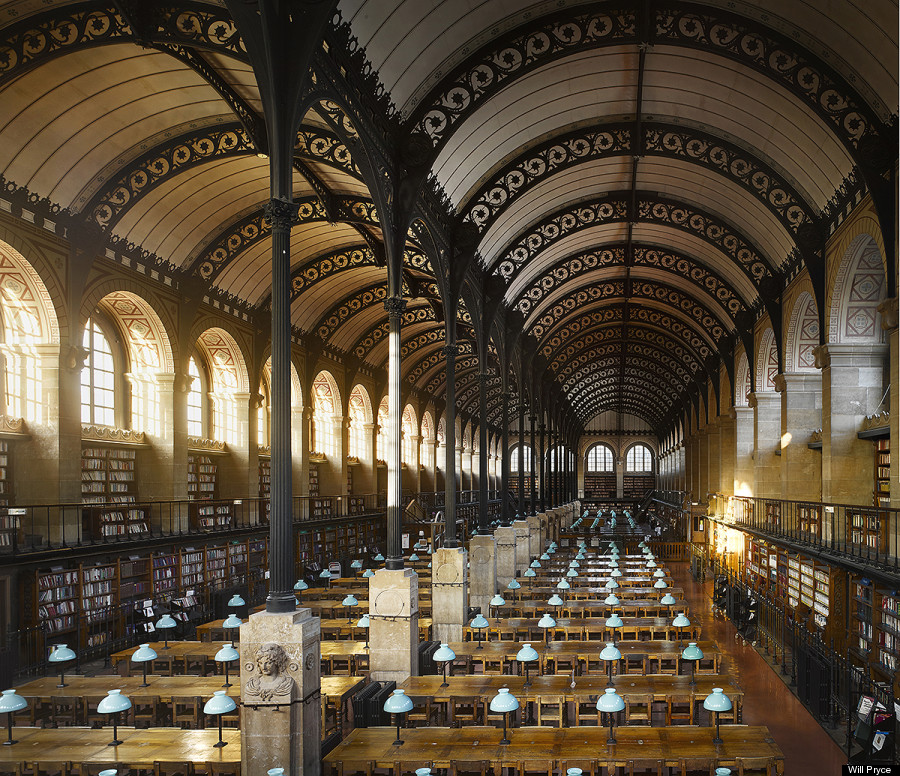 Bibliothèque Sainte- Geneviève, Paris
The exterior of the Bibliothèque Sainte-Geneviève in Paris (1850) was the inspiration for the Boston City Library but the interiors of the two buildings could hardly be more different. The Paris library pictured here consists of a single great reading room, constructed over book-stacks below. Its dominating feature was a delicately detailed iron roof reminiscent of the railway station interiors being constructed at the time all over Europe. The library, by architect Henri Labrouste, is an intriguing fusion of modern technology with classical design. 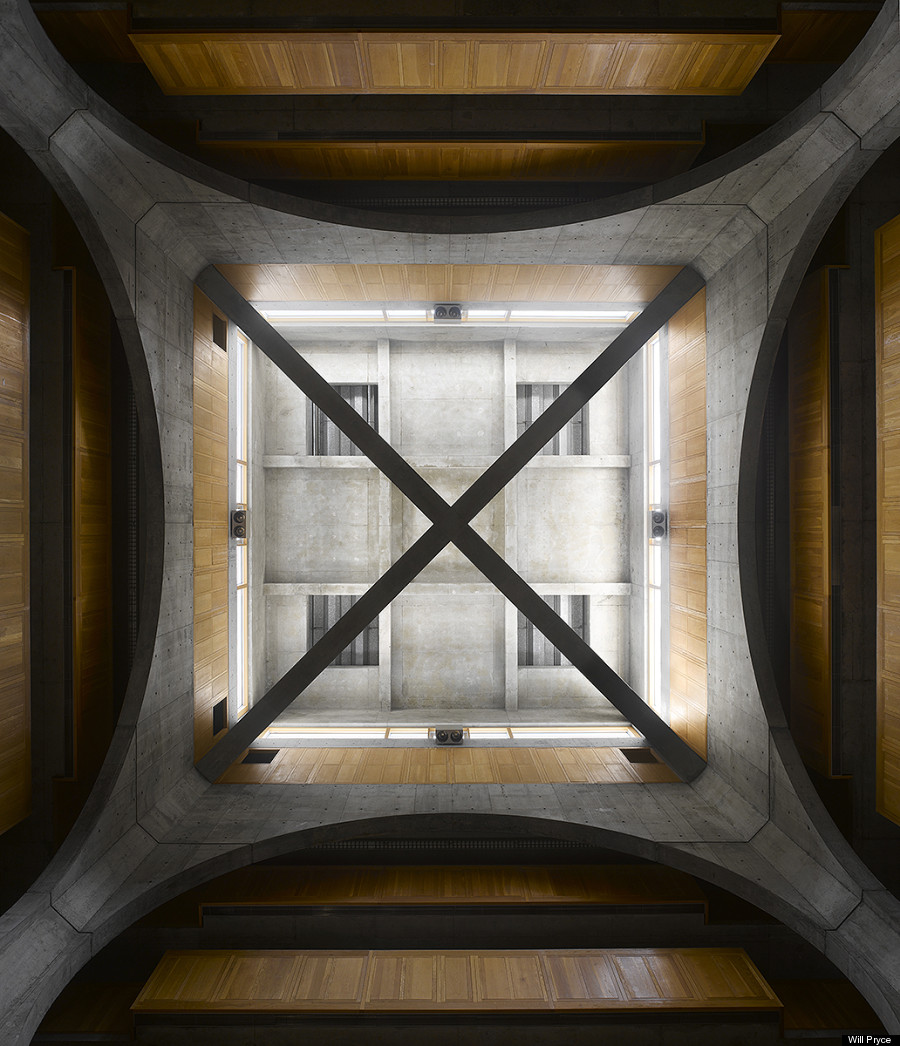 Philips Exeter Academy's Library in Exeter, New Hampshire (U.S.)
An unusual shot of one of the most striking libraries in North America built in the twentieth century. This is the ceiling of the central hall of architect Louis Kahn's library for Philips Exeter Academy in Exeter, New Hampshire. This is one of the largest high school library buildings ever constructed. Kahn's design is well worth a visit. The wooden carrels provided for each student next to the windows are particularly beautiful. 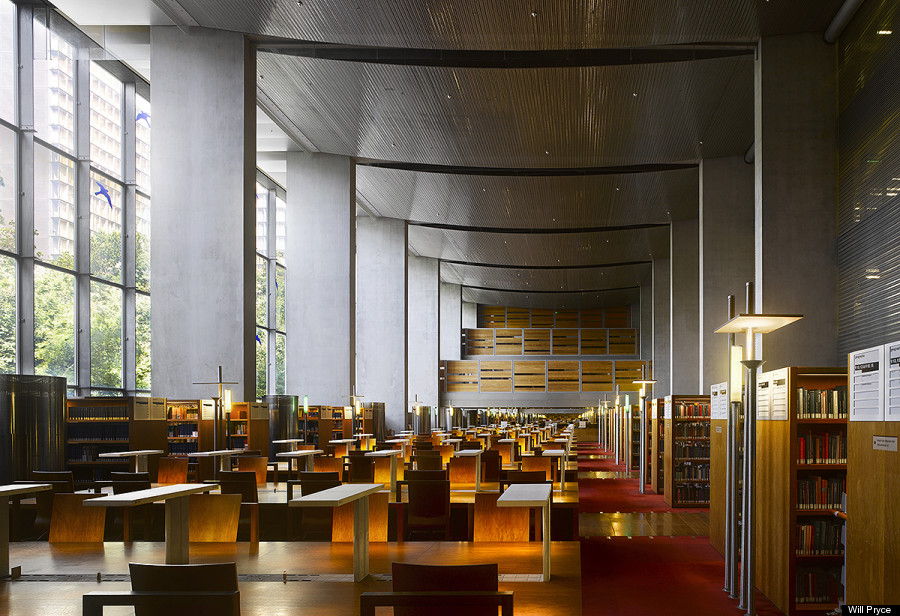 Bibliothèque Nationale, Paris
Of all the modern reading rooms, the one at the Bibliothèque Nationale in Paris is perhaps the most surprising. The library is sunk in a podium and the reader descends through grand halls to reach the reading rooms below, which are arranged around a central garden containing full-size pine trees. Here sitting at your desk, you see a woodland outside, magically transported into the center of Paris. 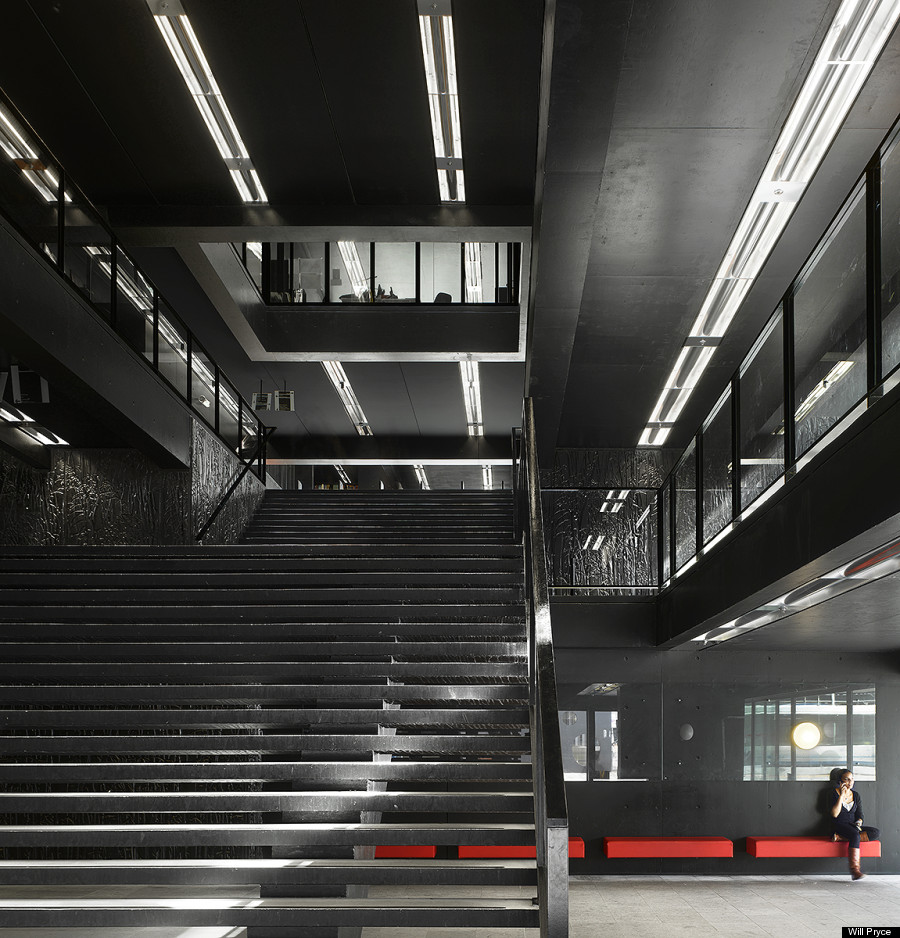 The Utrecht University Library, Netherlands
The Utrecht University Library by Wiel Arets is completely black inside, except for the furniture (which is red) and the color provided by the books themselves and their readers. Light enters the space through windows etched with an image of tall grasses, a reminder not only of the countryside, but of the materials used to make paper. This haunting library with its calm interior offers readers a whole range of different spaces to work in. You can sit in large open areas, enjoying the light coming in through the windows and the sight of dozens of other readers working away around you. Or you can find desks hidden away in the book stacks, far from prying eyes (the perfect place to escape the outside world and immerse yourself in books).