I had already been a few days in Valencia. My hotel, the Ayre Hotel Astoria Palace, was centrally located, steps from the Colón metro stop in the Old City. I was spending my time wandering the alleys and small, cobblestoned streets of the old city, stumbling onto street art, hipster cafés and the odd historical remnant from the past (including a very old tree). There was plenty to see in Valencia's Old Quarter. A UNESCO World Heritage Site where local farmers come every week to settle disputes and, essentially, make their own governing laws. In the evenings, the plazas came alive with a mix of old and young people, tourists, and those cycling past to other areas.

A little bit bored of the historical old town and its' quaint cafés, I finally made my way out of the Old Town, just south of the city's main train station, Estació del Nord, and on the opposite side of the Plaza de Toros. Some small shops, selling knick-knacks and knock-offs, lined the streets on either side of the train station. And then I turned the corner.

A shop window with electric keyboards, t-shirts and other bric-a-brac... Next door: a gate to a club called XTRA LRGE Playground. I'd clearly found my zone. 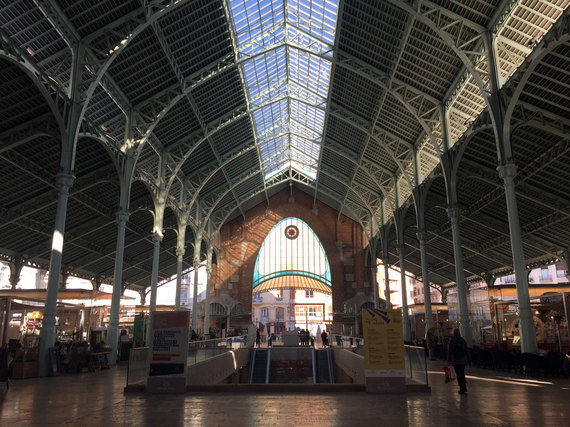 The Ruzafa neighborhood is probably Valencia's most exciting area. Just south of the central train station, it's not only historic, but it's also got the bohemian vibes common to other hipster neighborhoods around the world. Popular with hipsters, young artists and those in-the-know, it's a cool area centered around a few square blocks full of cafés, bars, shops, clubs and restaurants. During the day, you'll find vintage thrift shops and small galleries and bookshops, but at night the streets come alive with a buzzing nightlife. Crowds of people pack into the small restaurants, or spill out onto the streets outside the bars and clubs.

At the center of Ruzafa's hipster heart is the lifestyle shop, Gnomo. The shop-owners have worked with local artists to create a series of Ruzafa-themed t-shirts. The store also sells original artworks by some of the very same street artists who've left their mark on the streets of Ruzafa. Inside the shop, you get the sense that this is a community, and as a tourist passing through -- you're surprisingly welcomed. 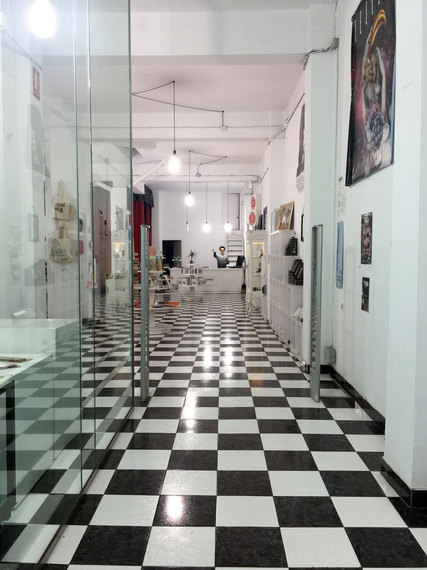 Ruzafa isn't just about shopping, though. But that still seems to permeate a lot of the bars and cafés here, too. The Ubik Café, a locally loved bookshop, also runs events and has a popular café with small bites and drinks available day and night. Another bar, La Bella de Cadiz, is decorated like a vintage shop with oversized lampshades, kitschy furniture and even a mannequin by the cash register. Some of the items even have price tags, so if you're up for more than just a great gin and tonic, you might just come home with more than what you bargained for.

Ruzafa's charming streets and shops are distinctly different from the other areas of Valencia. While the city's most famous tourist attraction is the City of Arts and Sciences (an entertainment-based cultural and architectural complex built by locally born architect Santiago Calatrava), there's a certain coldness to it unlike the Ruzafa neighborhood. A massive complex that towers over the picturesque and carefully maintained park it sits within. Ruzafa, on the other hand, is an organic representation of the city. Out of the run-down buildings and historic streets, it's a revived cultural hotspot--home to some of Valencia's best restaurants and bars. It's the kind of place you can't create, but is rather-created.

Take a walk down the streets of Ruzafa and you'll find yourself welcomed into small, independently owned shops. Restaurants where people share their food with strangers. Even a "microtheatre" where you can catch short, 20-minute theater performances in-between dinner and drinks.

Sometimes you just have to make sure you get out of the tourist area when in a new city and take that risk to adventure a bit further off the beaten path. For more of my tips for visiting Ruzafa, read my guide on where to eat, shop and drink in Valencia's hipster neighborhood. 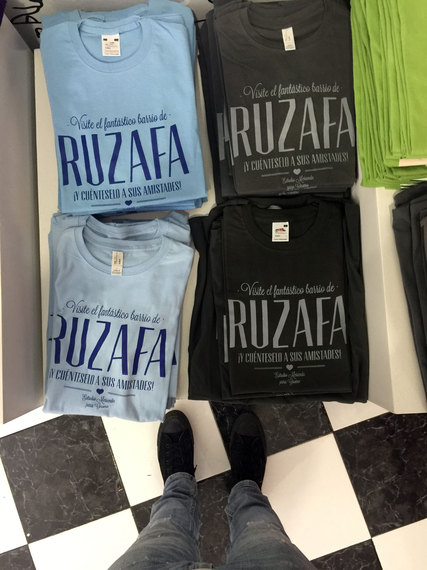 More:
travelvalenciahipsters
Newsletter Sign Up
An essential daily guide to achieving the good life
Subscribe to our lifestyle email.
Successfully Subscribed!
Realness delivered to your inbox