ANKARA, Feb 17 (Reuters) - Twenty-eight people were killed and dozens wounded in Turkey's capital Ankara on Wednesday when a car laden with explosives detonated next to military buses near the armed forces' headquarters, parliament and other government buildings.

The Turkish military condemned what it described as a terrorist attack on the buses as they waited at traffic lights in the administrative heart of the city.

The attack, the latest in a series of bombings in the past year mostly blamed on Islamic State, comes as Turkey gets dragged ever deeper into the war in neighboring Syria and tries to contain some of the fiercest violence in decades in its predominantly Kurdish southeast.

President Tayyip Erdogan said Turkey's determination to fight those behind such acts would only get stronger and that it would not hesitate to exercise its right to self defense.

"We will continue our fight against the pawns that carry out such attacks, which know no moral or humanitarian bounds, and the forces behind them with more determination every day," he said in a written statement.

Video from scene of blast targeted at military vehicles in Ankara, Turkey. At least 5 dead, many injured pic.twitter.com/yrryYPbBak

Deputy Prime Minister and government spokesman Numan Kurtulmus said 28 people including soldiers and civilians were killed and 61 wounded in the blast, which occurred near a busy intersection less than 500 meters from parliament during the evening rush hour.

Justice Minister Bekir Bozdag described the attack as an act of terrorism and told parliament, which was in session at the time, that the car had exploded on a part of the street lined on both sides by military vehicles.

Prime Minister Ahmet Davutoglu, who had been due to attend meetings in Brussels on the migration crisis on Thursday, canceled the trip, an official in his office said. Erdogan postponed a planned visit to Azerbaijan.

There was no immediate claim of responsibility for the bombing.

A senior security source said initial signs indicated that Kurdish militants from the outlawed Kurdistan Workers Party (PKK) were responsible. Separate security sources in the southeast, however, said they believed Islamic State militants may have been behind it.

"I heard a huge explosion. There was smoke and a really strong smell even though we were blocks away," a Reuters witness said. "We could immediately hear ambulance and police car sirens rushing to the scene."

A health ministry official said the authorities were still trying to determine the number of dead and wounded, who had been taken to several hospitals in the area.

Images on social media showed the charred wreckage of at least two buses and a car. The explosion, which came shortly after 6:30 pm (1630 GMT), sent a large plume of smoke above central Ankara.

NATO Secretary-General Jens Stoltenberg condemned the attack. "NATO allies stand shoulder to shoulder in the fight against terrorism," he said in a statement.

Turkey faces multiple security threats. It is part of a U.S.-led coalition fighting Islamic State in neighboring Syria and Iraq, and has been shelling Kurdish militia fighters in northern Syria in recent days.

It has also been battling PKK militants in its own southeast where a 2-1/2 year ceasefire collapsed last July, plunging the region into its worst violence since the 1990s.

The PKK, which has fought a three-decade insurgency for Kurdish autonomy, has frequently attacked military targets in the past, although it has largely focused its campaign on the mainly Kurdish southeast.

More than 100 people died in Ankara last October in an attack blamed on Islamic State, when two suicide bombers struck a rally of pro-Kurdish and labor activists outside the capital's main train station.

A suicide bombing in the historic heart of Istanbul in January, also blamed on Islamic State, killed 10 German tourists, while a bomber killed more than 30 people in the town of Suruc near the Syrian border last July. 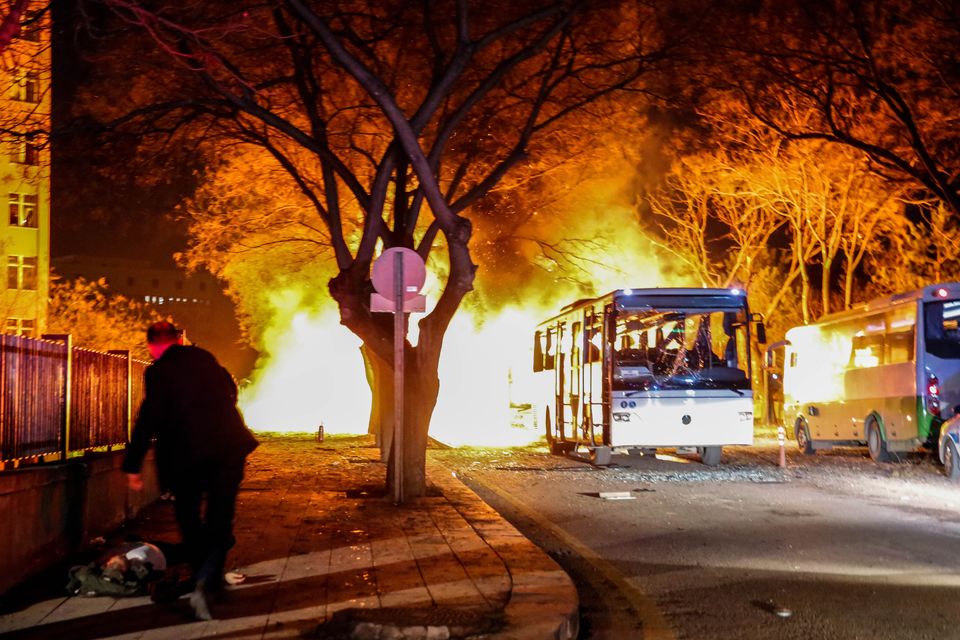