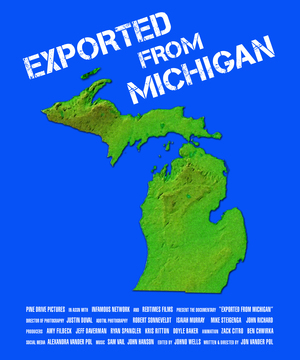 The conversation in America is so centered on the failings of Congress, the ailing economy, and the corruption of big business, yet all of this systemic collapse foreshadows an inevitable rebirth. When people are willing to look at and address their problems it can be overwhelming, but it is the first step towards making things better. Through examining the small communities implementing solutions across the country, the microcosm gives us a window into the big-picture solutions that often look overwhelming at first glance. Independent media is usually fueled by inspired, grass-roots efforts, and the passion to tell important stories which leaves the corrupting hand of big-money interests powerless to shape the narrative allowing for true alternatives to emerge. Exported From Michigan is a fine example of this type of solution oriented, independently produced, community powered media that turns despair into hope.

A few years ago I was inpired to watch The Power of Community, How Cuba Survived Peak Oil and see how a small country was able to adapt to the inevitable changes that will be brought about by an end to cheap, abundant oil. In America we have seen the devastating effects of fracking, The BP disaster in the gulf, and the ways that increased population and declining resources are impacting all of us. Yet there are no real changes at the top of American Society because the campaigns of our "elected" officials were paid for by many of the giant gas, oil, and banking interests that are responsible for the problems impacting our economy, our local environments and our communities. Cuba had no choice but to embrace a dramatic decline in oil after the fall of The Soviet Union in the early 90's by supporting local solutions. Though the film provides a beautiful model of triumph over sudden adversity through cooperation, conservation, and community, there are similar stories unfolding right here in America that deserve attention and support.

Exported From Michigan is one such example, a documentary film about art and entrepreneurship overcoming economic hardship in Michigan. Rising to the challenge of a down economy, entrepreneurs and artists all over the state have created new businesses and revenue streams. From local businesses like agriculture and craft beer to high tech engineering and manufacturing of clean energy systems, a wave of innovation is rippling through the Michigan economy.

The University of Michigan Solar Car Team, which is entirely student-run, and their experience at the World Solar Challenge is the main story in the documentary. The grueling race across 1864 miles of the Australian Outback is a perfect narrative metaphor to the rest of the movie. It involves auto, alternative energy, education, innovation, perseverance, enthusiasm and then culminates in an endurance race for an alternative powered energy prize.

Detroit was the hardest hit by the economic storm and it still has the farthest to go to recover, but urban permaculture and farming is thriving there. Ford and GM are designing and building hybrid and electric cars there. Artists and craftspeople are starting businesses. The phoenix rising from the ashes story in Detroit is already taking place and the importance of documenting and sharing it with the rest of the country is paramount.

Wind, solar and hybrid electric auto have big potential in Michigan. Exported From Michigan explores how businesses in Michigan are innovating clean energy systems. Education also plays huge role in developing a population with critical thinking skills, capable of seeing new solutions to old problems. Ultimately economy is not about gaining wealth, it's about creating a platform for high quality of life including parks, schools, and active, healthy communities.

The documentary has been in production for over two years with six months of hard work left before being ready for film festivals by Spring of 2014. We are in a race to find alternatives and you have the ability to help make this a success and be part of the excitement. Visit their Kickstarter campaign, which ends in four days, and help the documentary get to the finish line! Check out the video below and share this with your friends. Together we are making a difference, a better world is possible...