The Center For Public Integrity just released a blockbuster investigative report that details the intense corporate pressure to block an effective global treaty from being reached at the UN Climate Talks in Copenhagen in December, and to halt efforts in individual countries to limit greenhouse gas emissions.

In addition to fierce lobbying behind closed doors, some of the most aggressive tactics deployed by resource giants such as Exxon Mobil, Peabody Coal and other energy and agriculture interests are often the most public: spreading fear and misinformation about the true impact of emissions regulations.

Some examples from the report:

In the poor, but mineral-rich mountains of the eastern United States known as Appalachia, coal millionaire Don Blankenship hosts a rally for "Friends of America" to hear country music and "learn how environmental extremists and corporate America are both trying to destroy your jobs"...

Around the world the story is the much same. Wherever nations have taken the first modest steps to stave off a looming environmental calamity for future generations, they've triggered a backlash from powers rooted in the economy of the past. Opponents of climate action may have different methods as they pressure different capitals, but the message is consistent: Be afraid that a cherished way of life may be lost. Be afraid that a better standard of living will never be had.

Here's a summary of the full extent of the center's investigation:

Starting in July 2009, the International Consortium of Investigative Journalists fielded an eight-country team of reporters to uncover the special interests attempting to influence negotiations on a global climate change treaty. Relying on more than 200 interviews, lobbying and campaign contribution records in a half-dozen countries, and on-the-ground reporting from Beijing to Brussels, our team pieced together the story of a far-reaching, multinational backlash by fossil fuel industries and other heavy carbon emitters aimed at slowing progress on control of greenhouse gas emissions. Employing thousands of lobbyists, millions in political contributions, and widespread fear tactics, entrenched interests worldwide are thwarting the steps that scientists say are needed to stave off a looming environmental calamity, the investigation found.

The tactics employed have changed over time -- before the Kyoto climate talks, industry lobbyists fervently denied the science behind global warming. Now they generally acknowledge that climate change is real, but attempt to stall and water down any progress in limiting emissions.

The map below breaks down how much each of several major world regions contribute in global emissions. Click on the map for the interactive version on the Center for Public Integrity's website. 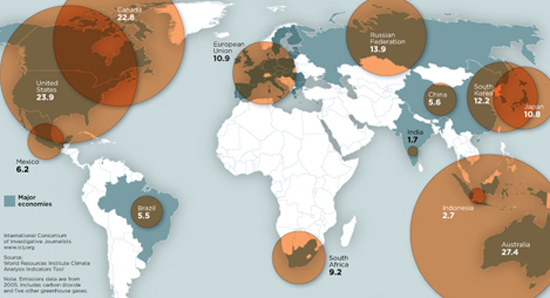 Some other fascinating findings from the report:

A commonly repeated mantra in the media is that tensions surrounding the climate talks center on developed countries not wanting to give up certain standards of living, while developing countries fear that regulations will stifle economic growth. In contrast, this study found that "both developed and developing countries are under heavy pressure by fossil fuel industries and other carbon-intensive businesses to slow progress on negotiations and weaken government commitments. The clash cannot simply be framed as one between richer and poorer nations."

The report also highlighted the astronomical amount of money and effort the energy lobby has poured into attempts to stall any meaningful advancement of climate legislation, particularly in the US. "There are now about 2,810 climate lobbyists -- five lobbyists for every member of Congress -- a 400 percent jump from six years earlier."

To read the whole article from the Center for Public Integrity, CLICK HERE.