Our stories can save or destroy a species. And pictures can make us see our world, as if for the first time. Before the formidable new documentary film Racing Extinction by Academy Award-winning director Louie Psihoyos opened this week, people had already stopped dead on Manhattan streets, gazing up in amazement: Across a shimmering blue Empire State Building, swims a hauntingly triumphant humpback whale; a golden-eyed tiger stares down at strolling city dwellers; a fuchsia-flamed tropical bird fans his wings on the United Nations building; prowling the streets like a big cat, a famous female "carbon-free" race car driver, Leilani Munter, casts Star Trek-like hologram deck images of a blue whale facing her zebra-striped electric car. 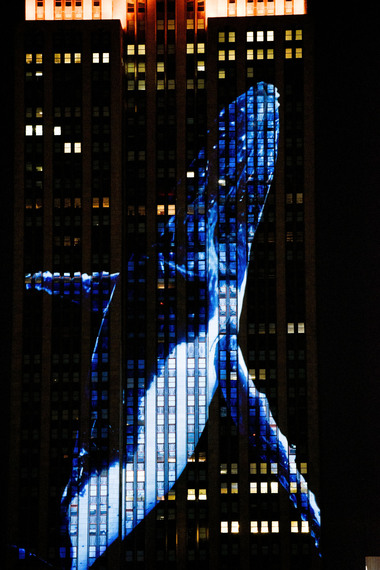 The effect of these animals stunningly alive--racing, winging, and swimming as if they always belonged on our man-made architecture--viscerally restores some balance and truth: We are not here alone on our man-made islands; we are an integral, and too often devastating, part of a much wider natural web.

"When you're talking about losing all of nature, it's not a spectator sport anymore," says director Psihoyos. "Everybody has to become active somehow. The idea is to inspire people."

Racing Extinction does deeply inspire. It also amazes, alarms, awakens, and calls us to action. Like The Cove, this documentary is edge-of-the-seat suspense as we follow Psihoyos, marine activist Shawn Hendrich, and an Australian wildlife photographer, in daring covert operations to expose the thriving $20 billion yearly illegal wildlife trade.

"Just about everything endangered in the world is for sale in China," says Psihoyos. But the United States is the second biggest consumer of endangered species--from illegally fished Omega-3s or whale shark oil to ivory poached for U.S. hunter's guns and knives. "Stop the demand. Stop the supply," explains Psihoyos.

In a "sting" covert operation in Hong Kong--what Henriks calls "the Walmart of endangered species trade"--we witness rooftops strewn with thousands of sawed-off shark fins; in a U.S. restaurant, the film's undercover crew documents the flagrant sale of illegal whale meat; in Indonesia, we witness hundreds of delicate manta ray fins, dried and piled up like so much trash in bloody alleyways. In a truly poignant underwater shot, we see a white shark vainly trying to swim without fins. About 70 million sharks are killed each year, says Psihoyos; and one-third of all shark species are extinct.

"What if you could see how shark fin soup is made?" asks the film's Wild Air.org viral video, featuring NBA's star, Yao Ming. After this video went viral in China, the Chinese and Hong Kong governments banned the soup from official functions; consumption of shark fin soup is down to 70% in China. But shark fin sales in Peru are still on the rise with 15,000 dolphins killed every year because they are used as bait. "When the buying stops, the killing can, too," concludes Ming.

The moral power and splendor of this film is that it doesn't evoke despair or compassion fatigue. It challenges and empowers us to get involved. Opening night in Seattle, our audience gave Racing Extinction a heartfelt standing ovation and raised money for Initiative 1401, Save Animals from Extinction. 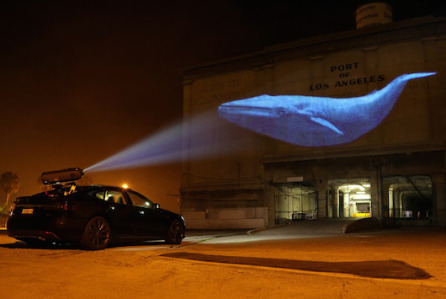 Though some of the undercover imagery of the illegal wildlife trade drew a collective sigh from our audience, we also gasped at the almost overwhelming beauty: a blue whale's prismatic rainblow streams out a double blowhole like a baptism; a brown sparrow's fluttering feathers betray tiny heartbeats; manta rays glide out over our heads, their fins wide to embrace us all.

When Shawn Henrich encounters a manta ray trapped by fishing line, he dives two times to gently remove the sharp nylon line and hook gouged in the manta's head. As Henrich places both hands on the dark rays shoulders, he exchanges a long gaze with this sentient fellow mammal. "The manta knew I was trying to help."

Such blissful reveries in Racing Extinction balance the sight of this same creature speared to death in an Indonesian fishing village, the "ground zero for manta rays," says Henrich. The false Chinese folklore that manta ray gills heal cancer was driving this village's commercial slaughter of this graceful creature. In a panel discussion after the screening, with Psihoyos and U. of Washington's Sam Wasser, Hendrich tells us what the film did not show: Not just one manta was killed that day, but 16. On the bloody beach, littered with hacked up chunks of manta rays, someone pulled a tiny fetus from a pregnant female and threw it around "like a Frisbee."

When Hendrich's expose of this carnage also went viral, Indonesia created the world's biggest manta ray sanctuary in 2014; a government review documented that a single manta ray was worth one million dollars in tourism revenue over its lifetime. Now, tourism thrives in this now popular "Coral Triangle."

The filmmakers returned to the Indonesian village that was destroying generations of manta rays, with a 27-foot screen for a community that has never seen a screen larger than a cell phone. Children gaze up in wonder at the video of soaring manta rays. "These children don't have to be killers," Hendrich says, "They can be researchers and guides." Eyes riveted on the manta ray flying underwater, a village fisherman says softly, "They dance. I thought they were just fish. But . . . they dance."

Yes, other animals are also dancing--and singing. By telling the story of these crimes against and triumphs for endangered species, can we change the ending? Can we truly bear witness and prevent the death of our world's oceans? Can we avert the first mass extinction since the dinosaurs? "If we don't have healthy oceans," concludes Psihoyos, "we don't have a planet."

"Choose one thing," the film encourages. And get involved. Eat more plants and less meat. Pay attention to your traditional Chinese medicines or Omega 3 sources to make sure they do not include endangered wildlife. Eat less tuna, which carries a death toll, says Hendrich, of 5 sharks and dolphin by-catch kill for every one tuna.

We are not doomed to extinction, this film concludes, nor is our natural world. Our stories can help save other species, and they can also save us.~

Brenda Peterson is a National Geographic author of 18 books, including Sightings: The Gray Whale's Mysterious Journey, the environmental mystery novel, Animal Heart, and the recent Your Life is a Book: How to Craft and Publish Your Memoir. www.BrendaPetersonBooks.com