Over the past three months, I have traveled throughout the Gulf region talking to fishermen and local residents hit hard by the greatest oil disaster in US history. I have heard a cacophony of complaints from people who believe BP has fed them an endless stream of false claims and distortions of the truth. But I nearly fell out of my chair when I saw BP's latest threat to Congress: cut our drilling permits and we may cut compensation for damages. NRDC's David Pettit just published an important blog to explain what's going on. 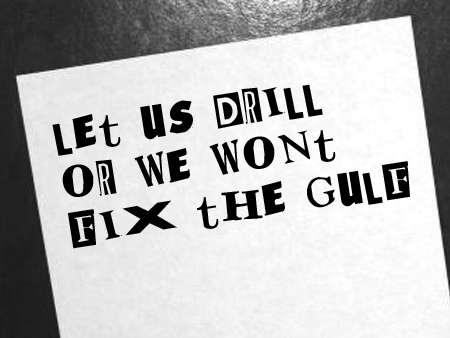 It seems BP’s claiming that they simply cannot promise to pay for the clean up that they already promised to pay for unless Congress eases off stronger drilling protections in the Gulf.  That’s the breaking news from this article in the New York Times today.

BP claims to need the profits generated by current and future oil and gas drilling in the Gulf of Mexico in order to fund the trust that was set up to hold the $20 billion that BP committed to a few months back, and to meet other obligations to clean up the mess that it made in the Gulf.

Apparently, the fourth wealthiest corporation in the world simply doesn’t have any other funds to spare. The $150 billion in revenues in the first six months of this year, (according to BP's latest quarterly report) isn’t a good start. Their recent $7 billion check from Apache for the acquisition of BP assets is not much help.

And given recent news about the ad dollars they been spending, you’d think they might be able to pull from the nearly $100 million dollars they‘ve spent on their “make it right” media campaign since April. Nope – that couldn’t be spared to help Gulf residents either.

Another thing that this highlights is the poor decision by the federal government to allow BP to secure its payments to the trust by future oil and gas revenues in the U.S, effectively making the taxpayers and BP partners in BP’s Gulf operations.  I blogged about this here.

It’s also worth noting that BP’s planning to write off $32.2 billion in losses related to the oil spill. That’s $2.9 billion to cover the company’s response as of July, as well as $29.3 billion in expenses it expects in the future, including the $20-billion escrow fund. Under U.S. tax law, that write off would save BP an estimated $10 billion in taxes this year. U.S. taxpayers, in other words, will eat half the cost of the escrow fund, under our own tax laws.

But wait a minute, back in June the company’s chief financial officer, Byron Grote, briefed investors and analysts on a plan to pay for the fund.

BP said it would put up $5 billion this year – it made its first payment of $3 billion in August - and $1.25 billion each quarter thereafter until the full $20 billion account is funded – three more years, in other words. By eliminating dividends to its investors this year, BP saved $8 billion. It would pick up $2 billion more by trimming its capital outlays over the same period to $18 billion from a planned $20 billion. In fact, said Grote, the company planned to go forward with plans to pay the Devon Energy Corp., of Oklahoma, $7 billion for rights to drill for some 840 billion gallons of oil in Azerbaijan and deepwater properties in the Gulf of Mexico and off the coast of Brazil.

If BP can afford to buy more deepwater properties in the Gulf of Mexico, it can pay for the damage it’s already done. Period. For BP to now threaten to leave behind the mess it made unless it gets its way on Capitol Hill is outrageous.

Looking down the road, we can expect to see this argument again when the federal government begins talking to BP about criminal fines and Clean Air Act civil penalties; together, those are expected to be well into the billions of dollars.  And again when the federal and Gulf state governments, as natural resource trustees, give BP a multi-billion dollar bill for cleanup, damage assessment and restoration costs.

Kicking the level of analysis up a notch, what BP is trying to do here is to mortgage our future wellbeing to a historically unsafe, heavily-polluting, carbon-intensive future.  That is 180 degrees from the direction we need to go, as NRDC’s Peter Lehner has discussed here.  We cannot let our taxpayer dollars, the Gulf clean-up, nor our clean energy future be held ransom at the whim of an oil giant with a nasty habit of going back on its word.

This was originally posted on NRDC's Switchboard blog.