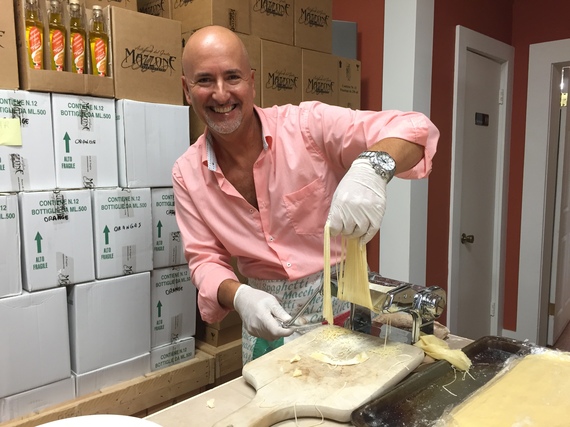 I am clueless about olive oil because my Asian palate is used to soy sauce and sesame oil, so I showed up with bright eyes, wide ears and virgin taste buds - maybe even extra virgin! Robert Gaglio (banker turned Italian culinary extraordinaire) hosted our monthly vocational happy hour at the fairly new Mazzone Olive Oil in south Sarasota on Tamiami Trail (which connects Tampa to Miami) near the gateway to the south bridge of Siesta Key.

I've known Robert Gaglio as a banker, but on November 20, 2015 he wowed us an amazing chef! 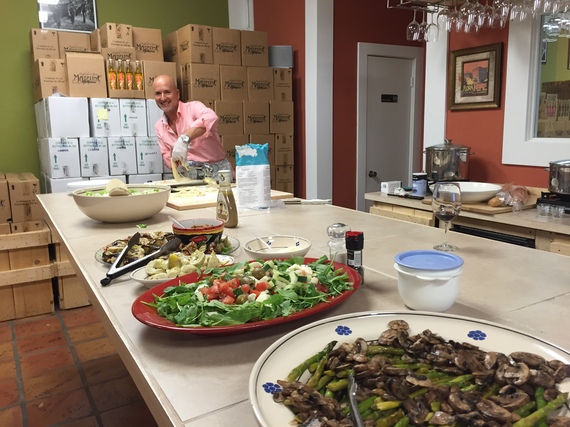 Can you believe that I have never seen a pasta maker in person?! I chuckled to myself that my kitchen houses a rice cooker... Robert was kind enough to explain how one side of the pasta gadget rolls out the fresh pasta and the upper section transforms the newly flattened dough into thin spaghetti. Thank you, Robert, for making this my first interactive version of Food Network! 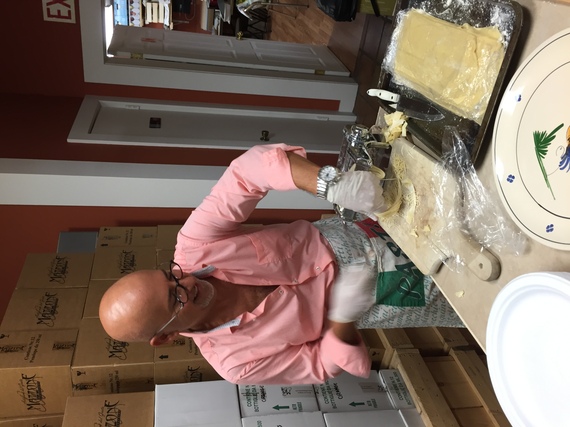 The Rotarians (from the Rotary Club of Sarasota) who attended - ranged from retirees to two CPAs, a physician, attorney, bank branch manager and insurance rep - were delighted with the smorgasbord of healthy food Robert had concocted. 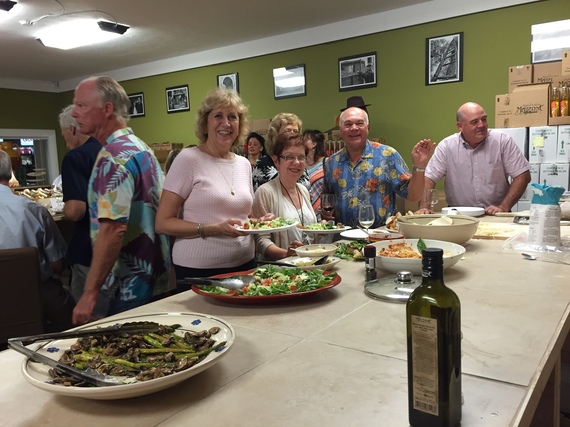 While some folks were sampling the Mazzone wine... 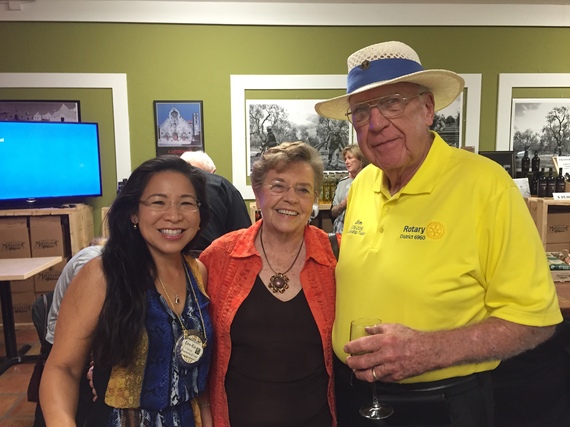 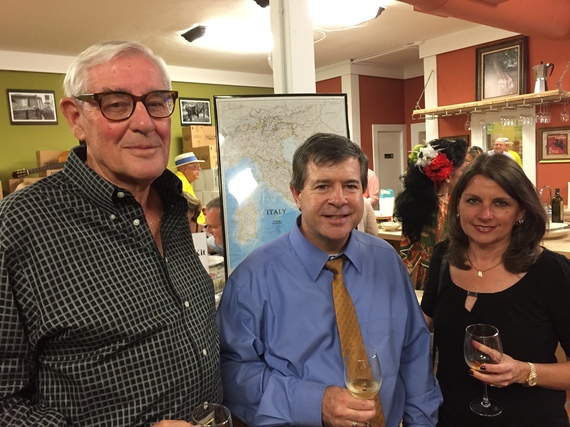 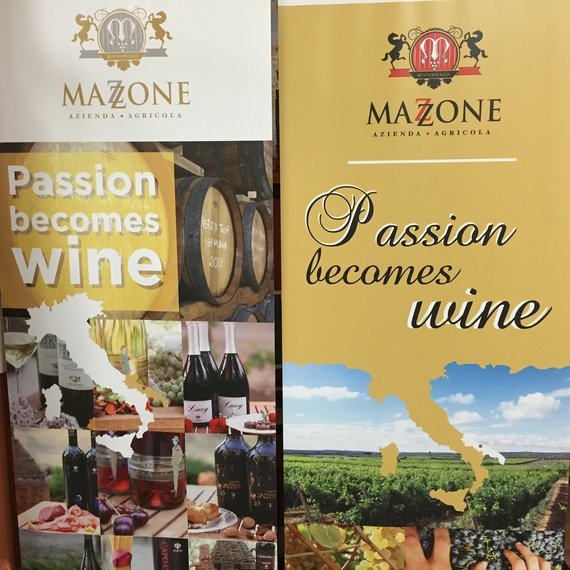 The communal table made us feel like family - a big, Italian family! 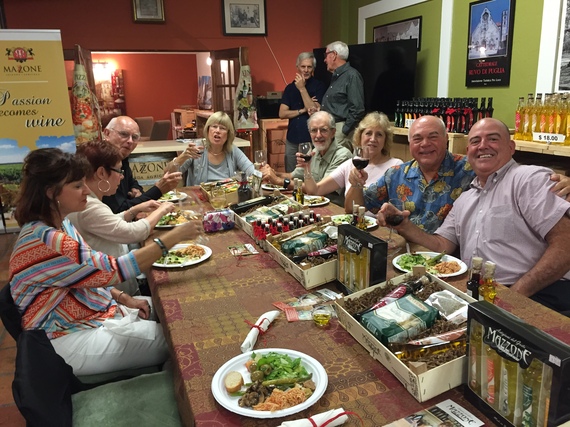 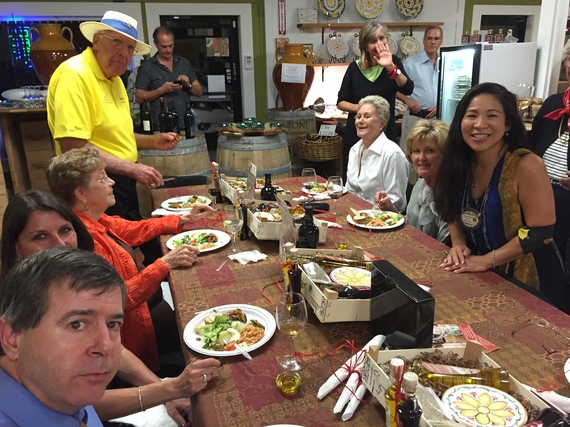 Our taste buds became more joyful, and then Robert Gaglio shared a short video of his Italian Culinary Tours. It was cool to hear about his grandfather, who left Montelepre, Sicily. Later we saw his family name "Gaglio" as a street name in his grandpa's hometown in Italy. 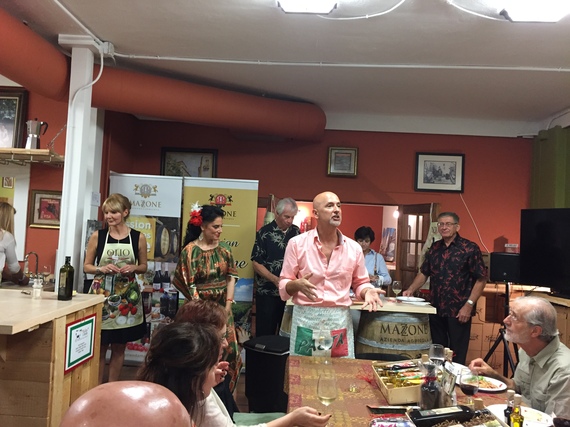 "What made you host this event?" I asked Robert much later. He wanted to educate guests about the "importance of understanding quality olive oil."

Seated next to me was Miss Betty Griggs (who's turning 87 this weekend!); she spent a month over the summer with her two daughters in a Tuscan villa - the same one each summer for 10 years. Daughter Susan Fairbank (living in Puerto Rico) happened to be in Sarasota and joined us with her mother - I was mesmerized by Susie's red patent leather kinky boots! 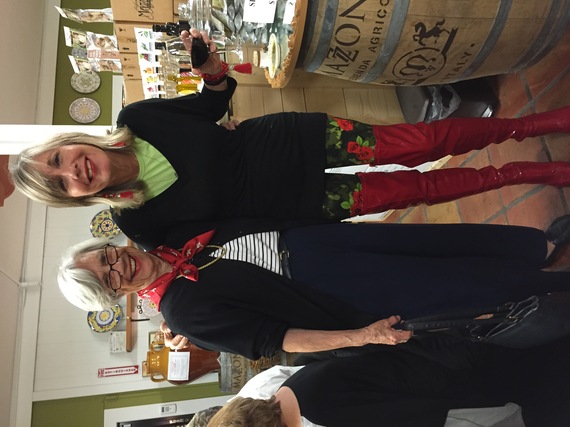 Even Miss Betty and her daughter Susie participated in one of the summer Italian excursions led by Robert Gaglio. While fluent in Spanish, Susie was reciting the Italian names of their visited towns, as if she had lived there a year!

Soon we were treated to the amazing operatic sounds by Seva Anthony, who sang Titanic's theme song ("My Heart Will Go On") in Italian. Her encore performance of "That's Amore" engaged us all to singing and swaying to the tune... 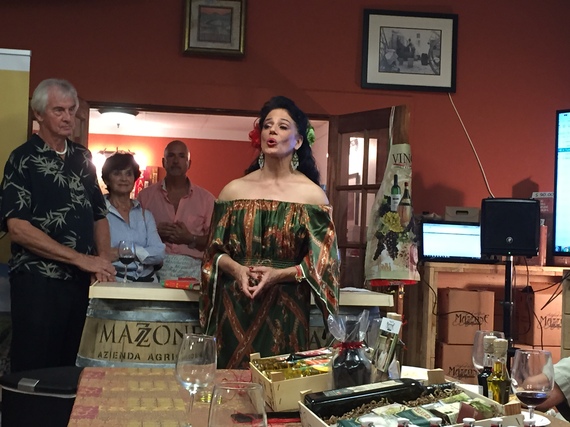 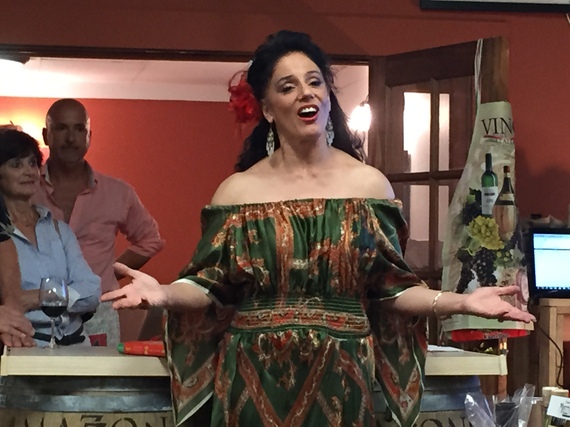 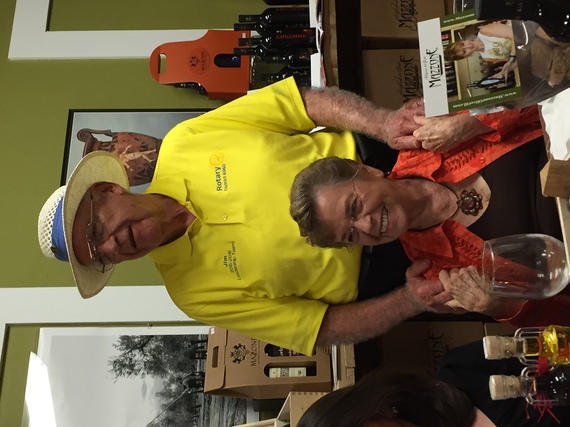 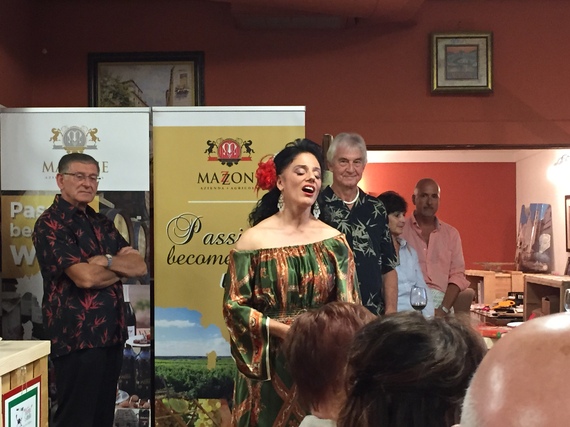 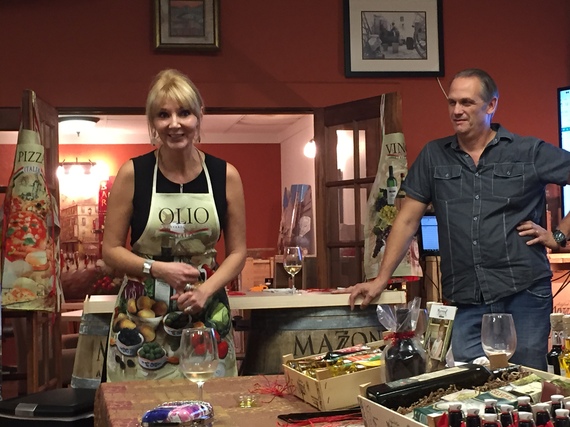 Cinzia espoused that one olive tree can produce 15 kg of olive oil, which is not much. (Yes, Cinzia taught me: an olive is a fruit, rather than a veggie.) Also, olive trees produce every other year. Her hubby Michael was at their Mazzone family's olive orchard about a week ago, and he showed me the stunning photo of their olive trees in Puglia, Italy (with Ruvo di Puglia in the background): 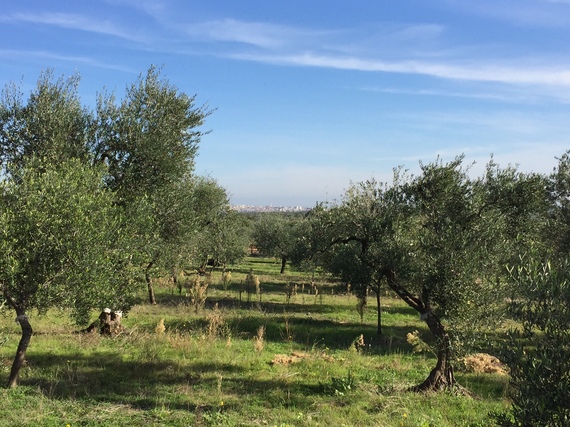 The Coratina olive - perhaps unknown till five years ago - has the highest levels of polyphenols, which significantly help with digestion, arthritis and blood circulation. So Mazzone Extra Virgin Olive Oil is made from the potent Coratina olive. 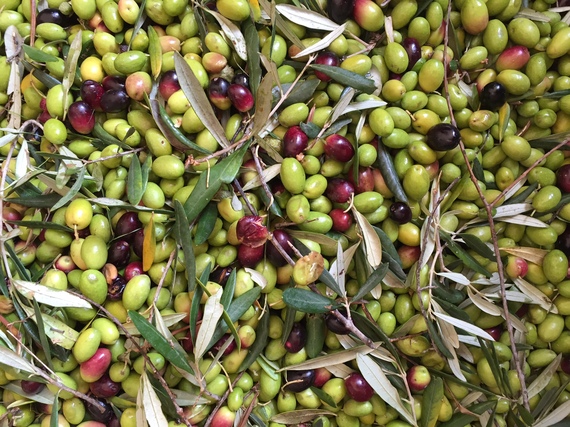 I was also impressed to learn that local chefs in Sarasota cook with Mazzone Extra Virgin Olive Oil. Michael's on East (where I just had my monthly Sarasota Women's Alliance luncheon), Sarasota Yacht Club (where I attended Save Our Seabirds' Arias in Flight luncheon co-chaired by my best friend Denise Colosimo and her beach buddy Nisey Wilterding) and Amore by Andrea (on Longboat Key and the venue for the annual holiday party in December for our Rotary Club of Sarasota) are a few of the fine restaurants where foodies can savor Mazzone Extra Virgin Olive Oil. 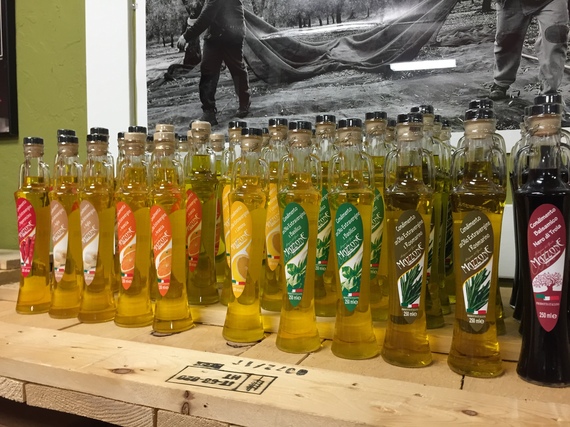 Before we left the yum and fun. 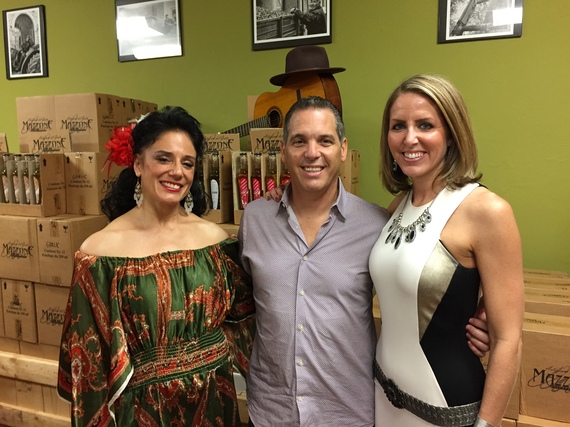 Cinzia's husband Michael got us to strike an energetic pose - meaning that our food was molto buono! ("Very good" in Italian.) 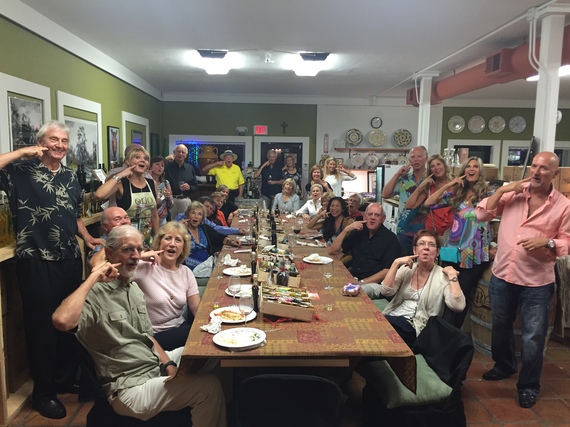 So next time I am in NYC on the Upper West Side, instead of walking into Zabar's entrance and ignoring the huge white buckets of olives to my left, I will peruse the assortment of olives with fascination and deeper appreciation!

Will I ever retire my rice cooker? Probably not, but maybe I will trade in some recipes with sesame oil for more robust flavors of extra virgin olive oil. Perhaps I can drizzle olive oil onto focaccia bread, cook with fused olive oil or simply pretend I am Food Network's Giada de Laurentiis... Ok, maybe I should return to Mazzone Olive Oil shop for their cooking class first!