If Barack Obama and John Kerry give in to Turkish President Recep Tayyip Erdogan's demand to extradite Islamic cleric Fethullah Gulen, it will lead to more than his imprisonment and/or execution. It will signal the death of America's Middle East policy, as no moderate Muslim will ever be able to trust the United States to do what's right.

"Turkey will not be run from a house in Pennsylvania," Erdogan told his people on the evening of the military coup. He commanded that Gulen be sent to Turkey for trial. Analysts are nervous that unless the U.S. extradites him, we won't be able to use the Incirlik Airbase, and it will weaken our fight against ISIS. But kowtowing to the autocratic Turkish president could make matters far worse for the United States foreign policy in the Middle East. Here's how.

First, Gulen's group, the Alliance for Shared Values, condemned the coup at the exact time the military had the best chance of succeeding, when there were reports that Erdogan had fled abroad, and troops had taken over the media. If Gulen actually organized the coup, he sure squashed it when it was most likely to work.

Second of all, analysts have pointed out that Gulen actually has very little influence in the military, if he ever really did. He has more support among the police and judiciary. One source even documents how the military sided with the AKP against Gulen in 2004.

Perhaps that's why Erdogan arrested more than 3,000 judges, faster than he rounded up military officers and soldiers. And it wasn't as though judges were out there driving tanks and firing shots from helicopters. It follows a familiar pattern for Turkey's President Erdogan, who responded to the ISIS attack on Istanbul by arresting Gulen journalists, even though none of them detonated a bomb at the Ataturk airport. Remember, while Gulen was denouncing the coup, Erdogan was crowing that the coup was "a gift from God." 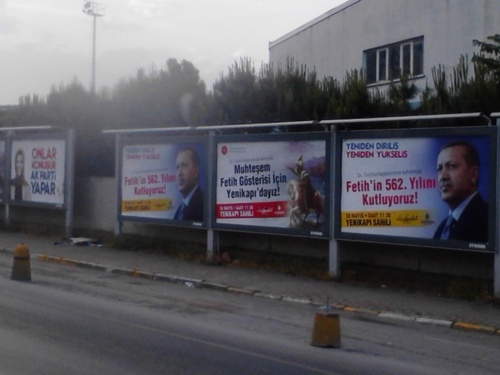 This picture I took in Istanbul of Erdogan's image during the 2015 election season. Though he was not on the ballot, his face was on political posters everywhere.

Third, additional evidence against the notion that Gulen had anything to do with the coup comes to me whenever I write anything about Turkey and this Islamic cleric. I get angry emails from Turkish military secularists and their supporters, who deride Gulen for being an Islamist (even though he's pretty moderate). There's more than enough information to show that the military, which professes to defend the secular constitution, dislikes Gulen's brand of politics, even though he's nowhere near as extreme as Erdogan.

Fourth, America should consider who its friends really are. When America was attacked on 9/11 or other terror attacks, Gulen was among the first to loudly condemn such attacks, running advertisements to show that actions by Al-Qaeda or ISIS violate Muslim doctrines. Erdogan, on the other hand, is less forceful in his condemnation of such attacks, as noted by Fox News. He has sought to restrict America's use of the Incirlik base in Turkey, and bombed America's Kurdish allies in the fight against ISIS. His labor minister blamed America for the coup, and his prime minister said "Any country that stands by the Muslim cleric Fethullah Gulen will not be a friend of Turkey and will be considered at war with the NATO member," according to the India Express.

Finally, the most important reason why not to extradite Gulen, is the signal it would send to moderate Muslims everywhere. Next to defending Israel, the key to America's Middle East policy is to cultivate moderate Islamic allies in the region. What would happen if we send the most moderate Muslim cleric to his death, on the word of a sworn political enemy of Gulen's whose statements on Hitler and Nazis are disturbing, according to critics? No moderate Muslim in his or her right mind would ever have a reason to trust the United States, if we do that. It would be a disaster for the country, as bad as sentencing an innocent man to his death.