Sloths are famous for their eccentric bathroom habits, but this resident of a sanctuary in Suriname, really takes the...bidet. 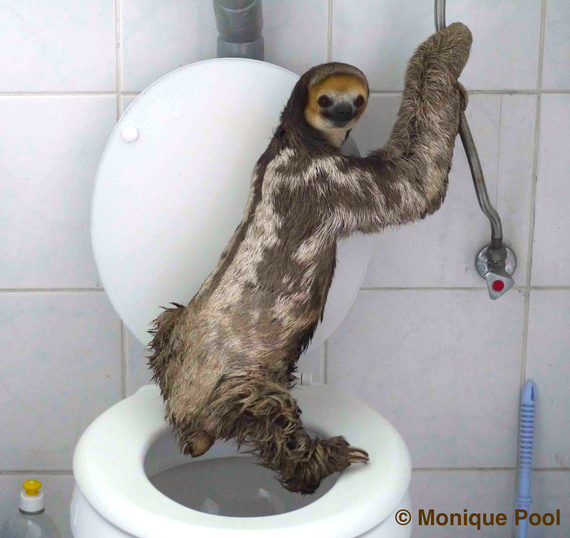 When sloth conservationist Monique Pool rescued a very special sloth, named Danitsja, and brought her back to her sanctuary she discovered something totally extraordinary about her. When she needed to poop, she would slowly crawl into Monique's bathroom, gracefully and deliberately lower herself into the toilet and do her business in the bowl.

Monique was astounded by this behavior. As founder of the Green Heritage Foundation she has rescued hundreds of sloths, but had never met one with such impeccable bathroom etiquette. 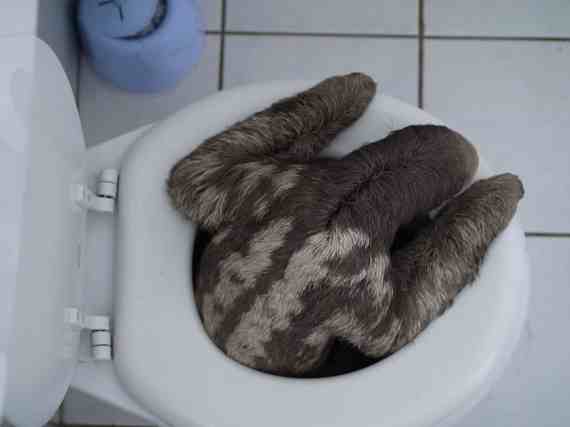 Sloths are famous for their peculiar pooping habits. In the wild, sloths spend their lives camouflaged high up in the forest canopy. But roughly once a week they descend from the safety of their treetop home to do their business at the base of a tree. This behavior had long puzzled zoologists and is now believed by many to be a form of communication. These bizarre bathroom trips may be involved in helping these normally solitary animals mark their territory or locate a mate.

Where had Danitsja's peculiar pooping behavior come from?

In Peru, two-toed sloths have been documented using a research station latrine, but the scientists that witnessed this freaky behavior believed the sloths were using the latrines for dietary purposes. Thankfully Danitsja was using Monique's loo to drop off goods, not pick them up. 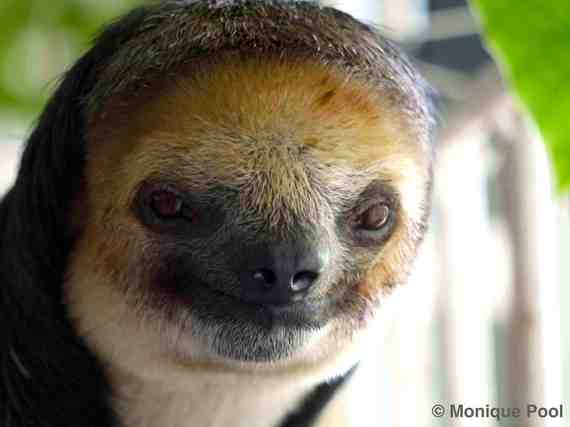 The answer to Danitsja's mysterious behavior was in her claws. She is a rare pale-throated Bradypus sloth and her three long curved claws had been neatly filed to a fraction of their normal length. A big clue that she had been kept as a pet, an illegal practice in Suriname, where they are supposedly protected against such cruelty.

But the evidence was all too clear. She had been discovered by a lady called Danitsja, hence the name, frightened and clinging to a fence post in her backyard. She had a problem with her eye where it looked as if she had been hit. She needed urgent help.

Monique's sanctuary is essentially her home, where the sloths roam freely around the house until they are ready to be released back into the wild. Monique noticed that despite her trauma Danitsja was remarkably well-adjusted to humans. So she decided to keep her separate from the other sloths.

"We kept her separate from the other animals that we had here, in the bathroom. That is when we noticed that she kept not just sitting in the toilet, but she even was capable of lifting the lid herself. It was clear that she had been taught how to use the toilet." 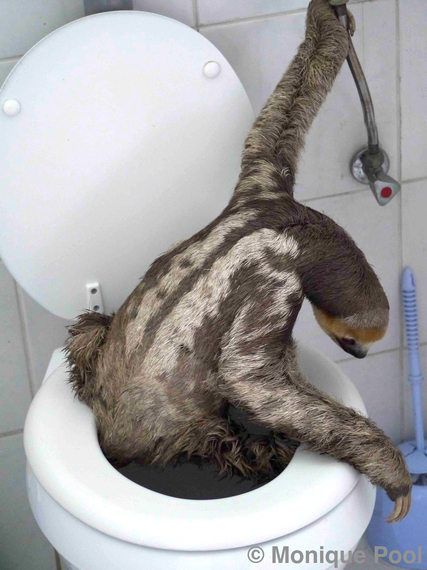 Many people believe that because sloths are slow they are also stupid. Danitsja proves how wrong they are. Not only had this super smart sloth learned how to use the bathroom like a human, but in Monique's care it took her only 2 weeks to learn how to do her business like a normal wild sloth, outside at the base of a tree.

Danitsja stayed with Monique for almost a year before producing a second surprise - a baby. That was when Monique knew it was time to release her back into the wild. "It was clear that the baby would stand the best chances of becoming a big healthy sloth in a naturally abundant environment." 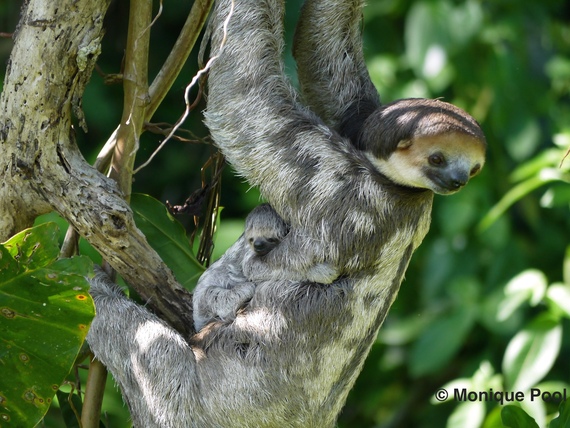 Danitsja is just one of many sloths rescued by Monique every day. She urgently needs a proper place to do this important rehabilitation work and is currently running a campaign to build a rescue center so the sloths don't have to use her home and bathroom like Danitsja. The campaign finishes midnight on January 30th so please learn more at their Indiegogo campaign page. If you miss the deadline, no worries you can also learn more at the Green Heritage Fund website. Please help Monique give sloths like Danitsja the dignity and freedom they deserve and learn more today.

Lucy Cooke is the author of New York Times best-seller A LITTLE BOOK OF SLOTH and host of FREAKS AND CREEPS currently on Netflix.