Extreme Ice Survey, the team featured in the Emmy award-winning film Chasing Ice, joined us aboard National Geographic Explorer to install time-lapse cameras in Antarctica and South Georgia. The cameras will shoot photos every hour of every day, creating visual records of these changing landscapes.

It's hard to believe, but in less than a year, we've expanded our network of time-lapse cameras to include 16 new cameras on South Georgia Island and the Antarctic Peninsula. The cameras, fixed in the gripping cold and howling winds characteristic of these regions, are watchful eyes, helping us understand the rapid changes occurring in these landscapes. Now, with cameras strategically positioned in the Southern Hemisphere, EIS has a truly global network -- an important milestone for our project!

Looking back to last February when we first arrived in Ushuaia, Argentina, with crates full of new time-lapse equipment, our hopes were high but so too were our concerns, as many unknowns stood between us and the successful installation of our cameras. Fast forward two trips and days spent wondering whether or not the cameras would survive an Antarctic winter, we are headed home with a total of 16 cameras in place and more than 15,000 new images! 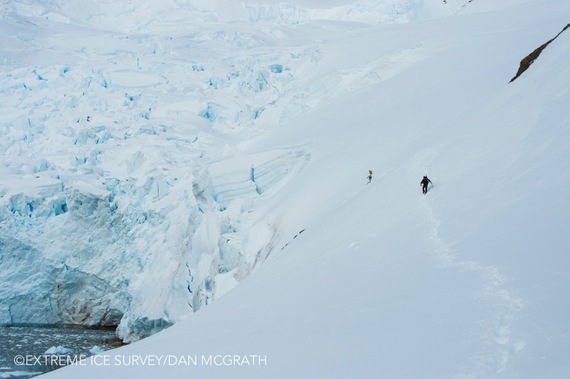 Stephen Nowland, EIS Photographer, returns from time-lapse cameras "AP-02" and "AP-03" at Neko Harbor on the Antarctic Peninsula. These cameras successfully captured over 6,000 images since they were installed. ©2014 Extreme Ice Survey/Dan McGrath

Successful fieldwork in the polar regions can't be attributed solely to hard work or good preparation, although both are important parts of the equation. Here, screaming winds, horizontal snow, and whiteout conditions can make installations downright impossible and worse, present a true threat to one's well being. With a huge sigh of gratitude, I can report that we made it through our most recent journey with thermoses full, rain tarps stowed away, and fingers comfortably warm.

That said, our trip was most definitely not a tropical vacation. Heavy packs, pre-dawn starts, frozen battery boxes, smashed solar panels, back-breaking Zodiac rides, and equipment failures kept the experience lively but just on the right side of enjoyable. Work like this earns the label of Type 2 fun, where Type 1 is playing hooky on a powder day and Type 3 is an awful 14-hour workday racing to meet a looming deadline. You can celebrate Type 2 hardships because, in the end, the good outweighs the bad and looking back, the sense of accomplishment far outweighs the temporary discomforts. 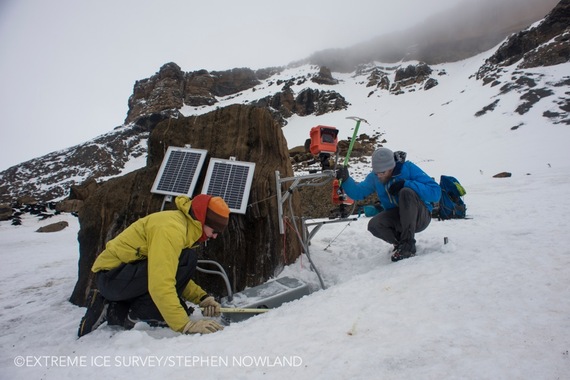 
While weather often presents a major hurdle in the polar regions, logistics also present their challenges. It is with great gratitude and praise that we acknowledge the team at Lindblad Expeditions and the crew, staff, and guests aboard the National Geographic Explorer. Without their support, we simply couldn't have made these camera installations a reality. Lindblad Expeditions-National Geographic's commitment to science and conservation is genuine, and we hope our 16 cameras can serve as a testimony to their values. 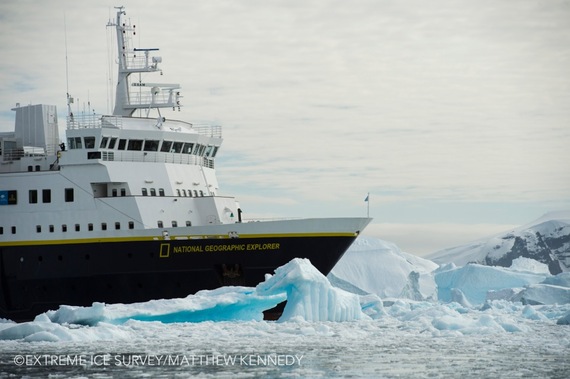 Our initial work is done. Our cameras are hard at work capturing the passing of time and the changing Antarctic landscape. When we return in 2015, we'll download the cameras' images, which enable the compression of time into a documented record understandable from a human perspective. Much like the field notes, documents and photographs left behind by explorers and scientists of the last century, we hope our imagery will play a similarly important role and be referenced for years to come. Only time will tell, but until that moment, we will continue to collect and share our experiences and images to the best of our abilities. We encourage you to join us in this journey!