Extreme Ice Survey, the team featured in the Emmy award-winning film Chasing Ice, is aboard our ship, the National Geographic Explorer, in Antarctica. Over the next two weeks, they'll be installing time-lapse cameras that will shoot photos every hour of every day, creating visual records of these changing landscapes.

There is a particular moment in the mountains, when the clouds part and mysterious summits are revealed, that I find especially appealing. Often, muted gray skies and low clouds obscure the world above, leaving steep ridges disappearing into an atmospheric abyss. This veil of mystery allows my imagination to run wild trying to envision this hidden world. But on rare occasion when the clouds vanish, I find nothing more spectacular than that first complete glimpse of the surrounding snow-covered spires and airy peaks.

On this day, more than 9,000 feet above us and completely hidden by clouds, the highest peak on South Georgia Island, Mount Paget (9626 ft/2934 m), is collecting snow that many years later will reach the terminus of the Nordenskjöld Glacier. We've worked feverishly for the past four hours to secure two time-lapse cameras near the dramatic calving front of this glacier. The 2-mile (3.2 km) wide face of teetering seracs appears still, however the frequent sounds of calving chunks of ice tell otherwise. The size of this glacier is a testament to the amount of precipitation that blankets this island, a small rugged thumb protruding from one of the stormiest reaches of ocean anywhere on the planet. 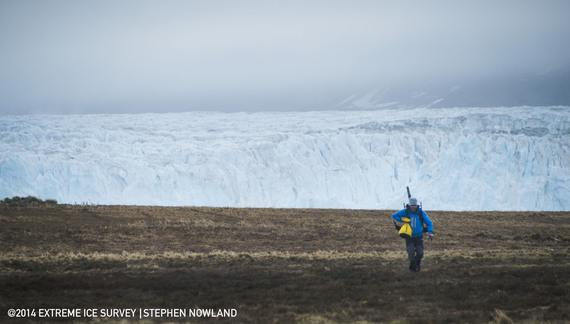 Nordenskjöld Glacier was named for Otto Nordenskjöld, the leader of the Swedish Antarctic Expedition, whose members charted this area in the early 20th century. This glacier, like the vast majority of glaciers on this island, has retreated in recent decades, reflecting changes in precipitation and temperature on the island. Our cameras will tirelessly capture images of Nordenskjöld, creating a visual record that will contribute to our understanding of how the glaciers on South Georgia Island are responding to a changing climate. 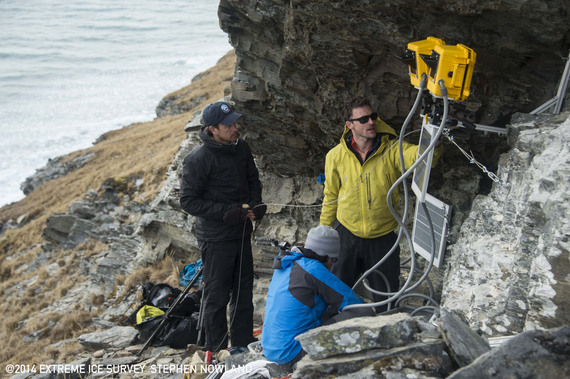 Racing back to our landing site, the cameras secured in place, grins stretch across our faces as we stare into the low light of the setting sun. We set out in our ~19-foot (5.9 m) boat, bobbing in the large ocean swell of East Cumberland Bay. Eric Guth, EIS team member and seasoned Lindblad Expeditions-National Geographic naturalist and photo instructor, masterfully steers us through the deep troughs and cresting waves. The bow of the boat emphatically slaps down on the backside of each wave, sending wind-whipped water across the entire boat, drenching us with frigid 29° F (-1° C) seawater. Our hands grip tightly to the side of the boat, knowing that a swim in these waters would last only a few minutes before succumbing to the numbing cold of the sea.

Through the parting clouds, we can make out the distant shape of the National Geographic Explorer, while in the foreground, the faint outlines of two ship-wrecked rusting vessels can be seen; a not-so-subtle reminder of the potential hazards of South Georgia Island.

Despite these concerns, we're fixated on the scene before us. The dull grey clouds that limited our view all day are clearing away, presenting the snow-covered mountains, each painted in different shades of pink, orange and purple. Above it all, Mount Paget remains engulfed in an imposing lenticular cloud, retaining its mystery for another day. The first images our time-lapse cameras capture will be spectacular and I can't wait to return to see the rest. I know at some point over the next year Mount Paget will be revealed, although given the weather we've experienced on South Georgia Island, I imagine it won't be all that often. 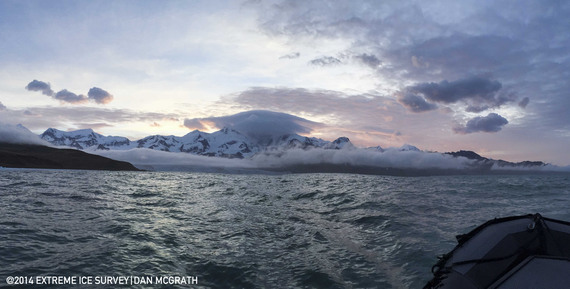