When you hear about 'extreme vacations' you think of space travel, heli-skiing, shark diving...

But this month my husband and I experienced Extreme India. We did not climb Mount Everest. We didn't even trek the Himalayas. No tiger safaris ... or spartan ashrams. We just drove the new national highways of Rajasthan.

Actually we were driven. Mr. Haroon Kahn and his trusted Toyota Camry were all that stood between us and certain death. From Jaipur to Agra, and then on to Delhi we felt the exhilaration that adrenaline junkies can only dream about.

We shared the roads with tractors, rickshaws, ox carts, and bicycles (their owners invariably helmetless). It was not uncommon to encounter camels, elephants, chickens and sacred cows. I'm not making light of the cows by the way. You hit one (or are hit by one) and you will promptly be arrested. Then there are the "free lancers." That's what Haroon calls the stray donkeys and dogs that are thrown into the mix just to add to the chaos.

The highways have barriers to divide vehicles heading in opposite directions. But for the local drivers these are just a 'suggestion.' People pull onto and across the highway with seemingly little concern; and we were regularly confronted by lorries (trucks) headed in the wrong direction straight for us (according to Haroon, that's known as a shortcut. We call it "chicken").
"Expect the unexpected." That's how locals sum up defensive driving Indian-style. As we were determined to sit back (white knuckles and all) and leave the driving to Ganesh (the Hindu god of luck) we made several more observations:

No one uses turn signals... HORNS are much more effective and requested by truck drivers-it's painted on the back of their vehicles.

Side view mirrors are actually OPTIONAL on some Indian cars... to take your eyes off what's immediately in front of you is dangerous/suicidal.

Drivers, particularly of trucks, can stop on a whim. I mean PARK in one of the two lanes of the highway just because they can.

Tuk tuks (3- wheeled Indian taxis) have no maximum occupancy and often had passengers hanging out the sides and the back and in one instance we saw someone sitting on the hood (discounted fare?!)

Near misses are constant, and though we never saw a single accident, statistics demonstrate that there are more traffic fatalities in India than in the U.S. and China.

Indians we met who have been to the U.S. think driving here is boring because people actually stay in their lanes.... 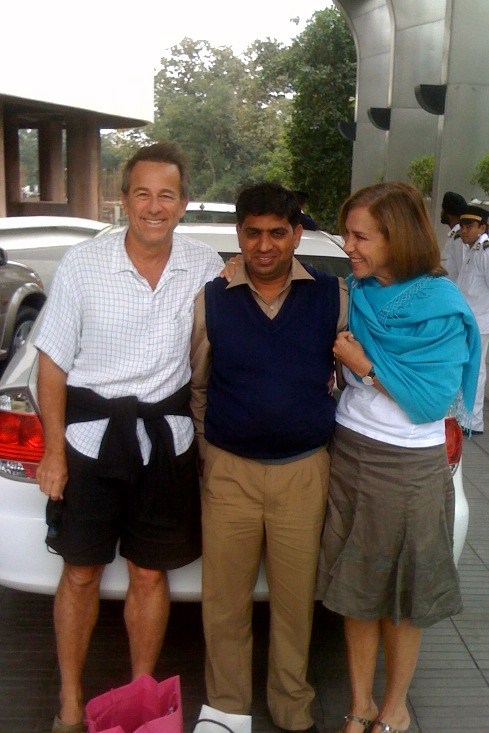 After more than a week with Haroon, we felt compelled to generously reward the man for returning us safely to the airport.

Being Valentine's Day, he knew exactly how to spend his tip.

He exchanged the U.S. dollars for a new cell phone, and then DROVE another couple of hours outside Delhi to deliver the gift to his wife and 4- children. They won't be able to call him while he's on the job however... that wouldn't be safe.