Parkour, mountain climbing and ultramarathon running. People train hard and risk their lives for these sports. Why? I propose these top three reasons:

• The thrill of making the impossible, possible
• The satisfaction of commanding their body and psyche to accomplish goals
• And the elation of completely attuning one's self with the environment 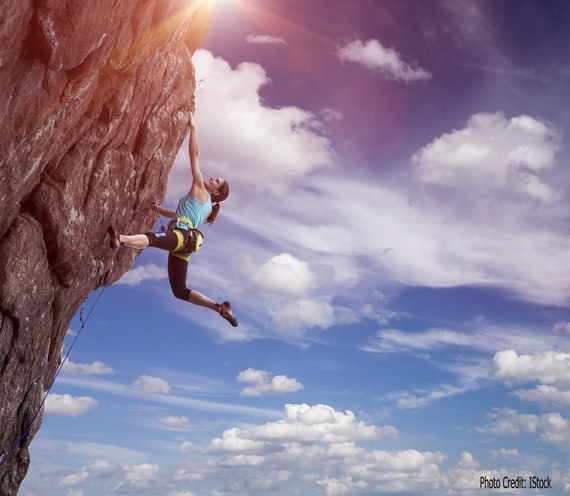 Interesting. These are the same reasons I do Feldenkrais Awareness Through Movement. While it seems unlikely that a work often described as gentle and slow could be an extreme sport, perhaps we should take another look.

Terrance McPartland, judo practitioner since 1971 and now a Feldenkrais teacher, makes the case in his article saying, "People do extreme sports for the reliable experience of bodily presence and the possibility of achieving a joyful organizational catharsis. People do the Feldenkrais Method for the same reasons. That's why it is an extreme sport."

To bolster his case, I'd like to add six often undiscussed characteristics of the Feldenkrais Method that fit with the extreme athlete's experience.

As a Feldenkrais practitioner, I have worked with marathoners, martial artists, mountain climbers, sailboat competitors and professional dancers. Each one of them was quickly challenged. As a student you may not recognize the challenge straight away. You may even wish to bolt, thinking, "What is this? Give me something to do!" This is the moment the arduous training of knowing oneself has begun.

Some years ago, a student sent me a tongue-in-cheek testimonial. It read "Taking classes with Cynthia Allen is to experience a cross between Mother Theresa and a Bobbie Knight. She never stops." It brought me to my knees in laughter then and still does. Feldenkrais Awareness Through Movement lessons can be quite mentally and emotionally challenging, with exquisitely detailed constraints to movement addictions and perceived impossibilities.

It is not only emotionally demanding it can also be physically demanding. One of my colleagues said during the early days of our practitioner training, "I was sure my back was going to break." The lesson we were doing was very slow with minute movements, but continuing to do the action in her habitual way felt like a path to clear injury. From that realization, she discovered a new way that provided the "organizational catharsis" Terrance refers to.

#2 Standing "more is better" on its head

Using more muscle than brain in athletic endeavors is common and potentially injurious. In one training, I recall Moshe Feldenkrais shouting, "Stop it! Stop it! Any idiot can do the movement once. But can you do it again?" He was referring to movement being so well organized that the body is enhanced, not harmed. This is an absolute necessity for reducing risk in extreme sports. The Feldenkrais way invites us to do less, more intelligently, so that we can do more.

#3 Changing the nature of reality

Sometimes something quite profound happens in a lesson that makes one question one's basic world view. I commonly hear, "You mean life doesn't have to be hard?" when someone discovers that a very challenging movement is actually easy. Now that's a game changer for living.

In my own training, Anna Johnson-Chase gave me a private lesson around vision and how it affected my muscular holding. As change stacked on top of change, it was almost overwhelming. When I stood up, my field of vision was gigantic as if it had increased by 3 or 4 times. Later, while meandering in a nearby woods, everything looked breathtakingly vivid and magical. Sounds great, but there was a downside. I said to my husband, "If it turns I see gnomes in the morning, I am going to be very, very pissed." Though I was being funny, I was also serious. It was shocking to realize the world was quite a lot more than I had previously been able to see. The ramifications of how that would play out in my life felt huge.

According to wilderness adventurers, quiet is one of the major challenges. In the Feldenkrais Method, the call to the overstimulated nervous system to simply be, can drive a grown man or woman to bolt. A moment later, the vastness of the quiet can be bliss.

#5 Lost in the wilderness

It may sound odd, but one can get lost in the wilderness of one's own being. Lessons can be disorganizing. In fact, taking it apart so it can come back together is a theme of the Feldenkrais approach. Even in a room of fellow students, one can become disoriented. Unable to tell right from left. Or up from down.

#6 Awareness as a two-edged sword

"If you don't have to be here, RUN!" These were the opening words to a workshop with teacher Russell Delman, a Zen/Feldenkrais teacher. The room was packed with people, many of whom had never experienced the Feldenkrais Method.

First dead quiet, then nervous laughter ensued. Russell went on to share that once you open the door to awareness, you can no longer claim blissful ignorance. The world is infinitely more complex-and simple-than ever imagined. In extreme sports, life is distilled to its essence. One learns about oneself, how one responds to the external environment and how to change the landscape of the internal environment.

This is that priceless moment when it all comes together....

Extreme sports are not for everyone, but the Feldenkrais Method is accessible to most everyone. Moshe Feldenkrais was a martial artist and engineer. His unique science based approach puts the student in the driver's seat. Marry that with the intelligence of the nervous system and each lesson has the potential to powerfully impact the extreme athlete, the injured person wanting to get their life back and everyone in between.