There is a growing chorus of voices asking if California is having its driest year ever. I think that is the wrong question, as I'll describe below, but without a doubt, California is in the midst of another severe drought, measured as the weighted average of precipitation around the state. Indeed, the past two years have both been very dry.

First, to the question of whether this is the driest year on record: the answer to that is either no, or we don't know, depending on how and what we measure. Most people think of a year as running from January to the end of December (the "calendar year"). Measured this way, we don't know yet whether 2013 will be the driest on record because we don't know how much it will rain and snow in November and December.

But water planners and hydrologists in California and indeed, the U.S. Geological Survey, don't measure precipitation based on the "calendar year." Instead, we use the "water year," which runs from October 1 to September 30th. Thus, while the 2013 calendar year hasn't ended yet, the 2013 water year ended September 30, 2013. 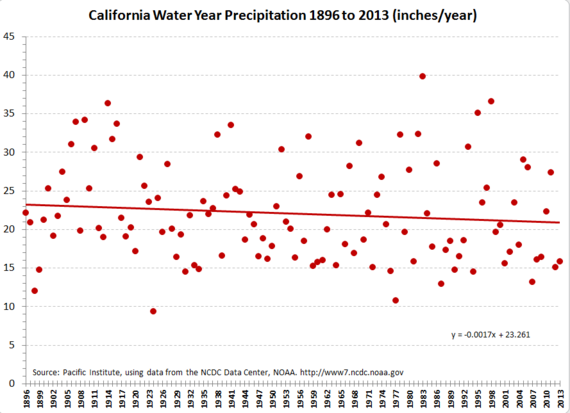 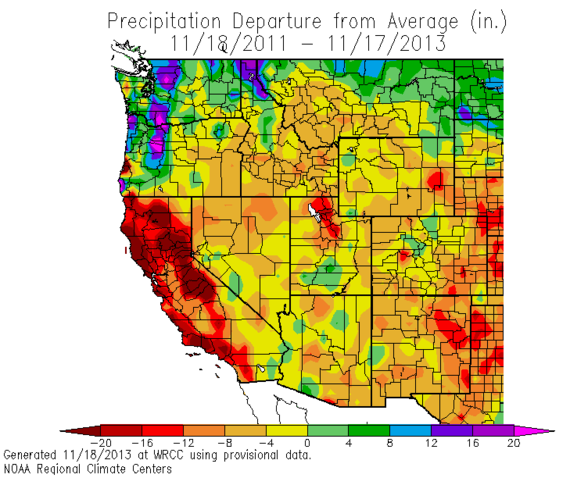 As bad as that is, however, there is an even more worrisome trend. Go back to Figure 1 and look at the trendline. This line shows the trend in statewide precipitation from 1896 (when good records began), and it shows a decline. California precipitation has, on average, been declining, from an average of around 23 inches per year to around 21 inches per year -- a nearly 10 percent decline in the past 117 years. This could be the result of natural variability, disparities in measurements over time, or climate change -- we don't know for sure. But it is bad news in a region where growing populations and demands for water are already an economic, political, and social challenge.

Yet where is the drumbeat for more effective water management and policy? We can't make it rain more. We can't continue to take more and more water from overdrafted aquifers and overtapped rivers. We can explore advanced new supply options such as expanded use of recycled highly treated wastewater, rainwater harvesting, graywater, and groundwater recharge. Even more importantly, we can look at how we use water and use it more efficiently. Where are the statewide incentives to replace leaky pipes and inefficient appliances and industrial processes? Where are the drought restrictions and educational programs to help agricultural and urban water users cut their demands and inefficient uses? Where are the economic incentives for conservation that have been shown to work here and elsewhere? It is easy to mock Texas when one of their official strategies for dealing with drought is to pray for rain. But California's efforts seem no more comprehensive, intensive, or rational.

Here is an assessment of how to save a million acre-feet in California, using proven technologies and policies, at a low economic cost. These strategies should be pursued aggressively and quickly.

It still is. And that's unnecessary and unsustainable.