When we think about extreme sports, the first images that come to mind are those of testosterone-fueled adolescent and early 20-something aged men. Whether they're displaying their dare-devil skills through free climbing, motocross, or on the ski slopes, it's not atypical for endorsements, sponsors and filmmakers to gravitate toward the perceived revenue generators -- young men. For those who proclaim that the reasoning for this is due to a largely disproportionate amount of women in extreme sports, there are indeed less women in the arena but still, women in sports are abundant; they're eager to join their male counterparts in the game of deserved visibility and attention in the sport sphere. They're underrepresented which reduces their influence to microscopic proportions. In effect, the vast majority of them are invisible.

Except for extreme skier, Lynsey Dyer. She has emerged as the apex of the voice for women skiers and women who aspire to partake in all aspects of sport. As a young girl her mom introduced her to skiing and that was it, she caught the "bug." Years later at age 17, fierce in her sport, Lynsey took home the junior olympic medal.

Recently, in a disappointed tone she told me, "Young girls on average won't play a sport steadily past age 15. Their friends stop playing and they're encouraged to do other things."

Often times, the representation of a female athlete is one who is strewn across a magazine cover, scantily clad and characterizing anything except her athletic ability, passion, or deep-seated drive and hard work in her field. In truth, many of us have or will continue to look at that photo and typically feel a certain degree of encouragement to exercise a bit harder, eat a little healthier, or perhaps even give the particular sport a try. But these courageous women who are catapulting themselves off of treacherous mountains are emerging in droves and exclaiming just how badly they want a voice in the industry; a call that aims to inspire young women -- women of all ages, but specifically those aged 11-15 who are at risk of hanging up their skis and potentially never returning.

Lynsey said, "It's easy to receive a call to model for something in the sport but what about showing them some rad jumps and maneuvers? We don't want to do 'fluffy' turns, we want to highlight the extreme stuff but sponsors and filmmakers don't seem to want to see that from women as much as our male counterparts. The image that's currently portrayed isn't our own."

In a segment of Lynsey's budding film, Pretty Faces (received over 100,000 views shortly after its release), she reached out to production companies in order to collect clips to compile a montage of women in extreme skiing footage. As I watched the brief video, the energy and enthusiasm of the women featured was palpable. And although I write this part begrudgingly, as I watched them propel themselves into what looked like an avalanche waiting to happen, after they somersaulted several times through the air, I felt a level of anxiety for them (these women make Lindsey Vonn's skiing look like child's play) more so than I would if I were watching the same footage of a man.

My reaction may have been a result of the nurturing mother inside of me. But even more than that, I'm more willing to believe that it's the fact that I'm not as accustomed to viewing women in such harrowing stunts. Perhaps herein lies the problem -- if these talented and electric women were more mainstream in the media, perhaps we'd become anesthetized to the tension-provoking aspect to their stunts and more exposed to that which lies underneath -- the inspiration.

Lynsey explained the feeling while extreme skiing: "Everyone wants to fly. When you're gliding on powder snow at high-speed you feel like you're flying. And then when you're in the air you feel it even more but the best part is that you feel in control of it. It's a magical experience and it's so great when you know that all of your hard work has brought you to that point of feeling so free in the air."

Lynsey's goal is to produce a film that would cater to the age demographic of 11-15-year-old young women, in an effort to convey the endless possibilities of women in sport and encourage them to continue on with their game. With an average cost of $180,000 to bring a film to market, Lynsey, like many others these days, turned to the crowd-sourcing platform, Kickstarter. She knew that even if she reached a target of $60,000 she could still complete a film. With still seven days to go in the campaign, today she surpassed that at a funding of $70,000.

Many have wondered what a group of women skiers could accomplish in creating impact in a male-dominated media environment. Lynsey and her comrades are well on their way to kicking up some serious powder and showing the world that these extreme adventurers are more than pretty faces. 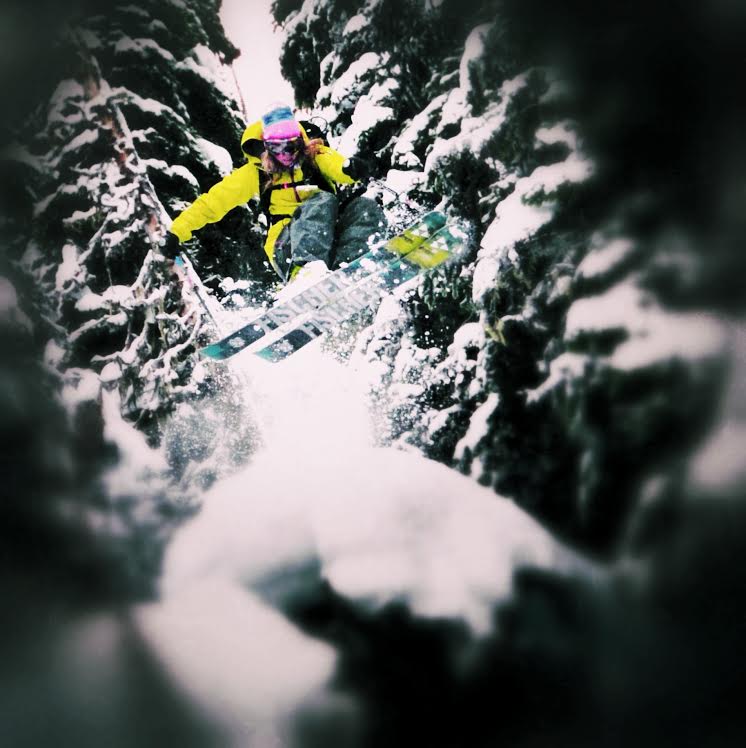