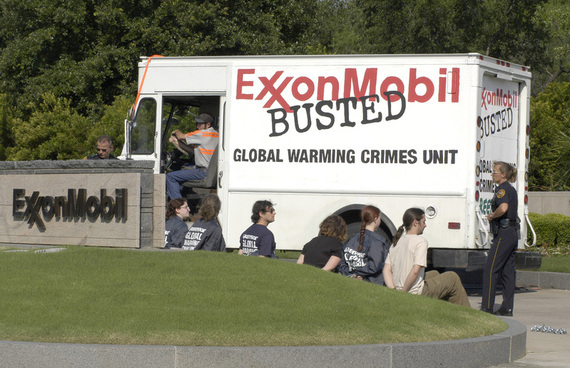 The new evidence comes from reports and emails written by Lenny Bernstein, ExxonMobil's top climate scientist, who worked for Exxon for 30 years.

The documents, which speak directly about the dangers of global warming from CO2 emissions, were released by The Union of Concerned Scientists in a report called "The Climate Deception Dossier."

As Suzanne Goldenberg wrote in the Guardian:

Exxon, unlike other companies and the public at large in the early 1980s, was already aware of climate change -- and the prospect of regulations to limit the greenhouse gas emissions that cause climate change, according to Bernstein's account.

National Academy of Science describing a consensus on climate change from the 1970s.

While it is well known that Exxon opposes climate change solutions and funds climate denial, now we know they knew the truth 27 years ago. Much like big tobacco did with the link between cigarettes and cancer, Exxon leadership has denied the harm the company has done long after the scientific evidence was clear.

"It starts to look like a much longer conspiracy. It's like what we discovered with tobacco - the more you push back the date of knowledge of the harm, the more you delay any remediation, the more people are affected. So your liability can grow exponentially as the timeline gets longer."

Incredibly, Exxon continues to play down their roll in climate change denial. In an interview with the Guardian, Exxon Spokesperson Richard Keil:

rejected the idea that Exxon had funded groups promoting climate denial. "I am here to talk to you about the present," he said. "We have been factoring the likelihood of some kind of carbon tax into our business planning since 2007. We do not fund or support those who deny the reality of climate change.

In fact Exxon continued to fund Soon's roundly debunked research well after the company promised Congress they would stop funding confusion on climate change in 2007.

Exxon spent over $1 million on climate denial groups in 2014 alone.