Jennifer Priston and Michelle Caland are similar in many respects. They both live in Springfield, Ill., attended the same high school and graduated from the same local community college in 2011 after majoring in business administration.

Caland and Priston are also both the inventions of activists, and their fake resumes are now the fodder for a complaint filed against Exxon Mobil, a company gay-rights advocates say is the largest Fortune 500 company to continue to discriminate against gay, lesbian and transgender employees.

On Dec. 4, Freedom to Work, a gay-rights organization that focuses on workplace discrimination, submitted fake resumes for each character for an administrative assistant position at Exxon's Patoka, Ill., office. Only "Caland" got a request for a follow-up interview and activists contend in a complaint filed this week that it's because of one particular item on her resume that set her apart from 'Priston:" Caland volunteered as a secretary for a feminist group, while Priston served as a treasurer for a local chapter of the Victory Fund, a gay-rights organization.

Priston stood apart from Caland in a number of other ways, as well. "The second significant difference between the two resumes was that the LGBT resume was stronger and better qualified for the position than the non-LGBT resume," the complaint, filed by Freedom To Work, states. Priston's resume showed a higher grade point average, more advanced office skills, a higher ranking previous position with a greater level of responsibility, and a longer work history.

Exxon Mobil has long been a target of gay-rights advocates for refusing to add language to its equal employment opportunity policy protecting LGBT employees, and for not providing benefits for same-sex employees' spouses. Despite efforts over the past decade to change these policies, the company has the lowest rating of all Fortune 500 companies, according to Human Rights Campaign's Corporate Equality Index.

"Exxon broke the law, defies industry standards and continues to betray the American people’s sense of fairness,” said Tico Almeida, president of Freedom to Work, in a press release announcing the complaint.

Exxon, for its part, denies any wrongdoing and said it is reviewing the complaint, which was filed with the Illinois Department of Human Rights.

"ExxonMobil's global policies and processes prohibit all forms of discrimination, including those based on sexual orientation and gender identity, in any Company workplace, anywhere in the world. In fact, our policies go well beyond the law and prohibit any form of discrimination," said Charlie Engelmann, a spokesman for the company, in an email.

The corporation’s current equal opportunity policy states it will provide equal employment opportunity to all individuals regardless of race, color, sex, religion and half a dozen other legally protected statuses. But sexual orientation and gender identity are not mentioned.

As gay-rights advocates score major victories in efforts to legalize same-sex marriage, some activists say they are increasingly frustrated by Washington's lack of movement on workplace discrimination. National legislation prohibiting discrimination in hiring and employment on the basis of sexual orientation and gender identity has been introduced in nearly every Congress since 1994, but to no avail. President Barack Obama has not signed an executive order expanding the 1965 regulation prohibiting federal contractors from discriminating on the basis of “race, color, religion, sex, or national origin" to protect LGBT workers, too.

The complaint against Exxon is the first of its kind brought by gay-rights advocates and, according to Almeida, Freedom To Work chose to file it with an Illinois agency because of the state's anti-discrimination workplace protections. This complaint is just the tip of the iceberg, he said.

"We've tested Exxon and other companies, in significant numbers, and we're going to be rolling out results and lawsuits over the course of a year," he told The Huffington Post.

At a Texas Exxon office, a similar resume test showed Exxon requesting an interview from the lesser-qualified, non LGBT candidate only, Almeida said. However, given the lack of federal- and state-level protections in Texas, the company was not breaking any laws.

Read the resumes and complaint.

Below, check out Freedom To Work's infographic that shows the discrepancy's between Priston and Caland's resumes, along with the resumes themselves. 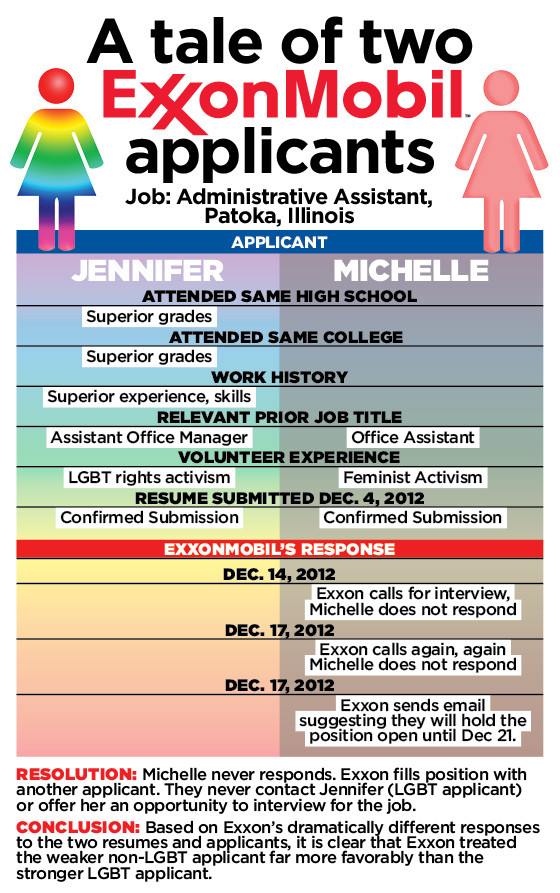