Dr. Bill Chameides is the dean of Duke University's Nicholas School of the Environment and a member of the National Academy of Sciences. He blogs regularly at theGreenGrok.com.

Prince William Sound, 2009. Pictures of picturesque beaches and icy-blue waters might suggest that the effects of the 1989 oil spill are long gone. Dig a little deeper, and a very different picture emerges.

On March 24, 1989, just minutes after midnight, the 987-foot Exxon Valdez oil tanker struck Bligh Reef in the Gulf of Alaska, sending some 11 million gallons of crude oil toward the pristine shores of Prince William Sound.

It was a huge spill, but a host of other factors -- its proximity to the shore, stormy weather with high winds, and delays in starting clean-up efforts -- all combined to make it one of America's most notorious environmental disasters. For area wildlife, the timing could hardly have been worse. The spill occurred shortly before the phytoplankton blooms -- the explosion of microscopic life that fuels marine life -- and migration season. Thousands of migrating birds were headed toward the area en route to new seasonal destinations. In the spill's wake, hundreds of thousands of seabirds perished, along with thousands of marine mammals.

Despite the devastation, many experts were sanguine about the long-term prognosis for the area's fauna and flora. For example, Bruce Wing, a government biologist, assured the Anchorage Daily News a couple of weeks after the Valdez incident that the wildlife will "all come back. In a few years."

That was 1989. Today, a good deal more than a few years later, the degree of recovery is a matter of considerable debate and litigation. Some scientists have concluded that the toxins from the oil spill have largely broken down and dispersed. Exxon has pointed to more than 350 scientific studies they funded that found no evidence of long-term effects (see here and here).

But there are a host of other studies that find that toxins remain and are hindering ecosystem recovery. The Exxon Valdez Oil Spill Trustee Council (established as part of the court settlement between the Exxon corporation and the governments of the United States and Alaska to oversee the sound's restoration) reports that a large number of species, including sea otters and Harlequin ducks, have yet to fully recover. And then there's the herring fishery.

Four years after the Exxon Valdez spill, the $12-million Pacific herring fishery collapsed, sending much of the local economy into a tailspin. While the cause is debated, there is evidence that the collapse was triggered years earlier by the spill itself. The fishery remains closed today. 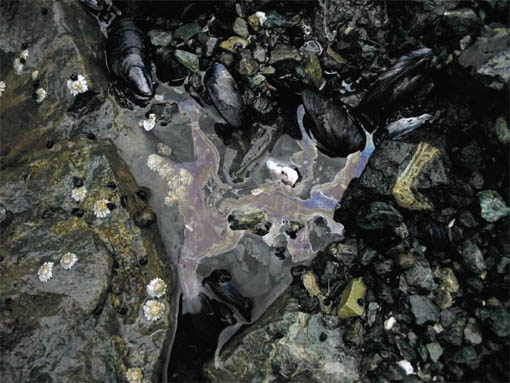 There is evidence that oil from the Exxon Valdez oil spill remains in the area, causing ecosystem damage. This picture shows the transfer of buried oil through the food web -- from mussels, barnacles, periwinkles, etc., then to predators. (Photo by Dave Janka, Knight Island, Prince William Sound, 2003).

Oil Persists and Will for Decades or More

The long-term impact of the spill might continue to be deliberated, but one thing is clear: the oil is still there. Dip a pail into the sand and you may very likely pull up a black, oozy oleo of sand and oil (watch a video of such an exercise). The Valdez Trustee Council writes: "One of the most stunning revelations of ... the last ten years is that Exxon Valdez oil persists in the environment and in places is nearly as toxic as it was the first few weeks after the spill."

Dr. Riki Ott, a marine toxicologist and former commercial fisherma'am, told me that the sound and other areas affected by the spill recovered unevenly: "Some beaches that were moderately or lightly oiled in 1989 have fared okay. The oil broke down and degraded and the wildlife that used the beaches recovered."

"But," she continued, "northern-facing beaches and bays were hard hit in 1989. These heavily oiled beaches still have relatively fresh, toxic oil, buried about 6-12 inches below the surface."

During the first few years of cleanup, beach surveys showed the oil dissipating at a pretty good clip of about 58 percent per year. At that rate, little oil was expected to remain past 1992. However, follow-up surveys in 2001 and 2005 revealed much lower rates of dissipation -- four percent per year or less. At that rate, the Exxon Valdez oil will remain on Prince William Sound's beaches for decades, perhaps a century.

Dr. Jeffrey Short, formerly of the National Oceanographic and Atmospheric Administration, and colleagues wrote in their 2007 report that "such persistence can pose a contact hazard to intertidally foraging sea otters, sea ducks, and shorebirds, create a chronic source of low-level contamination, discourage subsistence in a region where use is heavy, and degrade the wilderness character of protected lands." 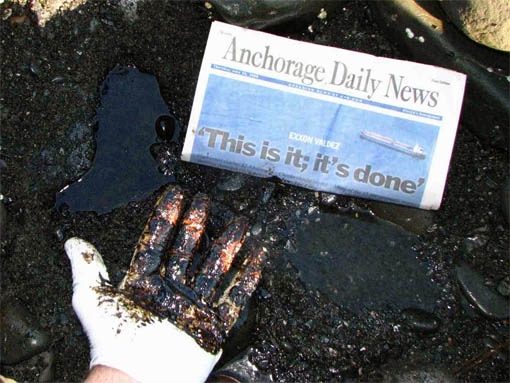 'Doesn't look done to me' was the photographer's comment when he took this photo on Smith Island, Prince William Sound, after the Supreme Court ruled in the Exxon Valdez case in the summer of 2008. (Photo by Dave Janka, July 1, 2008).

A silver lining from the Exxon Valdez spill, if there can be one, has been the intense scientific research that has followed it. As a result, today we have a much keener understanding of oil spills. The oil has proven to be remarkably persistent. Some has been pounded by the surf into a recalcitrant, emulsified, mousse-like substance that resists chemical degradation. Other oil has seeped into subsurface sediments isolated from the elements that would otherwise promote degradation.

The pathways by which the oil spreads its toxicity have proven to be more complex. Jeffrey Short, the government scientist who led the 2001 and 2005 studies, explained to me that a "completely different toxicity mechanism was discovered ... (involving) ... polycyclic aromatic hydrocarbons" or PAHs. These toxins can interfere with embryo development at concentrations 100 to 1,000 times lower than had been expected (see toxicology study).

Before the Exxon Valdez, oils spills were widely thought to present an acute, short-term environmental threat that would rapidly disperse and subside. Now we know it's not that simple. The oil lingers, just beneath the surface, threatening wildlife and transforming the lives of area residents.

The Bard wrote that "the evil that men do lives after them; the good is oft interred in their bones." In the case of the Exxon Valdez spill, the oil is both interred and destined to live long, long after we are gone.