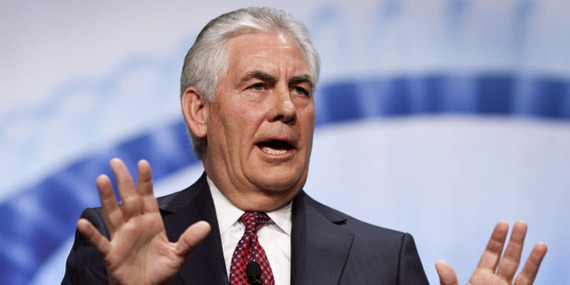 Recent press accounts report that ExxonMobil is now actively promoting a carbon tax. If true, that's big news. It would mean that, after nearly 20 years of blocking action on climate change, the world's biggest energy company has finally come to its senses.

But wait a minute. If something sounds too good to be true, then it probably is. So one might well ask: Is this anything more than a PR ploy?

As I reported earlier this year, ExxonMobil has paid lip service to the idea of a carbon tax since 2009 but, all the while, has continued to fund federal lawmakers who resolutely oppose it. In March 2015, for example, the Senate voted 58 to 42 to pass a budget amendment prohibiting a carbon tax. Thirty of the 40 senators who had received ExxonMobil campaign contributions since 2010 voted in favor of the prohibition. Meanwhile, in March 2013, 156 House members cosponsored a nonbinding resolution stating that "a carbon tax would be detrimental to American families and businesses and is not in the best interest of the United States." Ninety-three percent of the cosponsors were funded by -- you guessed it -- ExxonMobil.

OK, but that was then, and things can change, right? After all, last December, Ken Cohen, the company's outgoing vice president of public and government affairs, blogged about ExxonMobil's strong support for a carbon tax, noting that the company has been holding "countless private briefings with members of Congress on carbon tax policy options."

So how have the company's friends on Capitol Hill responded?

The numbers are unambiguous: When it comes to a carbon tax, there's no escaping the fact that ExxonMobil still funds legislators who don't favor it and, by the same token, doesn't support many who do.

In his December blog post, Cohen traced ExxonMobil's support for a carbon tax back to January 2009, when company CEO Rex Tillerson endorsed it in a speech at the Woodrow Wilson Center in Washington, D.C. Cohen, however, neglected to explain the context for this pronounced break with ExxonMobil's long-held position against any policy that would curb carbon emissions: Tillerson was trying to derail momentum on Capitol Hill for a different approach.

Back then, Congress was seriously considering instituting a cap-and-trade system, modeled after the George H. W. Bush administration's successful plan to reduce acid rain, which would have set a cap on overall carbon emissions and established a regulated marketplace where polluters could buy and sell emissions allowances. The less carbon they emitted, the less they would pay.

The European Union had instituted such a system in 2005 and, although there were disagreements over the details, the idea of a U.S. cap-and-trade system had the support of a number of environmental organizations, including the Environmental Defense Fund and Natural Resources Defense Council, and more than two dozen companies, including oil giants BP America, ConocoPhillips and Shell. Perhaps most important, the plan had the backing of President-elect Barack Obama and congressional Democrats, who then controlled both houses of Congress.

Tillerson was having none of it. "A carbon tax strikes us as a more direct, transparent and effective approach" than a cap-and-trade system, he said in that January 2009 speech. "It is the most efficient means of reflecting the cost of carbon in all economic decisions, from investments made by companies to fuel and product choices made by consumers." Any carbon tax, he added, should be revenue-neutral, meaning it should be offset by reductions in income and corporate taxes.

But there was a major obstacle in the way of Tillerson's preferred solution: It had no political support. When California Rep. Pete Stark proposed a carbon tax just the year before, it attracted only three cosponsors.

Tillerson, who surely knew Congress wasn't about to pass a carbon tax, publicly conceded it faced long odds. "Right now, any talk of imposing new taxes would rattle the markets and individuals," he told E&E News, a trade publication, the same day he spoke at the Woodrow Wilson Center. "...But probably later this year, I think they're going to get around to want to further investigate what their alternatives are."

As it turned out, the House narrowly passed a cap-and-trade bill on a 219 to 212 vote in June 2009. In the Senate, however, it was a different story. The legislation never made it out of committee for a number of complicated reasons, but the fact that fossil fuel interests had plenty of friends in the upper chamber -- many of them longtime recipients of ExxonMobil political donations -- no doubt played a significant role. The bottom line? ExxonMobil ultimately got what it wanted by plugging a carbon tax: gridlock.

There has been some speculation about what motivated ExxonMobil to recently ramp up its pro-carbon tax rhetoric. First, with multiple investigations underway by state attorneys general of the company for misleading its shareholders and the general public about climate risks, it likely feels the need to polish its tarnished image. Second, the company knows that last December's historic U.N. climate meeting in Paris, where 195 countries committed to keep global warming below 2 degrees Celsius, means that it will be harder to maintain the status quo. Third, if and when Congress does seriously consider a carbon tax, ExxonMobil wants to position itself to influence the debate. And finally, ExxonMobil would likely benefit more than its competitors from a carbon tax, because such a tax would favor the cleaner-burning natural gas over coal and ExxonMobil has the largest natural gas reserves of any U.S. company.

These are all plausible reasons, except for one thing: The evidence suggests that the company is still doing what it can to obstruct policies to combat climate change.

Last fall, for example, California Rep. Ted Lieu -- who has not received any ExxonMobil campaign contributions -- met with the company's lobbyists in what was presumably one of the "countless private briefings" Cohen cited in his December blog. Lieu asked the lobbyists what they would do if he drafted carbon tax legislation. They replied that "they would take a look at it," Lieu told InsideClimate News. "They didn't say they wouldn't support it and they didn't say they would," he added. "It's clear that they are not going around championing their position. If they actually believe this internally, then they ought to do so in a much louder way than just quietly sticking it on a website."

In the Senate, meanwhile, Sheldon Whitehouse of Rhode Island and Brian Schatz of Hawaii have introduced a carbon tax bill, the "American Opportunity Carbon Fee Act." Has ExxonMobil endorsed it or lobbied on its behalf? According to Whitehouse and Schatz, no.

"Regarding ExxonMobil's alleged seven years of support for a carbon fee, we've seen no meaningful evidence of that," the senators said in a letter they sent to the company just yesterday. "None of the top executives that make up ExxonMobil's management team has expressed interest in meeting with any of us to discuss the Whitehouse-Schatz proposal or any carbon fee legislation."

Conversely, House Committee on Energy and Commerce Chairman Fred Upton, a climate science denier, explained to Fox News host Steve Doocy in December 2012 that he told ExxonMobil lobbyists a carbon tax was a "bad idea." "I sat down with the Exxon folks a couple of months ago," Upton said, "and let it be known that this is not a proposal that ... is going to be coming through in the House." Nevertheless, ExxonMobil donated more to Upton during the current election cycle than it did in either the 2012 or 2014 cycles.

Besides its political donations and lobbying, the company is still spending millions of dollars a year on think tanks, advocacy groups and trade associations that dispute climate science and disparage climate policies, including a carbon tax. Just last month, ExxonMobil was a lead sponsor of the American Legislative Exchange Council's (ALEC) annual conference, which featured Oren Cass, a senior fellow at the Manhattan Institute, a self-described free-market think tank ExxonMobil has been funding since 1998. According to one conference participant, Cass "absolutely eviscerated the case for conservatives adopting a carbon tax." Conference organizers also provided ALEC state legislator members with a sample resolution against the Environmental Protection Agency's plan to curb power plant carbon emissions.

ExxonMobil doesn't just rely on paid surrogates, however, to spread disinformation and block government action. Company executives may sing the praises of a carbon tax, but they still find time to misrepresent climate science and question the necessity of taking any action at all.

In March 2013 -- the same month 146 ExxonMobil-funded House members cosponsored a resolution against a carbon tax -- Tillerson appeared on on PBS's Charlie Rose, ostensibly to promote one. The CEO told Rose he preferred a carbon tax to a cap-and-trade system, but then he doubted whether scientists knew enough to warrant one. "The facts remain there are uncertainties around climate change, why it's changing, [and] what the principal drivers of climate change are," Tillerson claimed, repudiating the consensus among climate scientists worldwide. He also falsely claimed there is no scientific evidence of a link between global warming and extreme weather events.

Two years later, at ExxonMobil's 2015 annual shareholder meeting, Tillerson again argued that climate models are not accurate enough to justify a dramatic shift away from fossil fuels. "What if everything we do," he asked, "it turns out our models are lousy and we don't get the effects we predict?" He recommended continuing to burn fossil fuels and adapting to whatever happens, be it sea level rise or crop failures. "Mankind has this enormous capacity to deal with adversity," he said, "and those solutions will present themselves as the realities become clear."

Contrary to Tillerson's assertions, climate models have proven to be extremely accurate. A March 2013 peer-reviewed paper in the journal Nature Geoscience, for example, found that the models accurately predicted the rise in global temperatures over the previous 15 years to within a few hundredths of a degree. No matter. When given the chance to set the record straight at this year's shareholder meeting in late May, Tillerson would not back down. "My view on the competencies of the models," he said, "has really not changed."

Perhaps the most revealing statement demonstrating the depth of ExxonMobil's support for a carbon tax, however, came the day before the House resolution vote in June -- the one where nearly 90 percent of the ExxonMobil-funded House members casting a ballot voted yes, a carbon tax would hurt the U.S. economy. A Huffington Post reporter contacted ExxonMobil Media Relations Manager Alan Jeffers to find out what the company had to say. Given the company's supposedly heightened interest in persuading Congress to pass a carbon tax, one would have expected Jeffers to register the company's opposition. Certainly he would explain why the resolution was misguided and tell House members to vote no. It was what some would call a teachable moment.

So how did Jeffers respond?

"We're not commenting on the resolution."

Elliott Negin is a senior writer at the Union of Concerned Scientists. Dave Anderson and Jayne Piepenburg provided research for this article. ExxonMobil federal campaign contribution data was supplied by the Center for Responsive Politics.