Fathers in the U.S. are carving out a new path on work-family balance. Call it the daddy track.

With the “mommy track,” working women unwillingly get placed on a lower-status career path after having a kid. On the daddy track, fathers choose to scale back careers in order to better manage work and family. Or, at least they say they would.

Working fathers in the U.S. were more likely than women to make career sacrifices to better manage work-life responsibilities, according to a survey of 9,699 workers across eight countries conducted by Harris Interactive and consulting firm EY, released Tuesday. About 1,200 respondents were from the U.S. 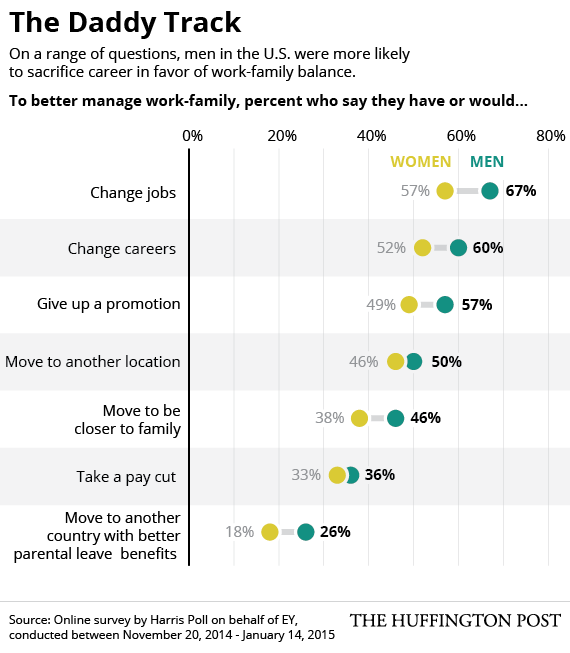 “This is another example of how traditional gender roles are shifting, with men and women taking on more equitable roles,” Karyn Twaronite, EY’s diversity and inclusiveness officer, told The Huffington Post.

Men are more willing to mess around with their career because they have less to lose, Twaronite said. A man who steps off the fast track may be more confident he will be able to get back on. "They’d face fewer headwinds," Twaronite said.

Working fathers are increasingly being forced to reckon with competing demands at home and at work -- something working mothers have long managed.

It’s the norm these days for mothers and fathers to both work while raising a family. In 2014, 60 percent of all married couples with children were dual-earner couples, according to data from the Labor Department. That’s up from 40 percent in 1968, when it was most common for a mother to step out of the workforce. According to EY's survey, 78 percent of millennials are part of a dual-career couple.

The change means that fathers are increasingly taking on more parenting and housework. In 2013, fathers spent about 16 hours a week on child care and housework, compared with about 7 hours in 1965, according to data from the Council of Economic Advisers, cited in the 2015 Economic Report of the President.

Men are increasingly feeling the conflicting pull of work and family. Sixty percent of fathers in dual-earner couples reported feeling conflict between work and family -- either work interfered with family or family interfered with work, according to data cited in that report. That percentage was higher than for mothers -- 47 percent reported feeling conflict.

But it’s not just family life making work-family balance more challenging. Never underestimate the power of money in making things tougher. One-third of the workers in EY’s survey said it has gotten more difficult to manage work and family over the past five years, with about half saying that stagnant wages are to blame.