Big moments in a nation call not only for great statespeople to step up, but also for the wisdom of historians who can put it in context and help us all understand it, to look at the moment as history might even while we are all still in its midst, still struggling to comprehend its import as it unfolds. That's why I loved reading Jon Meacham's cover story in Newsweek this week about Sarah Palin.

Meacham is a historian's historian — his immersion in eras of events and figures preceding ours is obvious from his books (Franklin & Winston, American Gospel: God, The Founding Fathers and the Making of a Nation; the upcoming American Lion: Andrew Jackson in the White House ) and the historical-and-classical namedropping that characterizies his stories. I have gently mocked him for this in the past (he looooves dropping that Scripture!) but only out of love; in truth, applying that kind of global and historical perspective to events at hand is incredibly edifying, if you're into book learnin' and stuff.

Which brings me to the topic of his story: Sarah Palin's unexceptionalism, her mediocrity and her aggressive every-day-ness — qualities for which she was explicitly and ostentatiously selected by John McCain, precisely because she "connects with everyday Americans." This is the phrase which Meacham considers:

Palin is on the ticket because she connects with everyday Americans. It is not shocking to learn that politics played a big role in the making of a presidential team (ticket-balancing to attract different constituencies has been with us at least since Andrew Jackson ran with John C. Calhoun, a man he later said he would like to kill). But that honest explanation of the rationale for her candidacy — not her preparedness for office, but her personality and nascent maverickism in Alaska--raises an important question, not only about this 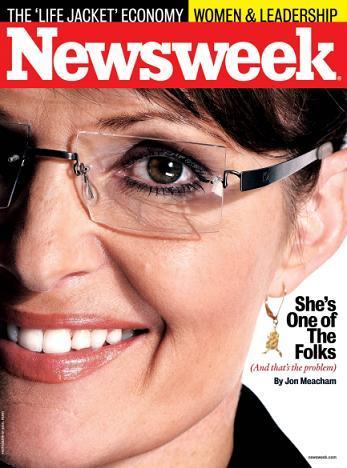 That is it, of course. It leaves behind the weak protestations about how she's the Commander of the Alaska National Guard and about how running Wasilla was actually a lot of work, because that's not why she was chosen. Perhaps if she had known more in the interview with Katie Couric and had surprised us by having a real grasp of interlocking facts during the debate, this wouldn't be the question, but since she chose (and has since chosen) to make her candidacy about her folksy, winky, shout-out-to-the-third-grade-kids appeal, it has become — incredibly — a question of the utmost importance.

Palin sometimes seems an odd combination of Chauncey Gardiner from "Being There" and Marge from "Fargo."...Is this an elitist point of view? Perhaps, though it seems only reasonable and patriotic to hold candidates for high office to high standards. Elitism in this sense is not about educational or class credentials, not about where you went to school or whether you use "summer" as a verb. It is, rather, about the pursuit of excellence no matter where you started out in life. Jackson, Lincoln, Truman, Eisenhower, Johnson, Nixon, Ford, Carter, Reagan and Clinton were born to ordinary families, but they spent their lives doing extraordinary things, demonstrating an interest in, and a curiosity about, the world around them. This is much less evident in Palin's case.

This is so good it makes me want to weep. Of course it should be about that. The celebration of America as a place where anyone can grow up to be president is precisely from that truth, that a person of worth can rise from humble beginnings, overcome obstacles and achieve great things. But the storyline is about how anyone can be president, not how anyone ought to be, just because they decide they should.

That's what Meacham zeroes in on, smartly and non-elitely (despite the reference to Cincinnatus, if you've ever wondered, wondered whatever became of him). He rightly points out that McCain is "is a man of accomplishment and curiosity, of wide and deep reading, travel and experience...smart without being a snob." No one questions whether he has the qualifications for being president — "[w]hy should we apply a different standard to the vice president who would stand to succeed him?"

The answer is, of course, that we should not. "It still seems sensible to aspire to surpass mediocrity rather than embrace it," says Meacham — which takes nothing away from the hockey mom or the Joe Sixpack who might so aspire. Sarah Palin is a woman of obvious gifts and abilities. Can you imagine where she'll be when she actually has the substance to go with it? I'm sure she'll be amazing. But even so, it's not unfair to want her to actually get there first. Per Meacham:

Perhaps Sarah Palin will somehow emerge from the hurly-burly of history as a transformative figure who was underestimated in her time by journalists who could not see, or refused to acknowledge, her virtues. But do I think I am right in saying that Palin's populist view of high office — hey, Vice President Six-Pack, what should we do about Pakistan? — is dangerous? You betcha.

One last thing: This is an important story, but it is especially important as the cover of a special Newsweek issue: The Women & Leadership issue. Every year, Newsweek runs a special package on Women & Leadership and hosts a conference on the same subject, both which feature impressive women who have made a real impact. I love that this cover is running on this issue, because it looks at Palin as a candidate — a person, an American, aspiring toward higher office — and evaluates her on the merits. For a real leader — man or woman — that's all that should matter.

p.s. Newsweek always sends out their covers in incredibly hi-def, and yesterday I couldn't help but notice how amazingly close the photo of Palin was. For some reason, the close-up of her eye grabbed me, not in a seeing-Putin's-soul kind of way, more in the tiny details it revealed, like the few errant hairs beneath her eyebrow or the mascara wedging into the skin below her eye, and the sheen of makeup on her forehead. I am usually not a fan of "gotcha" close-ups of women and their makeup, which I think are meant to make women look older and highlight the need of makeup in a sort of grotesque way (makeup is meant to be blended and viewed from a respectable distance). But here that didn't seem to be the point, since I just got the high-def version and the cover itself is fair and flattering. To me, it just represented a window into what you can see of a person from up close, in an unguarded moment. It seemed a bit like a metaphor for Palin so far — viewed from a respectable distance, so you can't see where she's being enhanced and covered up and slightly reshaped. It is, I'm sure, an image of her face that she would never have allowed to go out, if she'd known what people would see. It just struck me as an interesting metaphor for the face she has put forward during her short campaign, and how seldom we have gotten to see it from up close. 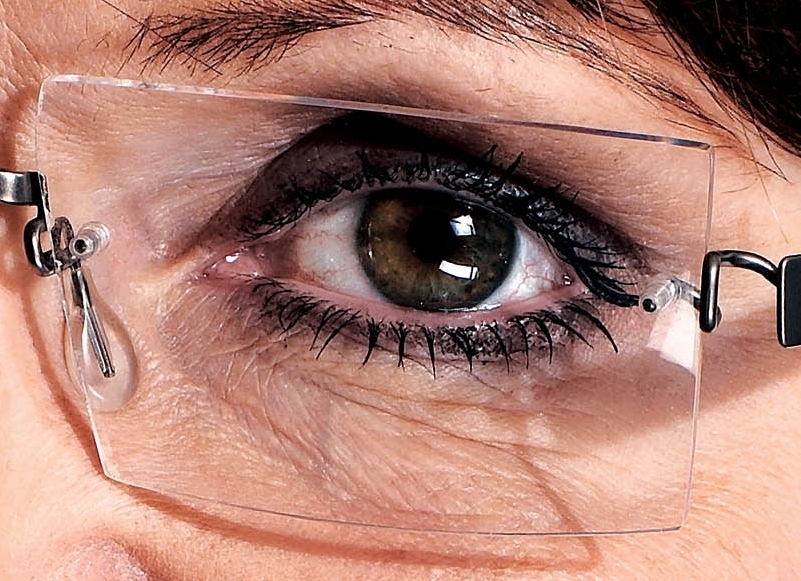