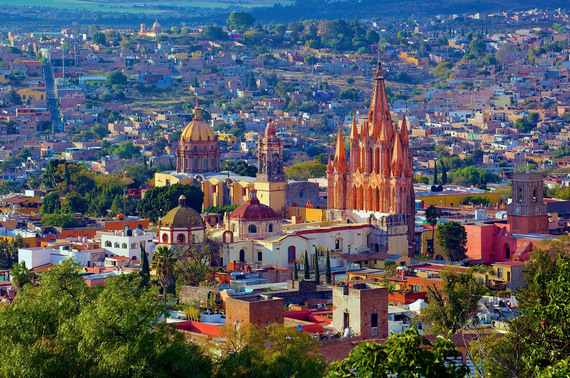 San Miguel de Allende is a city and municipality located in the far eastern part of the state of Guanajuato in central Mexico.

If I had any sense at all, I would stop typing at this very moment. I would stop typing and keep this magical town a secret for a select and enlightened few. If I had any sense, I would allow Donald Trump and his media cohorts to continue painting Mexico and all Mexicans with their cruel and divisive brush. If I had any sense at all, I would pack my bags and return to New York City on the next bus, plane or donkey smoking. But fortunately, I am the worst secret keeper on the planet and therefore must confess I've been bewitched, beguiled, and bewildered by the magical town of San Miguel de Allende, Mexico.

A year ago, if someone had asked me to travel to Mexico for any reason other than a quick holistic trip to Tulum, I would have thought they had lost their ever-loving mind. You see I, like many Americans, had bought into the don't cross the border unless you want to be kidnapped, robbed or murdered rhetoric of the mainstream media as well as uninformed public opinion. It was as if someone had put all the bad news coming out of Mexico on some sort of subliminal, mind-altering loop and it had definitely worked. Then this pass Spring I was hit with one of those life altering and heart shattering experiences - my mother passed away. 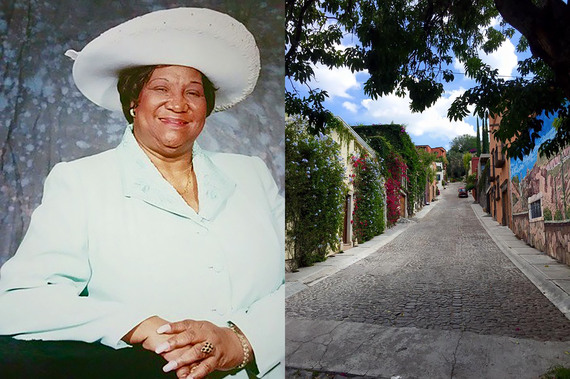 After a twenty year long battle with breast cancer, a battle in which my entire family had deceived ourselves into believing she was winning, on April 10th, 2015 my divine mother, Doris Lee Harris, passed gently into the next realm. The passing of my mother truly sent my entire life into a tailspin. I didn't' know whether to run, jump or swim away from the pain. So I decided I would walk - well not literally. A few weeks after my mother's funeral I packed up my small family, husband and four dogs, and began an old fashioned, Aussie-style walkabout. A walkabout that has mysteriously and gratefully landed us in San Miguel de Allende located smack dab in the heart of Mexico.

Upon arriving in the colonial style town of San Miguel one is immediately struck by its old world charm and beauty. It truly feels like landing in a blush, fuchsia, and mango colored tableau hand painted by Frida Kahlo. There are moments when walking around this UNESCO World Heritage Site with a population of approximately 140,000 you feel as if you may have stumbled into some quaint European town. However, you are quickly reminded by the eyes, salutations and warmth of its inhabitants that you are truly in a mélange of Mexico's unique culture and flavors. 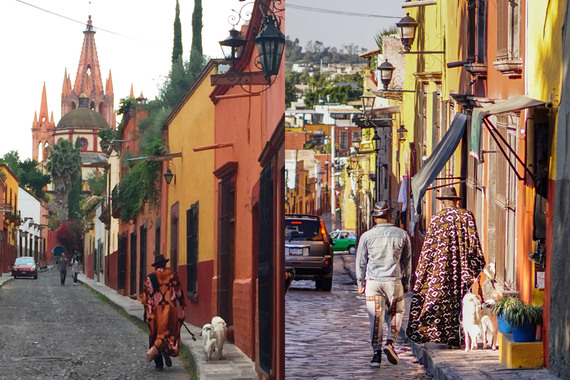 San Miguel is a wonderful melting pot of culture and cool. The town is sumptuous terracotta pot wherein you meet shiny ex-pats named Sunne, Holly, Merry and Rose as well as divine young Mexicans called Jesus, Gabriel, and Angel. You literally can't throw a stick without hitting a mystical guru or earth deity in this village said to sit on a bed of rose quartz. At a glance one might also mistake San Miguel as the new Miami Beach for retired Americans and Europeans as this comprises a definite percentage of its demographic. On the other hand a great number of the ex-pats have not moved here to retire at all - instead they come to reinvigorate, rebrand and reinvent.

In San Miguel you can find former teachers are now powerful real estate brokers, retired accountants have turned themselves into flamboyant interior decorators and seasoned investment bankers have morphed into soulful emerging artists. It's absolutely fantastic. As one that comes from the land of overachievers and annual re-inventors, one can't help but cheer them all on. However, the ones I will always find the most fascinating and engaging are the artists - expats and natives alike.

In order to understand the burgeoning art scene in San Miguel de Allende one must also understand America's longstanding history and connection to this magical pueblo. It turns out that after World War II this small town became a destination and cultural hub for veterans signing up to study art in Mexico under the G.I. Bill, an initiative that allowed former servicemen to pursue their creative passions free of charge. Young veterans came to San Miguel in droves to study art at the venerable Instituto Allende and a great number of them and their families never left.

Personally what I find the most amazing about being in San Miguel at this particular time is the unity and collaborative spirit of cultures and creatives. As the demographic begins to rapidly shift with educated, young, middle-class and wealthy Mexicans, Europeans and Americans visiting and moving to San Miguel, one can literally feel and witness the winds of progress.

While the art lover in me is extremely excited to bear witness to this shift, the curator in me is constantly wanting to get involved with editing and fine tuning a great deal of the decorative cacophony of art spilling out of every nook and cranny of San Miguel. I believe this also comes along with the excitement and echoes of change. While a great number of the local artists are extremely talented it feels as if everyone is eager to show off all of their creative talents, tricks and abilities all at once. A stroll through any of the art galleries, public venues or even private homes can leave a more seasoned art professional a bit confused or overwhelmed. But often times overwhelmed in a good way as you can always see and feel there is tremendous potential for the future.

To further drive home the point of San Miguel's arrival on the big stage, the real estate market is definitely on the uptick. Unlike most upcoming cities and towns going through similar shifts you will never see huge cranes for skyscrapers, or hear the sound of clanging jack hammers and drills destroying the earth's foundation. Instead in SMA you will constantly stumble upon discreet constructions sites with minimal scaffolding with old craftsmen and their apprentices tapping away to build one of a kind dream homes, hotels and restaurants. I often think to myself this must have been what it was like witnessing Rome being slowly built. San Miguel is truly the perfect storm of culture, cool and progress.

While my walkabout of six months is slowly coming to an end, I truly believe my mother's spirit has lead me to my second home. Even when my physical body is in my beloved New York City it will definitely be sharing my heart with San Miguel de Allende and all of Mexico!!!

all photos courtesy of @Malcolm Harris