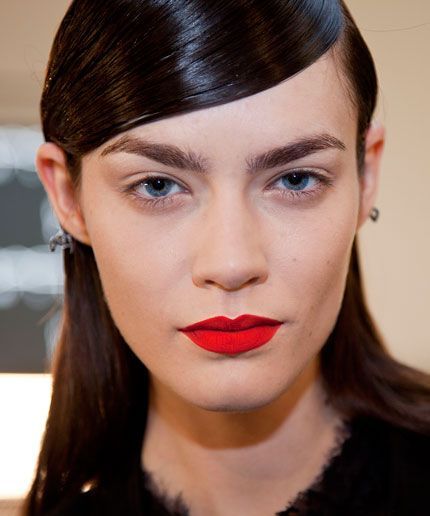 I love brow-tinting. Millions of people love brow-tinting. But it turns out that we might have to give up the treatment to darken our arches and lashes very soon, thanks to new regulations that have somehow been flying under the radar.

In fact, it is already illegal in California for any licensed professional to have eyebrow or lash tint in their possession or in a salon, and to administer tint on or anywhere near the eyes. Technically, the service is no longer allowed to be taught in cosmetology school, either, according to the California Board of Barbering and Cosmetology.

In a statement issued to R29, the group reported that "the FDA has informed the Board that, currently, the additives used in lash/brow tints are not approved for use around the eye area," and went on to state that "unless it's been approved by the FDA, the California Code of Regulations doesn't allow any education on the treatment in schools."

Shocked? We were, too. We were only alerted to the issue this week, after many brow artists began voicing their concern to us, explaining that more and more professionals are being fined by the Board and risk losing their licenses for tinting in salons.

As you might expect, the question of safety is at play. "There are several concerns about unregulated dye near the eye," dermatologist Karyn Grossman, MD, points out. "One is that it can affect the skin -- causing irritation, inflammation, or possible allergic reactions. The other is that it may affect the eye. Even when carefully placed, it, especially lash tint, will seep into the eye. Doctors and the FDA want to make sure that there is no possible way that they can cause irritation, inflammation, or damage to the eye."

One obvious question we got from the brow artists we spoke with: Why now? The brow- and lash-tinting industry has exploded over the past few years, seemingly with no problems. But dermatologist Michael Swann, MD, counters, "The FDA getting involved at this point may really point to...problems they are seeing from consumers."

There's no arguing that beauty should always come second to health, but personally, we'd never heard of any cases of health issues (and just about everyone we know considers tinting a routine part of their maintenance). So we consulted the FDA and the Board.

In a letter from the FDA to the California Board back in March 2013, the administration gave the following reasoning for its suggestion to outlaw the practice among licensed aestheticians: "In a famous case in 1933, a woman who used eyelash dye became blind in both eyes after suffering weeks of intense pain. This, and related eye injuries, influenced the decision by Congress to include in the [Federal Food, Drug, and Cosmetic] Act these provisions specifically addressing this safety concern." It continued: "More recently...reported a 30-year-old woman with...severe contact dermatitis of her eyelids, conjunctivitis, and significant swelling of the periorbital regions after tinting her eyelashes and eyebrow with permanent eyelash dye."

Who does this affect?

However, at least in the state of California, the enforcement is very new. The California Board told us that enforcement "didn't go into effect in its current form" until July 1, 2015. Each state, as you're likely gathering, differs in both regulations and enforcement of the rules.

When asked to comment on the record, numerous brow artists and brick-and-mortar brands understandably declined. Most have pulled the service from their websites and are nervous to advertise tinting. However, this hasn't seemed to have had an impact on the online sale of tinting products -- despite the fact that nearly all brow artists say the DIY route is much more dangerous.
In a statement from 2011, the FDA reported serious concern over eyebrow and lash tints arriving from Europe via website orders.

Rumors swirling about the beauty-pro community in L.A. name coal tar as the culprit -- and it turns out that could be true. In the same statement, the FDA said that coal tar "represented an acute, severe hazard to health with the possibility of permanent injury; i.e., impaired sight, including blindness." So why the hell hasn't anyone remedied this? According to one pro we spoke to, creating a dye without coal tar is very, very difficult.

Is there a solution? The California Board told us this: "If a manufacturer produces a product that the FDA will allow to be used around the eye area, cosmetologists would be able to perform the service. Currently, the Board is unaware of any product that meets the FDA standard for use around the eye area." So until someone creates a formula and gets it approved by the FDA, aestheticians caught tinting through random or planned inspections, or consumer complaints, will be subject to a $500 fine -- or worse. "The more egregious cases, including allegations of consumer harm, may result in formal disciplinary action (including probation, suspension, or revocation) against the licensee."

It's important to note, however, that the enforcement of this regulation isn't fun for anyone: "The Board sincerely hopes that a manufacturer steps up and develops a product that the FDA will get on board with," said the Board.

We'll keep you posted as we learn more.

You can learn more about eye safety on the FDA's website here, or by speaking with your doctor.