Consider this -- two of the best performances of the year center around the smallest of movements, the quietest asides, the slightest shift of the eye.

I'm talking about Bradley Cooper in American Sniper and Julianne Moore in Still Alice -- both actors who illuminate their profession by absolutely disappearing into these Oscar-nominated roles. So much so that you suspend belief and forget you are watching two of the most familiar faces in film today.

This is as much about what they don't do as what they do, the elimination of extraneous gestures, acty-tricks and star turns -- performances transformative in their sheer physicality. A military sniper and a woman with early onset Alzheimer's -- these characters become real as both actors successfully transcend their well-known visages to inhabit the role. No mean feat considering each took on the additional task of portraying an established person (one real, one fictional) from widely-read books and broke through that barrier as well. Becoming the other.

Both seem to have zeroed in on the skills it takes to use stillness to establish fully realized characters, back stories and inner dialogue, using a physical shorthand and sheer presence that defies dialogue. Less is so much more here.

It's all in their eyes. As Chris Kyle, Bradley Cooper's sheepdog geniality, tree trunk torso and teasing, gentle Texan drawl coalesce once he looks through the lens-like scope of the gun. In one shot his eye is magnified like an aperture into the film itself before he gently squeezes the trigger. His eyes are the American Sniper; every time he aims to shoot they identify the very soul of this film. When there is a sudden noise back home -- a lawnmower or an automotive drill in a garage -- the obvious move would be a jumpy startle; instead, Cooper's eyes focus inward like a snake, ready to strike. He barely moves, his face just goes within. I've never seen anything like it -- he does it twice. And it's in his eyes that we see the anguish for lives taken even as he steadfastly denies the cost. 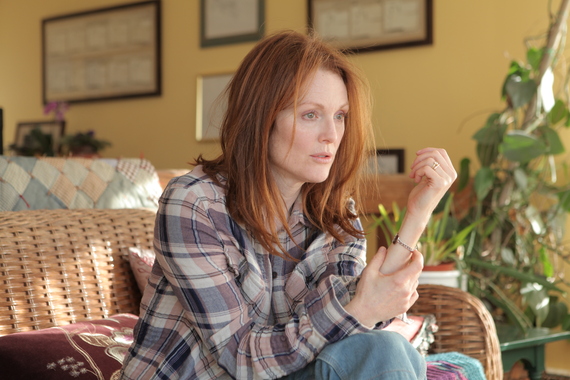 Julianne Moore's eyes literally lose their light right in front of us. Clear, responsive, both warm and sharp, the face of her Alice, a talented professor, twinkly wife and doting mother of three becomes fixed and ever more blank as her wasting disease progresses. The first time she becomes disoriented while jogging to the steps of the Columbia University library her eyes cloud and withdraw with the only special effect being of her own making. As she continues to lose then hunt for words, names, faces, recipes, the bathroom -- we watch her face slacken, her body stumble, and her gaze literally turn within. She is lost but remains right with us to show us where she going -- in and out of the lonely blankness that is her new identity. This is a finely calibrated mastery of expression that culminates in the final scene where she emerges from her own disappearance to speak and recognize love. Still Alice.

These actors are not only taking on complex characters but huge issues as well -- the exacting violence of war, the tragedy of fading away into the lonely static of Alzheimer's. Both use their bodies to supreme effect: Cooper's bear-like agility as he zeroes in for a clean kill, Moore's metamorphosis into a dazed child who clings to her husband as he orders her frozen yogurt.

Allowing the audience to fully realize the people they are playing -- a transformation so brilliant and absolute as to be seamless. Bravo.