Raising Icelandic horses is a challenge, even in the best of times. Although there are no predators and few diseases in Iceland, the short growing season, harsh climate, and rocky terrain have resulted in a small, easy to handle, but very hardy, breed. 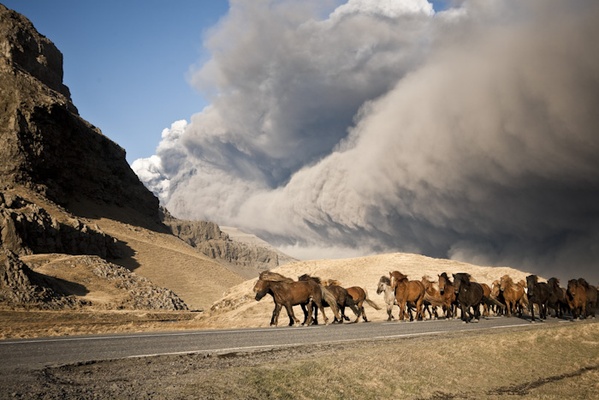 What creates unique challenges for the Icelandic breeder though, are the frequent volcanic eruptions near the prime grazing lands in the south of Iceland, which has for centuries been home to many of the country's largest and most prosperous farms. Many horse breeders have ranches west and south of Eyjafjallajökull where they breed and tame Iceland's world renowned horses.

Although most of us would imagine that the main danger from volcanoes is the lava flow, there are many other less obvious, and even more hazardous effects. 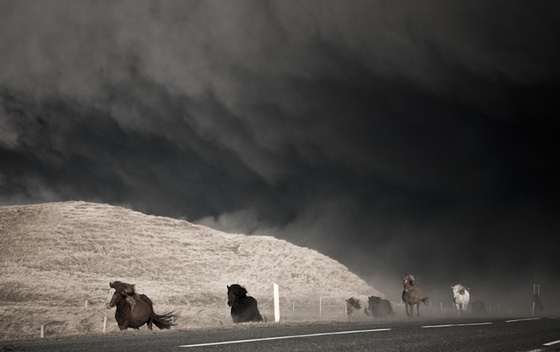 Because many Icelandic volcanoes are under glaciers, eruptions are frequently accompanied by sudden massive floods, called jökulhlaup (literally, glacier runs). These floods are of nearly unbelievable strength, dwarfing the Amazon for days at a time, and have the capacity of wiping out entire ranches in a matter of minutes.

The vapors emitted can pose grave dangers, as well. When Laki erupted in 1783-85, a mist of fluorine and sulfer dioxide settled over the entire country, leading to the Móðuharðindin (or Mist Hardships), which killed up to 20% of the island's human population, 80% of all livestock, and nearly wiped out the Icelandic horse. Half of Iceland's livestock died of fluoride poisoning, resulting in a famine that killed one-quarter of the island's human population. A local priest, Jón Steingrímsson, recorded: "...more poison fell from the sky than words can describe: ash, volcanic hairs, rain full of sulfur and saltpeter, all of it mixed with sand. The snouts, nostrils, and feet of livestock grazing or walking on the grass turned bright yellow and raw...All the earth's plants burned, withered and turned gray, one after another, as the fire increased and neared the settlements."

Another danger to both humans and animals is carbon dioxide formation in volcanic steam strokes. Due to its specific density (it is heavy) it can sink into hollows and dents throughout the landscape. People and animals that walk through these areas can easily suffocate.

Massive fish kills in waters, rivers and streams during volcanic eruptions are not uncommon; the fine ash sinks into the water and settles in their gills, thus restricting their oxygen intake. 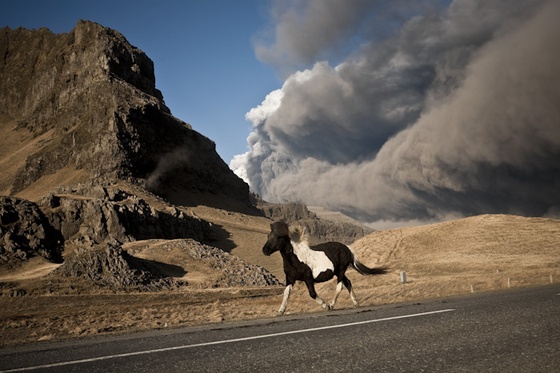 The ash from Iceland's volcanoes is hazardous in several different ways.

The ash is often rich in fluorine, and animals that drink from streams and lakes containing the ash, or eat grass covered with ash are at risk of fluorosis. The ash creates acid in the animals' stomachs, corroding their intestines and resulting in hemorrhaging. It also binds with calcium in the blood, and prolonged exposure will result in weakened bones and teeth. The first written account of this phenomenon was after the 1693 eruption of Hekla, which observers referred to as "ash-teeth."

The ash also in high in silica, which is extremely abrasive, and can lead to excessive wear on the animals' tooth enamel. It can also wreak havoc on their lungs and digestive systems.
The ash fall will also form a sort of mortar when mixed with water, and can completely seal off grazing areas once it hardens.

Amazingly, the recent eruption at Eyjafjallajökull has not led to any livestock deaths, in large part because of early warnings, the extraordinary efforts of breeders, and a bit of luck.

Shortly after the eruption began, the ashes began snowing over the ranch Skálakot where rancher Guðmundur Viðarsson, has 140 horses. He compared it to being drenched with mortar. "It stuck to everything, shoes, clothing, the walls, the ground. Then it dried and hardened. I was sure not a living thing would be able to break through it. The yard around the farm has been scraped three times; we've hauled away about 15-20 truckloads of ash. 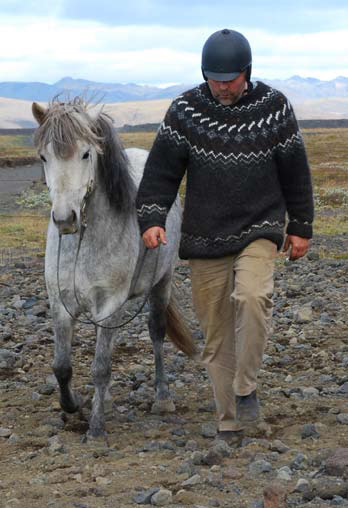 "Of course we all knew this would happen, we've been waiting for this eruption to happen," Guðmundur said. "So we were prepared. We've all helped each other out - probably 350 horses had to be rescued from the ashes. The horses took this with great tenacity, as if they had been trained in what to do if this happened, just like the humans!"

Rancher Lovísa Herborg Ragnarsdóttir, who has 80 horses at Hemla said, "It was simply disgusting here for a while, ash everywhere." She worries about the effect of the ash on the animals - "the horses are getting hairless above their hooves, the glass shards simply shear the hair off."

Scientific advances have also ensured that there was no loss of life. The Icelandic public safety officials were able to monitor seismic activity and evacuate the affected areas before the jökulhlaup.

Fortunately, the ash from his eruption did not have the high concentrations of fluorine commonly found in ash from Icelandic volcanoes. Nevertheless, the breeders have trucked in hay and water, or moved their livestock to other areas, to ensure that their animals not ingest the ash that coats everything. "Imagine chewing on a few teaspoons of sand - or broken glass - every time you eat," Guðmundur said. "Livestock don't last when they lose their teeth. It doesn't matter for pigs, chickens--animals that don't live a long time--but a mare can live up to 25 years." 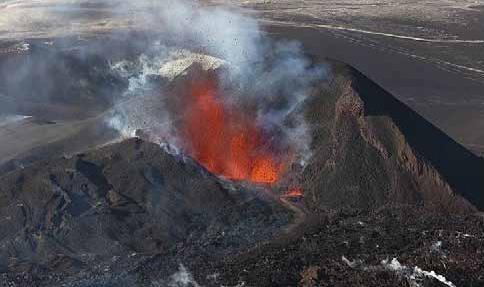 The Eyjafjallajökull, and the earlier, much smaller eruption in nearby Fimmvörðuháls, enticed tourists from around the world to see nature at its most fierce. Guðmundur realized that the eruption would no doubt have long-term effects on farmers in the area, but instead of worrying he immediately began making lemonade out of lemons: he started offering riding trips up to the glacier's edge where onlookers could experience nature's wrath first hand. "We have a private road that leads up to the glacier, and when the weather was nice, we rode up there. It was an awe-inspiring experience for people, watching the plume of ash reach ten kilometers into the air right above their feet."

Numerous foreign journalists have interviewed Guðmundur and area farmers in the last couple of months. "Many of them asked how I could possibly live in this area. I told for example, the Germans, how many people have been killed on their Autobahns annually, and if they've considered banishing them. But there has not been a loss of life here yet," he added and smiled.