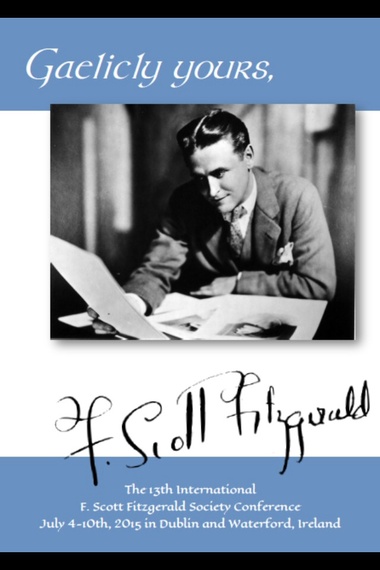 Every two years, the F. Scott Fitzgerald Society meets somewhere around the world, in a place that mattered to Fitzgerald and figured in his life or writings. The first time I attended such a conference, I was a grad student at Princeton University, and it was the Fitzgerald Centenary conference, held on campus in 1996. To celebrate his birthday -- he was born on September 24, 1896 -- hundreds of Fitzgerald scholars, readers, and family members convened within the strong gray walls of McCosh Hall, where young Scott once attended classes. I gave the keynote address on Fitzgerald's undergraduate years, 1913-1917 (you can watch me reprise it at Princeton, in 2004, here). In 2000, Fitzgeraldians met in Nice, and I drove around the Riviera, visiting the place where he revised The Great Gatsby, and where the events he would later use in Tender Is The Night came to pass. Zelda's hometown, Montgomery, Alabama, hosted our gathering in 2013.

When the Fitzgerald Society were trying to decide where next to meet, several of us put in a good word for Ireland. As a young man, Fitzgerald joked that, though he looked "Teutonic" with his white-blond hair and bluegreen eyes, he was purely a "Celt," and he happily referred to his Irish heritage in letters to family and to his early mentor, the Irish writer Shane Leslie. Ireland won, hands down, and we decided to meet in 2015 in Dublin and Waterford. 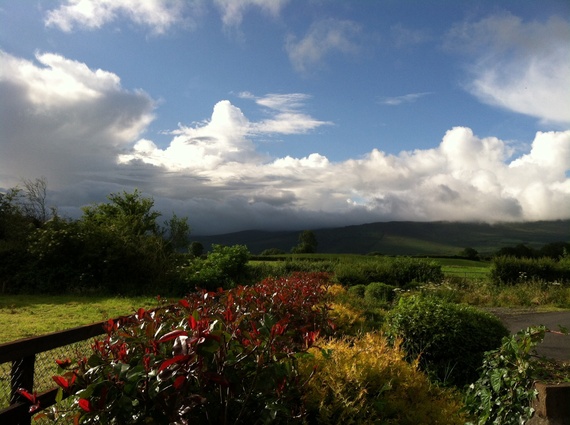 on the road to Waterford

I missed the welcoming Dublin leg of the conference, but joined the festivities for the week, starting on the 5th of July, in Waterford, driving down from Shannon past my husband's family homeplace in County Tipperary. Waterford, once a Viking port and often attacked by invaders, is at the start of what's called, without any irony, The Irish Riviera. Oliver Cromwell swore he'd take the town in 1649 "by Hook or by Crook," respectively the headland and the town bracketing the approach to Waterford up the River Suir -- that's where the expression comes from, so locals say (though it's used as early as the 1300s elsewhere). From my lovely family-run hotel on the waterfront, The Granville, I had plenty of time to explore the area on our free day, something the Fitzgerald Society kindly builds in to the schedule. 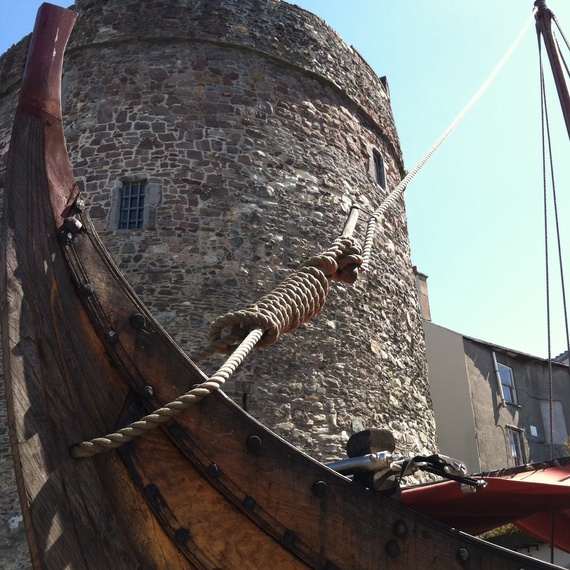 medieval Waterford is alive and well

It was odd, and completely delightful, to be at the Medieval Museum in the morning shooting a longbow and trying to read the elegant curls of the Great Parchment Book, and enjoying papers on Fitzgerald and his writing, influences, art, film, and much more in the afternoon. Presenters ranged from old friends now the leading Fitzgerald scholars in the world, to new friends, including graduate students in their 20s -- as I once was. Scott Donaldson, writer of the excellent Fitzgerald biography Fool For Love and, most recently, The Impossible Craft: Literary Biography, detailed Fitzgerald's longtime friendship, and possible brief affair (he doubts it) with Dorothy Parker. James L. W. West III, editor of the magisterial Cambridge University Press edition of Fitzgerald (reviewed glowingly in the Times Literary Supplement last week), spoke about the problems and possibilities of editing a constantly professional writer who revised drafts of his work right up to publication. Horst Kruse, author of Fitzgerald At Work: The Making of The Great Gatsby, and Sarah Churchwell, author of Careless People, discussed Gatsby in a detailed debate moderated by Kirk Curnutt, professor, novelist, and editor of the F. Scott Fitzgerald Review. Newly minted scholars like Sadaf Fahim, at her first academic conference and speaking on Fitzgerald and jazz, show you how much energy and vitality there is in literary criticism among students today.

The Waterford IT, our conference hosts, couldn't have been nicer. Posters of Fitzgerald's book jackets, and bearing his handsome face, were all over campus. At our luncheon before two plenary talks, there were delicious local dishes: poached salmon; new queen potatoes right out of the ground. There was even a huge cake in full 1920s style, draped in fake pearls and sporting a real peacock feather. 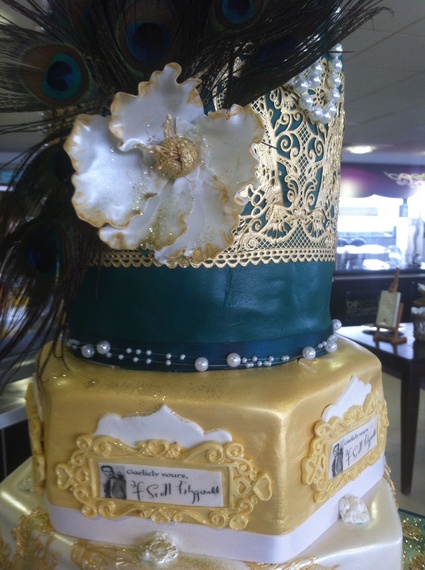 a cake for the (jazz) ages

We gave our papers (mine was on Fitzgerald and Shane Leslie), listened to those of others, talked Gatsby and Tender and far obscurer writings over good food and pints of Guinness and the occasional glass of Champagne. When we ventured out into the town, Waterford welcomed us. When I first came to Ireland in 1993, there was, it seemed, no coffee in the country. What there was, in big hotels in the cities, was not to be drunk. My, has all that changed. The best cappucino in Waterford, among the many coffee-shop choices in the city's pedestrian shopping zone, is to be had at Arch Coffee. Open only a few months, Arch serves coffee roasted by 3FE of Dublin, and the line in the morning is long. George MacDonald, co-owner and local, gladly gave me tips as to where to go in town and what to see -- and, for which I will be ever grateful, he sent me to the beach at Annestown. 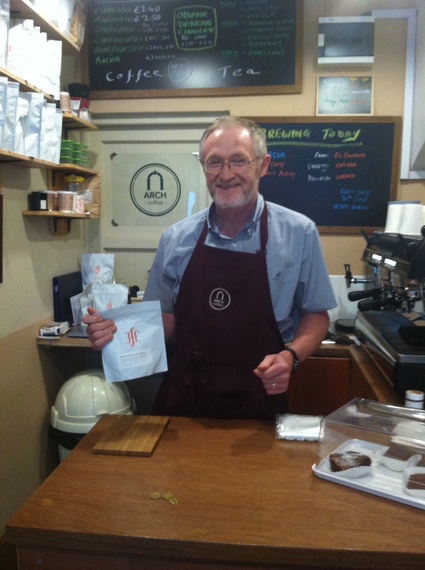 Tramore is one of the most famous Irish beaches, but, when you go, drive on past it to the west and south. The Copper Coast, so-called for the copper mines that once dotted its green clifftops and spilled into the caves at surfside, truly is a riviera. Palm trees snuggle into gardens among the masses of blooming fuschia and montbretia. Around every bend of the thin R675 is another gasp-worthy view. I pulled over and took short cliffwalks time and again, or just paused at the edge of a pasture and stared. Annestown has the interesting distinction of being, so they say, the only town in Ireland without a pub. It makes up for this aplenty with a lovely sandy beach -- so unlike the classic Irish pebble beach. Oh yes, the water was cold. Oh yes, I swam, at both high and low tides. 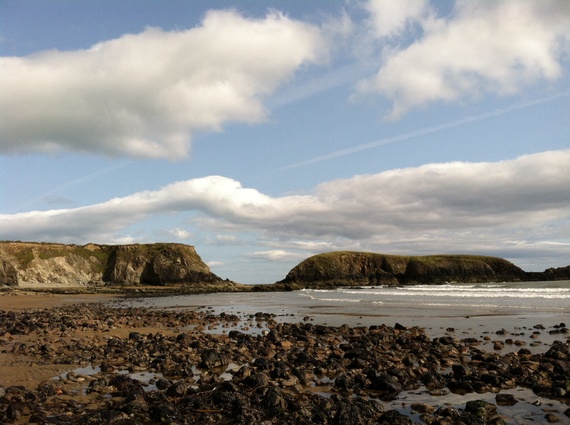 Annestown beach under an Irish sky

On around the coast, Samuel Beckett intruded into the day. At an abandoned industrial site in an improbably beautiful setting, I stopped to check out the tumbling stones and surviving chimney of a 19th century copper mine. Hard by the entrance, someone had left a pair of hiking boots to air. No one was there. All of Ireland is waiting for Godot, I thought. I looked carefully in ditches, and even shouted, where there was no one to hear, "Estragon! Gogo!" Somewhat mercifully, there was no reply. Fitzgerald had a great sense of fun. If only he had lived to be 57, as many do, I think he'd have loved Waiting For Godot. 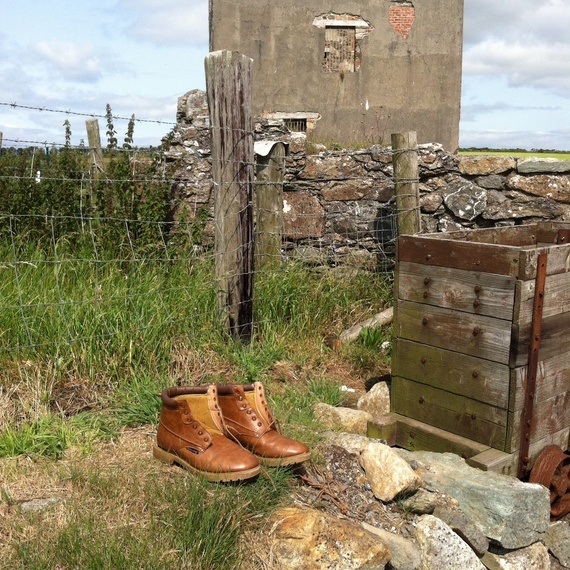 boots must be taken off every day....

I've been to Ireland many times before, but never to Waterford. Fitzgerald brought me here -- and to the Irish sides of his family, both the McQuillans and the Fitzgeralds, I'm grateful. Waterford is full of Fitzgeralds, haberdashers and chartered accountants and, perhaps, writers yet to be published. In 2017, the Fitzgerald Society will be meeting in St. Paul, where he was born, where his daughter Scottie was born, and where he rewrote and finally received word of the publication of his first novel. I'm already looking forward to Minnesota -- and to returning to Waterford soon. 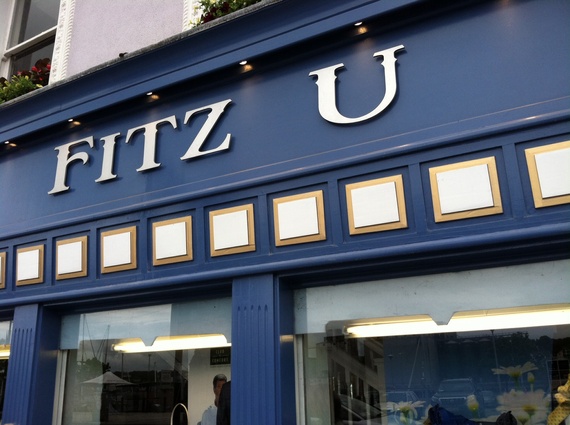