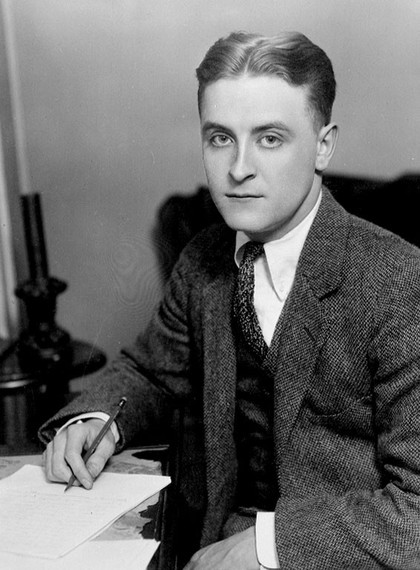 F. Scott Fitzgerald as he was beginning to think of Gatsby, in 1921.

Once upon a time, there was a bright, successful young novelist. He had had great acclaim, and sales, with This Side of Paradise (1920), published when he was only 23 years old. He followed it with The Beautiful And Damned (1922), which didn't impress as many people, and did not sell quite as well. What would be his next novel? Or would he now stick to his short stories, which were popular and could be collected in book form? Or, perhaps, he'd write plays, as he'd done before in high school and college, and with which he longed to have a hit or two?

Initially, Fitzgerald thought he'd write about an earlier time period next. He wrote to his editor at Scribner's, Max Perkins, "Its locale will be the middle west and New York of 1885 I think. It will concern less superlative beauties than I run to usually and will be centered on a smaller period of time." By 1923, he'd changed his mind, and the story: "I want to write something new - something extraordinarily beautiful and simple and intricately patterned." That something was The Great Gatsby, which Fitzgerald began in the wake of wild times had with his wife Zelda, their friends, and total strangers in New York City and on Long Island in 1922. Fitzgerald wrote steadily through 1923, and had a first draft of the novel finished by April 1924. In the middle of that month, Scott, Zelda and their baby daughter Scottie sailed for France and took up residence on the Riviera, where they thought life would be less expensive and more peaceful (!). Scott began to revise.

The story and its characters, as published in April 1925, are known too well for me to list details here. Yet for those who think Fitzgerald just tossed off stories effortlessly, because of his youth or talent, think again. He was a professional writer from the start, and remorselessly put his work (even when constraints of writing to pay bills permitted him little time) through revision after revision. He wanted Gatsby to be, well, great. He grappled with everything from individual words to the order of its sections, and its title (which he tried, too late, to change to Under The Red, White and Blue). He once included a scene where Nick, Jordan, Daisy, Tom and Gatsby go to a baseball game. At one point, there were two green lights at the end of Daisy's dock.

Today, the earliest surviving manuscript draft of The Great Gatsby rests in a high-security, climate-controlled vault in Princeton, New Jersey. It is in the Manuscripts Division of the Princeton University Library, but can be viewed online, along with the Gatsby typescript, and heavily reworked galleys. However, this manuscript is not the first draft of the novel. Only two pages of that survive. And, today, they're safely in the vault with Fitzgerald's later draft.

How do we know these two precious pages are from the first draft? Where did those pages come from? And why are there only two? Here's the story. In 1978, the dean of Fitzgerald scholars, Matthew J. Bruccoli, wrote a note for the Princeton University Library Chronicle about a recent gift from Charles Scribner III. Scribner bought, at auction, and donated to his and Fitzgerald's alma mater a Fitzgerald letter to Willa Cather, written in the spring of 1925. Fitzgerald was still living in Europe, and had just seen a copy of Cather's A Lost Lady (1923). He became alarmed that she might think his character, Daisy Buchanan, was too similar to Cather's Marian Forrester, the flawed heroine and title character of her novel. Fitzgerald didn't have an emailed or time-stamped document to offer Cather to show the evolution of his own character -- he had something better. He wrote to Cather from the hotel in Capri where he was staying, explaining:

Now my expression... was neither so clear, nor so beautiful, not so moving as yours but the essential similarity was undoubtedly there. I was worried because I hated the devil to cut mine out so I went to Ring Lardner and several other people and showed them mine and yours and finally decided to retain it. Also, I've kept the pages from my first draft to show you and I am enclosing them here.

Cather found no objectionable similarity, and told Fitzgerald she was looking forward to his book. She wrote back, "So many people have tried to say that same thing before either you or I tried it, and nobody has said it yet... After all, the only thing one can tell about beauty, is just how hard one was hit by it. Isn't that so?"

Here is Fitzgerald's first attempt to describe the voice of character he calls, in the two pages of the draft he sent Cather, Ada Fay: "The sentences were songs. There are no words to describe such voices but there is a promise of gay things in them of something magical done or yet to do." The draft also mentions Fitzgerald's narrator, named Dudley at the time -- and nicknamed Dud. He re-thought "Dud," perhaps in the relatively new terms of slang for a bomb that fails to go off, and Fitzgerald eventually renamed Dud Nick.

In December, 2011, I was going through Fitzgerald's correspondence files, and paused at the letter to Cather. It was published years ago and I was familiar with it. Yet when I turned the page, I saw that the enclosure was still there in the correspondence file too -- resting quietly at the back of a plain brown folder, the only two original pages of The Great Gatsby. Sure, I've spent plenty of time in archives, looking at wonderful things. But this was, as I said at the time, far beyond a thrill.

Believe me, I took my time over those two pages in Fitzgerald's beautiful handwriting, looking carefully at every cross-out, where words had been erased, and watching -- as closely as one ever could, now -- a writer I love in the act of creating. Then I walked up to the reading room desk and made a sequester request, asking that the original pages be replaced with reproductions. The originals are now with that later manuscript of Gatsby, in the vault where they belong. 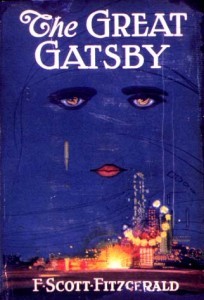 We have Fitzgerald's own word that these two pages are from the first draft of Gatsby, and that's good enough for me. Where is the rest of that first draft, though? Evidently, it did not survive. Maybe, some day, in a forgotten box in a Hollywood studio archive, in someone's attic or basement or a storage unit where the papers have been lost in passing time, in a trunk left behind in a rented Riviera villa or Paris apartment, that first draft of Gatsby will surface. Those pages and pages of pencilled prose, written in that elegant looping hand, may be read for the first time by someone other than Scott and Zelda -- one of the most familiar stories in literature, in its first, original form.