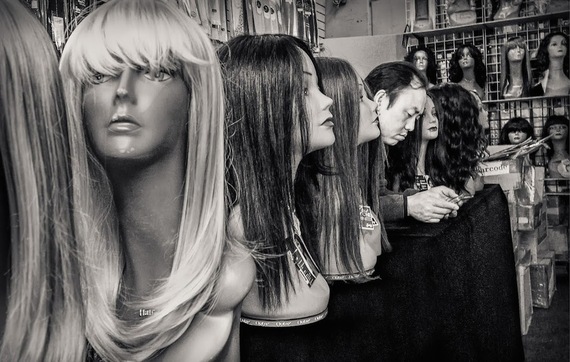 Ask any veteran street photographer and they'll likely recall with excruciating detail "the one that got away."

Can there be a worst feeling as a photographer than fumbling with your settings while watching an opportunity disappear?

Sally Ann Field, a Los Angeles art director turned photographer, had a split second to capture this image before the moment passed. She was wandering around taking pictures in Santee Alley, a popular shopping area in L.A's Fashion District, when she came across this wig shop.

"When I saw this shopkeeper's head between all of the wig heads I couldn't believe it!" she says. "I only had time to capture one frame before he saw me and disappeared from my sight."

What she got was a wonderful juxtaposition -- a scene that takes a moment to realize that one of these things is not like the others.

Sally had her Canon 5D MIII set at f/8, a setting many documentary photographers and photojournalists use as their go-to aperture. (The legendary street photographer Arthur "Weegee" Fellig is often credited with first coining the phrase "f/8 and be there.")

By setting the lens at f/8, Sally created a wide depth of field, meaning that everything from a few feet in front of her to the back of the shop was going to be "reasonably" in focus.

The margin of error that a wide depth of field (DoF) gives you is especially useful if you're using manual focus. At f/8 or above, it means you can swing your camera up quickly (or shoot from the hip) without having to worry about fiddling with the focus, as long as the subject is within the zone of your DoF. The fraction of a second it takes to hunt for focus can make all the difference in the world in candid street photography. Manual focus also avoids the frustration of your camera's autofocus latching onto the wrong element.

Sally, who used autofocus to capture this moment, concedes the picture isn't perfect -- it's not as sharp as she'd like. Her shutter speed was 1/15th of a second when she would have preferred something closer to 1/100th of a second. But the beauty of street photography is that it's less about perfection and more about capturing the moment. Besides, real, non-staged situations are rarely "perfect."

"I am fascinated by people," Sally says. "Portraiture and street photography have become my main focus and I am just beginning to shoot commercially."

It helps that she lives in L.A., a veritable street photography paradise. Though she enjoys photographing the diverse characters on Hollywood Boulevard and wandering among the downtown skyscrapers, her favorite place to shoot is around the Westlake / MacArthur Park Metro stop at Wilshire Boulevard and Alvarado Street.

She says the gritty Westlake neighborhood gives her the most honest glimpse of the city she loves.

"No tourists, no business people, just life," she says. "And the best pastrami sandwich you've ever had at Langer's Delicatessen is right there, too. Old school L.A. at it's finest."

Featured image by Sally Ann Field. It is used here with permission. You can see more of her work here. A version of this article was posted at Cosmic Smudge.