YNS caps off a championship season in Philly

Yannick Nézet-Séguin primed the Philadelphia Orchestra in Philly, in preparation for their current European tour, which includes performances in Vienna, Dresden, Paris, Luxembourg, Cologne, London, Berlin, el. al, over three weeks. It is the first European tour the orchestra has been on since Nézet-Séguin became musical director of the Fabulous Philadelphians three years ago. 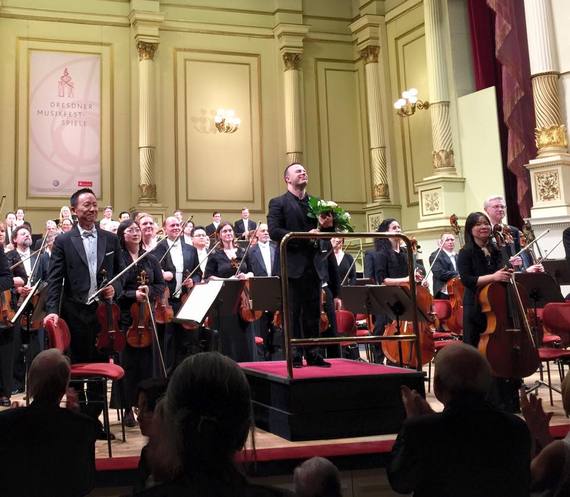 The orchestra was not resting up before the journey, they concluded their 2014-15 season here with two of their most vibrant programs. Nézet-Séguin collaborated with opera director Kevin Newbury for a full re-staging of Leonard Bernstein's MASS that marshaled area singers, musicians, actors and dancers to make it an truly musical ecumenical event, some 250 performers joining forces for the production. With a short rehearsal cycle, it all came together, however bumpily, for the four sold - out performances and for all intents and purposed was a 'communal happening' if not a musical season highlight.

In 1971, by all accounts, Bernstein poured his musical soul into the work with a mosaic of symphonic and choral structures, Broadway songs and rock elements. Bernstein was also weighing in on social issues at the time as the Vietnam War and social unrest dominated the news. His narrative of a religious leader 'The Celebrant' loosing his religion in the face of congregants who see the church as disconnected to the modern world. Bernstein may have been controversial at the time and dismissed by influential critics, but has since been revived successfully and the themes resonate more than ever.

At the end, the audience's lusty approval of the performance thundered on. Nézet-Séguin, visibly exhausted, returned to the stage to answer questions about the performance. "You have to open your heart basically, and everything works....well maybe not as easy as I'm pretending," he joked. He admitted that all came together, magically, in a few days "that tells you something about the piece. It's hard to express...it's an especially emotional moment for Me." the maestro said. "the purpose of this was community, of all ages, of all background...came together, beautifully because of Bernstein's music." 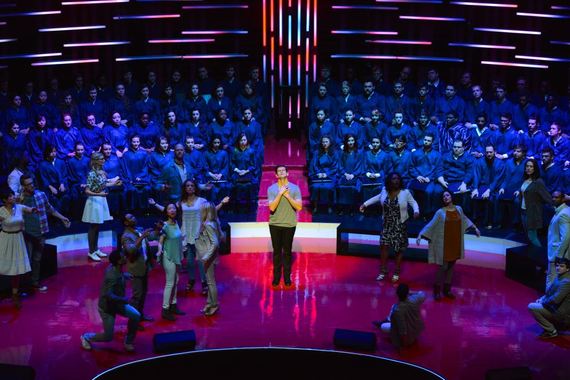 Less than two weeks later, the hall was once again sold out for violin virtuoso Lisa Batiashvili playing Shostakovich's violin concerto. It is a dazzling musical concerto, full of earthy mystique, fully illuminated by Batiashvili. Shostakovich composed this work at the height of his powers writing subversive music about oppression in Soviet Russia that had to escape the censorship of Stalin's regime. Batiashvili's vibrant artistry revealing her complete understanding of this masterpiece, notably during her cadenza that folds into Shostakovich's lustrous finish. Batiashvili will be on the tour performing this piece.

Also on the program was the orchestra commissioned work by much in demand composer Nico Muhly called "Mixed Messages." Nézet-Séguin told the audience in comments after the concert, that he wanted the work to have aesthetic connection to the Shostakovich work and the third piece, Rachmaninoff's Symphony no. 3. Muhly's own innovations of cross- symphonic rhythmic streams, succeed in every way. There is musical dna in those works shading elements of it, exemplar of how Nézet-Séguin builds musically lucid programs. Yannick considers Muhly " one of the best new composers in the world and so it's in the Philadelphia Orchestra's tradition to champion new composers."

Sergei Rachmaninoff 's Symphony no. 3, composed in the mid-30s, was also a commission by the Philadelphia Orchestra. It has a surface of the composer's signature romanticism, but he blasts through that shape shifting to something more aggressive. The tempos are sharper, the orchestral counter streams more volcanic, the lush salon orchestrals blooming, along with Rachmaninoff's sonic shadows. One of Nézet-Séguin signatures is to rediscover the power of often softened symphonic works and this is a great example of that detailing.

For more information about The Philadelphia Orchestra on tour and their upcoming season go to www.philorch.org