With good reason, Roberto Fabelo is known as the Daumier of Cuba. His work is daring, bold, and not a little controversial. But it's so well done that you praise its invention and execution more than you condemn any subversive content it might broach. "Fabelo's Anatomy," curated by Juan Delgado Calzadilla for the Museum of Latin American Art shows that he's a Surrealist Da Vinci, as well.

Talk about a cornucopia of the imagination. He begins with real things. Pages from an old anatomy book, Chinese silk. Then, somehow, words can't describe the process he invokes, Fabelo peoples a planet with wondrous creatures. It's as authentic as a dream come true. 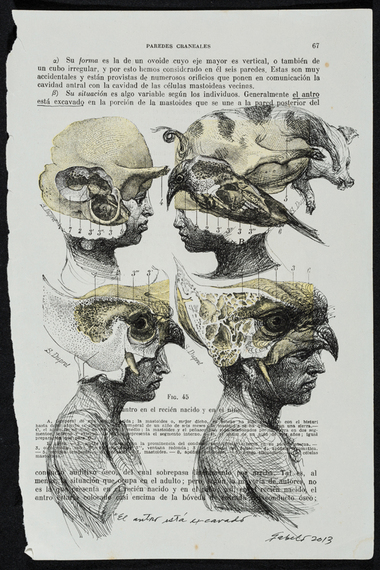 The Joint is Excavated, 2013, mixed media on paper

It might be how he riffs on the pages of an old anatomy book. He begins with a given illustration of a tendon, a muscle, or an organ. From there, the sky's the limit. That's what attracts us to this work. It's emerges from what is already familiar, if not obvious. It might be the way he lays embroidered Chinese silk on the canvas and paints over it. This gives the otherwise incredulous figures real texture and, thus, even more credibility.

You first notice the works' precision. The work seems whimsical and dreamlike. Because Fabelo makes it so true to life, though, it seems grounded and possible. With its magical realistic plausibility, it resembles something out of Cirque du Soleil. We find women with beaks, with wings, with bird-hats. There are people with tails. Though each character wears a phantasmagorical expression, we concede their existence as the most natural thing in the world. 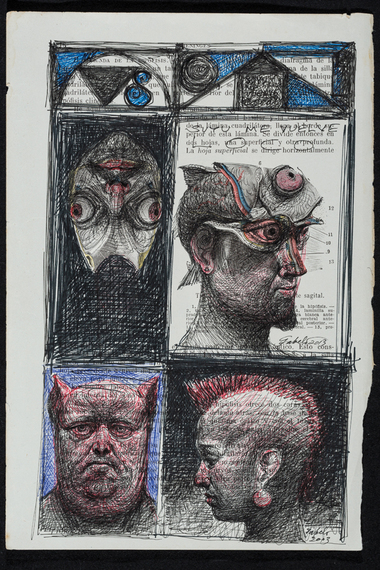 The consistency of these images makes them credible. They live in a coherent if somewhat gloomy space. They convene, as normal folk do. They could be plotting some diabolical conspiracy or else just getting together for a chat. Fabelo makes the weird and quirky seem status quo. He convinces us, with magisterial authority, that these beings are plausible if not already among us. They don't haunt as much as they seem willing to communicate in God knows what language. We don't approach them with xenophobia. No, we approach them more with a sense of curiosity, awe, and childlike wonder. The show gives us the chance to meet the citizens of this magnificent and idiosyncratic world that he creates. 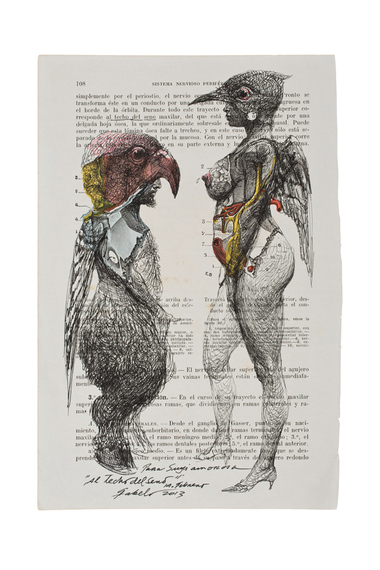 The installation further enhances the work's credibility. There's enough space to let each painting breathe like a fine old wine. The anatomy book drawings lay under glass in the center. It's as if you're either looking at a rare book collection or else at Audubonesque renditions of exotic creatures. The show reads like the confirmation of a species that we suspected existed in our dreams, but didn't realize until now that we could meet it face to face. 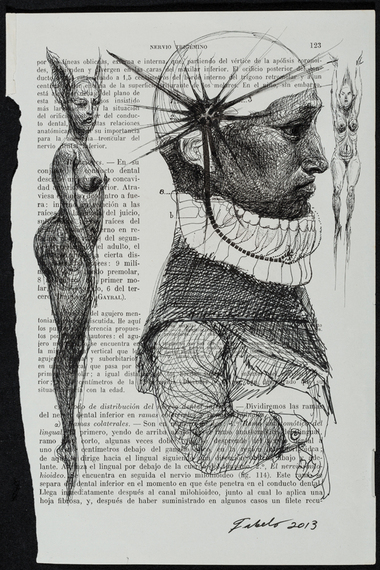