This series is about taking storytelling beyond storytelling and letting your children connect the dots between stories and science. Part 1 carried some great examples. Here are some more fabulous ones.

Mythological Reference: There is a story of how Rama's sons came into being. Sita comes to live in Sage Valmiki's ashram and gives birth to a son called Luv. One afternoon, Sita leaves Luv in the care of the sage and retires to her room. Sage Valmiki goes into deep meditation and upon coming to, he realizes that Luv is missing. Worried that Sita will be devastated, he quickly creates a clone of Luv from a grass blade called Kusha. The clone is named Kush. Luv is found later and they become famous as the Luv-Kush duo.

Today's science: Cloning is a stupefying reality today. This medical research paper on Stem Cell Research and Cloning says: "Since early 1997 the United States National Bioethics Advisory Commission (NBAC) has been looking at the complex issues that surround this controversial subject. NBAC reached a conclusion in 1997, when it reported back to (Former) President Clinton, that a moratorium on human cloning would be advisable". 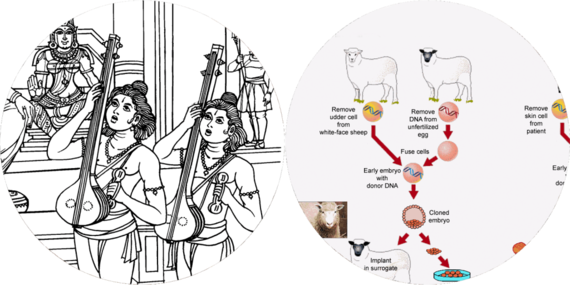 Mythological reference: In the Indian epic, Mahabharata, the 100 antagonists Kauravas develop as embryos outside of their mother's womb. All 100 of them emerge as fully-developed babies after the gestation period.

Today's science: In-vitro fertilization is widely accepted today as a procedure to assist with conception. This article explains the process which is close to the incident described above.

Mythological Reference: The Mahabharata describes the magical palace of the Pandavas famously called the "Palace of Illusions." Nothing in the Palace was really what met the eye. Walls could be walked through and seemingly 'empty spaces were really walls. A water-pool could actually be walked on and what looked like a safe plank was really water.

Today's science: Today, illusory architecture is a reality as described by this article on TrendHunter, replete with Optical-illusion walk-throughs and magical stairways. 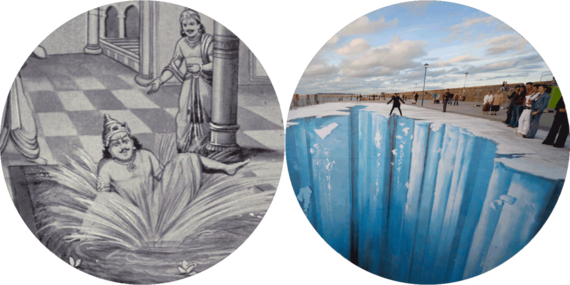 Mythological Reference: Duryodhana, the antagonist in the epic of Mahabharata, is an expert in the technique of "water-resistance" or "Jalastaambana." Before his final battle with his rival, Bheema, he meditates underwater, thereby gaining extra-ordinary strength,flexibility and agility. 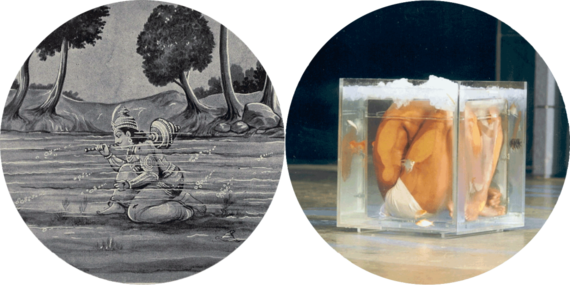 10. The movement of Saturn:

Mythological Reference: Indian mythology and Astrology refer to the personification of Saturn as having a blue body and a limp- which prevents him from moving fast. Out of all the planets close enough to influence a person's horoscope ( Mercury, Venus, Mars, Jupiter and Saturn) - it is said that the transition of Saturn takes the longest at seven-and-a-half years. Several stories demonstrate this prolonged influence by emphasizing the malefic effect of Saturn.

Today's science: It is well-established that Saturn's Orbit around the Sun is around 29.5 earth years (10767.5 earth days) - the slowest among the influential planets mentioned above. (Reference: Pride of India, Samskrita Bharathi)) 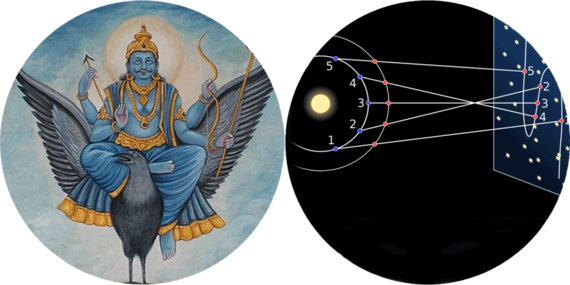 To see more fabulous examples connecting science and stories, look up Part 1 and Part 3 of this series.

This article first appeared on www.kidskintha.com

Were you bowled over by something your child just said? Let us know at www.kidskintha.com and we will help you cherish it forever!

More:
Parentsmodern parentingsciencebedtime storiesmythology
Newsletter Sign Up
Raise the kind of person you'd like to know
Subscribe to our parenting newsletter.
Successfully Subscribed!
Realness delivered to your inbox