What's it like not to recognize your best friend's face? How about your mother's--or your child's? What sounds unimaginable to most people is a daily experience for people with face blindness, aka prosopagnosia or facial agnosia, a poorly understood neurological disorder that's in the spotlight as the result of a "60 Minutes" segment that aired last night on CBS News.

In the segment, correspondent Lesley Stahl introduced viewers to a range of people whose lives have been affected by face blindness, as well as to brain scientists who are trying to understand the causes of the condition.

Among the prosopagnosia sufferers interviewed by Stahl was Chuck Close, the well-known painter who, ironically, is best known for painting faces. When Stahl showed him a photograph of a famous face, he demonstrated the process by which he solves the puzzle every face presents to him.

"What am I thinking?" he asked when Stahl showed him the photo. "You don't see too many people with just a mustache anymore, so that means it's probably somebody who's not alive. So if it's an African-American of a certain age with a mustache, it might be Martin Luther King."

Other "compensatory strategies" used by people with face blindness include identifying people according to hair, gait, clothing, voice and other personal attributes, according to website of Harvard's Prosopagnosia Research Centers.

Faces can be tricky. Do you know this person? 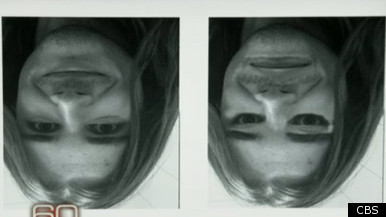 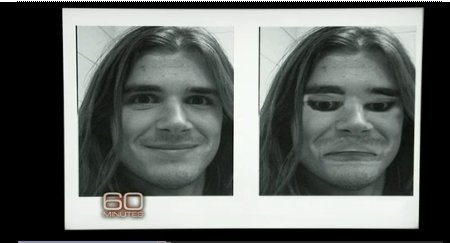 Oliver Sacks is another well-known sufferer of face blindness--the celebrated neurologist and author wrote about his own experiences in his book "The Mind's Eye." As he told Stahl, he sometimes has trouble recognizing his own image in mirrors.

As you might expect, prosopagnosia can be socially crippling. People with the condition have trouble establishing and maintaining personal and professional relationships, Stahl explained. And many face blind people complain that they have trouble following the plots of TV shows and movies, because they can't keep track of the characters' identities, according the Harvard website.

What causes face blindness? Researchers don't know for sure, but they think it's the result of abnormal function of a region of the brain known as the right fusiform gyrus, according to the website of the National Institute of Neurological Disorders and Stroke. The abnormality can be congenital or the result of stroke, brain injury or certain neurodegenerative diseases.

CORRECTION: A previous headline for this article characterized prosopagnosia as "rare," which is not technically accurate, as it affects roughly 2 percent of the world population.

Face Blindness: '60 Minutes' Spotlights Mysterious Condition Of Prosopagnosia
TED Talks
1 / 7
Charles Limb: Your brain on improv
We think that at least a reasonable hypothesis is that, to be creative, you have to have this weird dissociation in your frontal lobe. One area turns on, and a big area shuts off,so that you're not inhibited, so that you're willing to make mistakes, so that you're not constantly shutting down all of these new generative impulses.